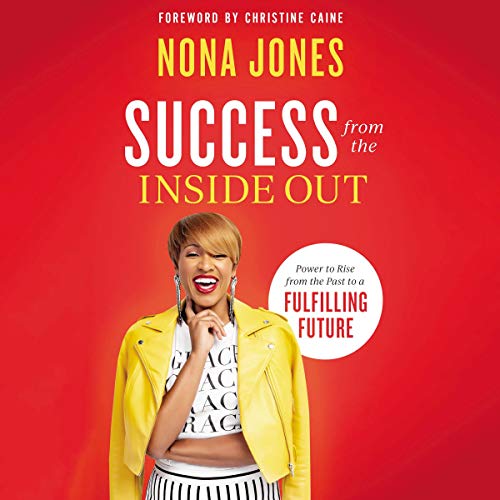 Success from the Inside Out

In Success from the Inside Out, corporate executive and leadership speaker Nona Jones takes you on a personal journey to discovering the difference between success that empties and success that fills.

Many of us aspire to achieve position, wealth, and notability in the hopes that those things will erase the pain of the past. But for those like Nona Jones who have experienced trauma, success requires more than a changed mind-set - it requires repairing a broken spirit.

Nona was appointed to an executive role with a Fortune 100 company at only 23 years old. Since then, she has led award-winning initiatives in public affairs, brokered multimillion-dollar business deals, addressed the United Nations, and championed juvenile justice and education policy reform in the halls of Congress - all under the age of 35.

Then, in one of the largest wake-up moments of her life, Nona realized that her past battles were waging a present war. Though she tried to push away the memories, her childhood trauma continued to affect her emotionally, spiritually, mentally, and physically - until she made a pivotal decision.

Success from the Inside Out charts the course of Nona's breakthrough - a course that can also lead you out of the storms of your past or present. Through her own remarkable story and insights, Nona helps you:

As Nona writes, "I've discovered that the only thing stronger than the power trauma has to change you is the power you reclaim when you acknowledge its effect on you." Success from the Inside Out is an empowering guide to finding healing from the past so you can move with freedom and hope into the future.

What listeners say about Success from the Inside Out

It is surring up emotion, then it brings peace! Thank you for this wonderful book!

loved it, I was able to relate with a lot of your stories. thank you for sharing

This book is amazing

I was truly blessed by this book, it captivated me inspired me and broke me all with the help of the Holy Spirit. Nona’s book has the anointing all over it, it can transform your life if you let it.

I was humbled and grateful that someone had the courage to share their story to help build and inspire those who have walked in similar shoes.

I stumbled on this book by divine accident and never before has a book touched me so deeply. I had to pray thank you God for Nona.

Continue to let your light shine and thank you very much for helping me by speaking life into my life.

I found this book incredibly helpful to me in understanding some of the decisions I’ve made in my past due to trauma. I particularly appreciate the vulnerability with which Nona shares her story and I’m recommending it to friends. I’ve learnt a lot from it and I know all those that read it will too! Thank you Nona, you are goals!!

Nona Jones in this book gives permission to everyone with a past to be at their best and live in the truth God has spoken over them in the bible. I feel so empowered and renewed throughout her words. Her honesty is beautiful and her victory is our victory, I feel like she shared a very wonderful part of herself, so that us as listeners will have the courage to revisit the undesirable places in ourselves and discover the purpose. I will be reading this book again!

This book was answered prayer. Beyond motivating, it was transparent and honest. The scripture references fit each instance. I learned so much about myself and my purpose. Thanks Nona!

Thank you Nona Jones for sharing your story! You are so inspirational! Your story will help heal many!

Nona was literally put on this earth to write this book for me! I’m changed forever!

This book really inspired me to get out of my head. The tools given were aligned with what I needed for this exact time in my life. It was a book of empowerment and encouragement. And I love the fact that the author read the book. It made me feel connected to the authors story.

This is a necessary read for anyone struggling with insecurities! Practical tools and strategies.

I really enjoyed Nona's transparent and inspiring story. The way I ran into this book can only be described as divine influence. I needed this so much for my own personal recovery. I have went through it a couple time and some nights listen to a chapter while I rest and reflect. It helps me understand me and the stages I have been going through as I'm processing and trying to grow and heal. Thank you Nona for sharing. One day I would love for my story to be a testimony to others as you have made yours. You and anyone reading this, please pray for me as I feel it's my purpose waiting to be unfold.

This book captivated me throughout. What an inspirational journey. Liked it even more hecause the author read it, thank you Nona

I am truly amazed by this book. Your story is inspiring to anyone who is looking to succeed in life. Thank you for your transparency and letting God use you.

Connected with Nona in so many ways! Found so much insight, can’t wait to listen to it again!

Loved it so much I'm getting the hardcopy so I can highlight all the nuggets. Thank you Nona for sharing your story! Not only sharing your story but having God involved throughout. Your story is very relatable in different ways and it spoke to me.