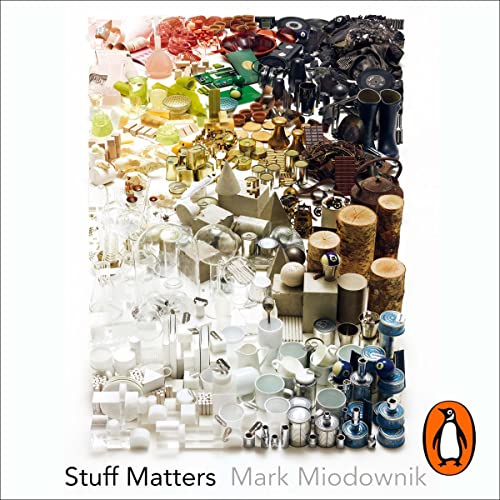 By: Mark Miodownik
Narrated by: Daniel Weyman
Try for £0.00

A unique and inspiring exploration of human creativity from one of the UK's best known scientists.

Everything is made of something....

From the everyday objects in our homes to the most extraordinary new materials that will shape our future, Stuff Matters reveals the inner workings of the man-made world and the miracles of craft, design, engineering and ingenuity that surround us every day.

From the teacup to the jet engine, the silicon chip to the paper clip, from the ancient technologies of fabrics and ceramic to today's self-healing metals and bionic implants, this is a book to inspire amazement and delight at mankind's creativity.

Mark Miodownik is Professor of Materials and Society at UCL, scientist-in-residence on Dara O Briain's Science Club (BBC2) and presenter of several documentaries, including The Genius of Invention (BBC2). In 2010, he gave the Royal Institution Christmas Lectures, broadcast on BBC4. He is Director of the UCL Institute of Making, which is home to a materials library containing some of the most wondrous matter on earth, and has collaborated to make interactive events with many museums, such as Tate Modern, the Hayward Gallery and Wellcome Collection. In 2014, Stuff Matters won the Royal Society Winton Prize.

What listeners say about Stuff Matters

Mark Miodownik makes a topic that could easily be very dry, fascinating and engaging. He connects each material discussed to his own entertaining life experiences, whilst not skimping on the chemistry and physics of the matter (at least for someone who is a beginner on these topics). Chapters on concrete, metal, glass, paper, plastics and ceramics were particularly interesting as they are things we use every day and so can relate to (aerogel was cool but lost me a bit).
Daniel Weyman performs the book brilliantly and is the best reader I’ve heard so far on audible (I’ve listened to at least 20 books so far).

Phenomenal book into the science of materials and their importance to the fabric of human existence.

It has transformed my understanding of and appreciation for everyday objects! I will never look at our material world in the same way again.

I really loved the book and the chapters on chocolate and silicate are quite awesome. I recommend every material lover to listen it and it really worth listening 7± hours to the stuff.

Found some of the ways in which the content is delivered very difficult to endure.E.G The western movie scene in Chapter 6

Brilliant! Both entertaining and fascinating!!

One of the best audiobooks I have ever listened to. Bravo dear Author - really great stuff!!! And very well read by the Narrator!

the author really seems to be able to move from one interesting material to another with ease. concepts are well explained, i lile the personal touch and even if you know a little about materials, this audio book will keep you engaged.

Good book overall. It is not only focused on material scientific as I expected, there are big sections on the emotional effects of materials and personal stories.

Had I tried reading the book myself there's no way I would have been able to concentrate long enough, given the subject matter. The narrator brought it to life.

Brilliantly accessible, insightful and inspiring science behind the materials around us. Highly recommended to all.

the book os great! I never tought a material's science book would be so interesting

Comprehensive and a great summary

Touches base on multiple materials that are present in our everyday lives. The summary truly is brilliant. If you want to know more about elements, materials and the way they interact with each other. I highly recommend this audible. The narrator is fantastic as well!

I love how Mark tells about different material with stories and example. I was afraid it would be a boring read, but turned out exactly the opposite. If we would be thought like this in school, more people would become engineers.

Excellent, More of Such Titles are necessary

Too much listening to Cosmos, stars, black holes, and galaxies. And so are string theory, quarks, gluons, leptons, hadrons....This is one of different from these subjects. This is all about everyday things that we always wanted to know. More of such books on other scientific disciplines, like Condensed Matter Physics and Engineering are now required.

For me, a science lover, this book is one of the best.
Not only the contents, the pronunciation of the reader is very good and easy to understand even for a foreigner.
I bought both a reading data from audible, text for my kindle.
I say again, I love it.

Why You, yes you should try it

Truly an eye opening book.
At first I wanted a nice science book to read,
I never thought how interesting this one would end up being one of the greats.

In sort, This book is a collection of stories centering around material science.
You can feel that the writer prioritized the story above the knowledge, the knowledge is the cream while the stories are the cake. you come for the cream, but stay for the cake.
truly a marvelous book.

Mark Miodownik explains material science in a simple and memorable way using a novelistic style that captures the listener’s interest. Recommended to anyone curious to understand the materials world we live in.

I absolutely loved this book! it's really well written, it flows easily. The information is really interesting and well presented. The book was also read very well. Will recommend to everyone.