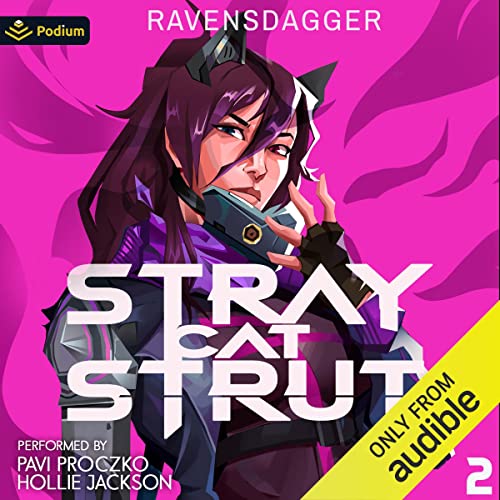 A young warrior discovers her true potential as a cybernetic samurai battling conspiracies and aliens in this original, action-packed cyberpunk series.

There’s always a need for heroes in the city of New Montreal. So when a young girl is kidnapped by business-backed mercenaries, Catherine “Cat” LeBlanc—who’s been a cyber-samurai for little more than a day—teams up with pyrotechnic nun-samurai Gomorrah to determine why a corporation would target a child . . . and what exactly they did to her.

Having only recently ascended from your average nobody to what many would consider the pinnacle of humanity, the inexperienced Cat is overwhelmed, to say the least. She’s worried about how her girlfriend, Lucy, will react to the changes, and wonders whether she can use her newfound power and growing influence to care for her “kittens,” a group of orphans in her charge.

Meanwhile, as if black-ops assassins and their corporate masters weren’t dangerous enough, the alien Antithesis have infiltrated the mining town of Black Bear. Capable of mimicking inanimate objects, the aliens could be anywhere—and anything. Rooting out and combatting these shapeshifting aliens would be a chore for even the most seasoned samurai. For Cat, it will test the very limits of both her fighting skills and her ability to save lives.

The second volume of the hit LitRPG sci-fi series—with more than four million views on Royal Road—now available on Audible and wherever ebooks are sold!

So I want to start by saying I love the series so far. However, I feel like the main characters priorities/experience need to change. Priorities top 5 are Sex with girlfriend, sex with girlfriend, sex with girlfriend, helping kitties, samurai stuff. Her AI is great however she gets these ears to help her out and uses them maybe 2 percent of the time. To me she should be using them all of the time equaling more experience and survival instinct. Personally I think the AI does 95 percent of the work and if it weren't for requiring a Body it would do all the work. MC needs to readjust her priorities at least a little. Other than that books great. At time of review she is investigating with Gamorah for the missing girl.

I burned through the first book but the second is taking a hard time to get through. A lot of wasted time in between actual plot progression. Too many chapters to world build with opening blurbs rather than doing it naturally. Overall a good work with room for improvement.

This story is as 🔥as chlorine triflouride

Pure unadulterated snark. It’s all of the best of cyberpunk LitRPG tropes with emotional intelligence and self awareness.

Great, but the first was a bit better

Really great story and narration. I just enjoyed the first book more because it had more action in it. This one is a bit slow until the second half. But it was still great and I’m glad I bought it.

Great continue of the first book story wise. Little too much pawing thou. Had to skip one chapter because it was unlistenable. And the timeline is very compressed. Good world building. Still loking forward to the next volume.

Raven's Dagger is always good for writing stories that are fun and unique. This continuation of the cyberpunk samurai series is just as fun as the first, but goes into some different directions.

My kind of humor

I'm really enjoying this series. Both the snark and narrator's performance were above average. Give it a chance.

I'm not sure I enjoyed this one quite as much as the first, or maybe I was just expecting something else out of the sequel, but it was still quite good.
In this installment, we get to ride along as Cat and Gomorrah go on two missions, one to find a missing girl and another to protect a small town from a budding nest. in between, we have some life stuff, mainly lots of sex between Cat and her girlfriend, and also them looking for a new residence.
There is lots of "lesbianage" as I call it, and also lots of gay humor. If you have gay friends or family then you know what I mean. Basically, it is like their sense of humor was stunted at thirteen and everything is a sexual innuendo. It was a little eye-rolling, but the book acknowledges it and has the other characters react as expected.
I was happy to see a return of the pyromaniac nun. She is a fun character and her interactions with Cat are classic. Speaking of interactions, Cat's A.I. is even more of a troll in this one, no doubt absorbing more of Cat's personality. Her playful embellishments to Cat's gear are too funny.
At any rate, if you liked the first book, you will surely also enjoy this one. RavensDagger books are always worth reading.

It is by far one of my favorite book series. The characters are great, the storyline is fun and interesting. Plus the gamer aspect of it is always enjoyable and lesbians yes please.🥰🤣😃😜🤗.