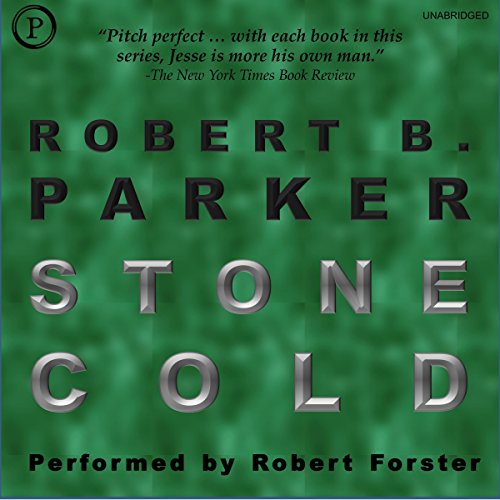 By: Robert B. Parker
Narrated by: Robert Forster
Try for £0.00

In Stone Cold, Police Chief Jesse Stone has a problem - actually, two problems - dead bodies turning up, and no clues. A man takes his dog out for a run on the beach, only to be discovered hour later with two holes in his chest. A woman drives her Volvo to the mall to do some grocery shopping, never makes it back to her house and is found dead.

Investigating a serial killer in an affluent suburban town is difficult, and with the added pressures from the town selectmen and media, the heat is turned up on Jesse. The harder these outside forces push against him, the more Jesse retreats into himself, convinced - despite all the odds - that it's up to him alone to stop the killing.

"Told in third-person prose that's a model of economy, with sharp action sequences, deep yet unobtrusive character exploration...this is prime Parker, testament to why he was named a Grand Master at the 2002 Edgar Awards." ( Publishers Weekly)

What listeners say about Stone Cold

Really enjoyed this. I got after seeing the Tom Selleck TV film. Yes there are differences, but the bulk of the plot is the same.
Enjoyed the narration although in my head I could hear Tom's voice!

HE SAID, SHE SAID

With 9 out of 10 sentences ending in "SAID", it's too disconcerting to listen to. Poor writing.

A great introduction to a new (to me) character

I've been a big fan of the late Robert B. Parker's Spenser for many years, and read about half of the those books in audio form. They are always very good, and occasionally great. I had never read a Jesse Stone novel until I came across this short one in a recent Audible Sale, and seeing that it was read by my hometown hero, Robert Forster, I couldn't resist.

The book was great, and I look forward to seeking out the rest of the novels in this series, especially if they are read by Forster. I know his thick Raaachester accent irritates some who aren't used to it, but his characterizations and smooth demeanor are dead-on for this type of book. Great fun!

a lot of foul language

Although the story is very good, i did not enjoy this book because of the language

better than the tv version

This book was done as a made for tv movie and has run several times. I love the movie, but the book is much better!

Ususally I love Robert B Parker books, but found this one very disappointing...sorry, but this one was not worth a whole credit...a flop.

Loved this ! Parker, Stone, Forster at their best.

My favorite Jesse Stone narrator,combined with the best of Parker, great series, great narrator and a good storyline that kept me listening all the way through....We'll miss you Parker, Spenser, Sunny and Stone...

screenplay was better than the book

although the book is good, I mean after all it was written by Mr. Parker. but this is another book by of his in the Jesse Stone series where the movie is actually better than the book. the screenplay that is. I'm sure if I had read the book first it would have been better, but having seen the movie it kind of spoiled the book. it's usually the other way around. performance was so so , better than the first audio book's. narrator of the Jesse Stone series. definitely worth listening to, but as I said before I still prefer the movie

Great but one concern

one of the best of the series. but
(mild spoiler)
why didn't Stone give his officers a picture of the likely suspects? Seems "uncoply" of him.

Good book but for the money too short. It seems to me you are trying to just make more money and chopping your books up.

I've always enjoyed the movies with Tom Selleck in the starring role. Jesse Stone...This sort of followed the book...I pictured the scenes in my head while Rob Forester was reading the lines. I will say he has a unique style when he does read the books but I have heard better. He read the lines and did not vary his voice pattern or inflection between characters. Example, he didn't adjust at all when a woman was to speak...Unlike someone like Ray Porter who does a GREAT woman's voice...or Sarah Mollo-Christenson doing a man's voice...etc...Certainly there are better performers who read novels. But overall I was okay with it...
The story is solid and like I had mentioned I followed along like the movie playing in my head...and I saw the movies first...so it was cool. Obviously, A very different ending and certainly different relationship with Jen...but it was okay...