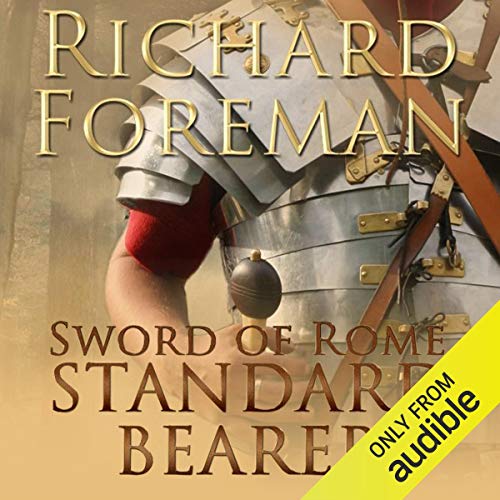 By: Richard Foreman
Narrated by: Ric Jerrom
Try for £0.00

Sword of Rome: Standard Bearer is the first book in a series of novellas featuring Lucius Oppius and the campaigns of Julius Caesar.

Britain, 55 BC: Julius Caesar’s invasion of the wild and mineral-rich land is becalmed, a stalemate exists between the forces of Rome and Britain. But the standard bearer of the Tenth Legion, Lucius Oppius, is about to display a depth of courage that will change the course of the invasion - and history.

Encamped upon the south coast Caesar, admiring the courage and skill of his standard bearer, orders Oppius to accompany a native British archer and go behind enemy lines. His mission is to hunt down a treacherous Roman agent, who is recruiting Britons to fight against the armies of Rome in Gaul. Yet not all is what it seems and Oppius will fight for his life, as well as for Caesar and the glory of Rome, to complete his mission and find his way back home.

Sword of Rome: Standard Bearer brings together history and action and adventure in a story which will appeal to fans of both Simon Scarrow and Bernard Cornwell.

What listeners say about Standard Bearer

I had to stop!

When there are so many obvious inaccuracies I could not suspend disbelief long enough to endure this. A historical advisor or a good editor is required here.

not exactly Bernard Cornwell. the story was nonsense and not very good. the narration was enthusiastic but boring

This short story baffles me. As a humorous attempt to make light entertainment from penning twisted tales of Roman history, it doesn’t really work. I sincerely hope that the author wasn’t trying his hand at an historical piece of seeing historical fiction

Nothing great about it, but good for whiling away a few quiet moments between more time consuming jobs.

After Bernard Cornwall's stories about Roman soldiers I found this pathetically slow and boring. Sad.

The reader tries to inject some interest into a rather trite story that neither engages or excites one’s interest. After enduring half the chapters I gave up. The writing is childish and simplistic.

Absolutely pointless and full of drivel, a quote from a ww1 poem for starters, just ridiculous and an ancient Briton with a strong Midlands accent doesn’t help matters! Don’t waste your time!

Fantastic Feat of Fantasy.
Brilliant Story Very Enjoyable.
I Have Listened To Several Times Over.

short but sweet, already find this version of ceaser very interesting the same as his standard bearer

Not a bad short story about a fictional Roman soldier in a campaign in Britain.

High praises for the author and the narrator. This was an easy listen and enjoyable story. 10/10

Liked it very much easy to listen too.

Liked it looking forward to the remaing parts of Richard Foreman's Sword of Rome series.

A compact side story during Caesar's campaigns

Somewhere between a short story and a novella in length, "Sword of Rome Standard Bearer" introduces a Roman soldier (Lucius Oppius) and his tight circle of comrades during Caesar's invasion of Britain in 55/54 BC. Exploring the possibility that Caesar's brief occupation of the southern part of the island wasn't entirely due to ego, Oppius is sent on a special mission after demonstrating bravery during the initial landing near Dover. A fun start to an interesting series.

The narrator is excellent.

This audio book was entertaining and I felt like I was learning something about English history and the Roman army.

I knew it was gonna be great I'm the first 5 minutes. Also, I never seen this short episodic style used in audiobooks before. So great that you can finish a story in 90 minutes!

Enjoyed it but was too short

It was an interesting listen but I would have enjoyed it even more if the characters had been fleshed out and the story had been longer.

Extraordinary story from a unique point of view

A quick (sadly) and thrilling glimpse into a historic event that echoed through history. GJC himself makes an appearance although it be rather short. As a harsh critic of this genre, this did justice to the actual story. Rather short much to my dismay.

As an aspiring author, I am checking out people who have already written and produced both a kindle and audio books. This was an interesting read for me. I was surprised the chapters were so short but I am thinking about checking out other books by this author so they are on Kindle unlimited and Alexa has a pretty decent text to speech.

If you are into Roman History, I recommend checking out this title on Audible Plus and other titles on Kindle Unlimited because you can get through these short books in not time.

Thanks for all your hard work Mr Foreman.