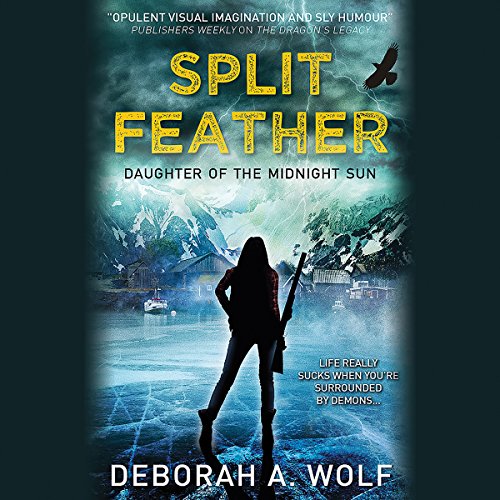 By: Deborah A. Wolf
Narrated by: Kasey Lee Huizinga
Try for £0.00

Siggy J. Alexie is a troubled young woman. Taken from her family as a toddler, abandoned by her adoptive mother into the foster care system as a preteen, she is haunted by a history of abandonment, abuse, and mental health issues. She is also haunted by a demon. Siggy sees ghosts and demons, has conversations with beings she knows aren't really there, suffers from cluster headaches, coffee addiction, and terminal bad language, and has a hot temper that just won't quit. She lives in a crappy trailer in the woods in Bearpaw, Michigan - alone, just the way she likes it. But then she goes and does something heroic and screws up her rotten life even further. She steps in to save the life of Bane, a glitter-punk rock star...who turns out to be a very gifted assassin, sent to uncomplicate a lot of lives by ending hers. Because the DNA test kit Siggy had sent in response to a junk mail advertisement has alerted some very dangerous people to the fact of Siggy's existence and a magical heritage she didn't know was hers.

Bane, in her debt, allows Siggy to escape - for now. Newly homeless, jobless, and perpetually friendless, Siggy takes the one avenue open to her; she travels to Alaska to meet the grandfather who has reached out to her. Siggy isn't sure what kind of reunion she might expect, but she certainly isn't prepared for the reality of Alaska, shabby and breathtaking at once, or the complicated dance of adoption reunion. Or fish head soup. Or a whirlpool in the river that leads to the Underworld...and the answers to questions she didn't even know she had. In order to learn who - and what - she really is, and in order to spare her young niece the same fate she'd suffered as a child, Siggy must travel to the Underworld and meet the grandmother who'd been waiting there for her, become a raven, trick a witch, and convince an arch-demon to make her a weapon fit for a hero.

What listeners say about Split Feather

Ready for the sequel!

Split Feather is a fascinating work of contemporary fantasy steeped in Inuit legend and lore. Terror. Laughter. Tension. Triumph. Sorrow. Mystery. Magic. Danger. Loneliness. And family. This book has everything.

Everything, that is except a sequel available on Audible. <bear growl>

This book was AMAZING. Brilliant narration. The humor, the way the narrator portrays various characters totally brought them to life for me. The pacing and plotting in this book are brilliant. As usual in most urban fantasy, we learn things as the main character does, however the author gives us a strong wonderful female lead who thinks things through, asks questions, acts and makes decisions. There is no romance in this book either, this is pure urban fantasy which was SO refreshing. The character does make comments about good looking guys she meets, but it is all in passing, they have more serious matters on their mind.

I really hope this is a series. Have not read urban fantasy this good since Jim Butcher.