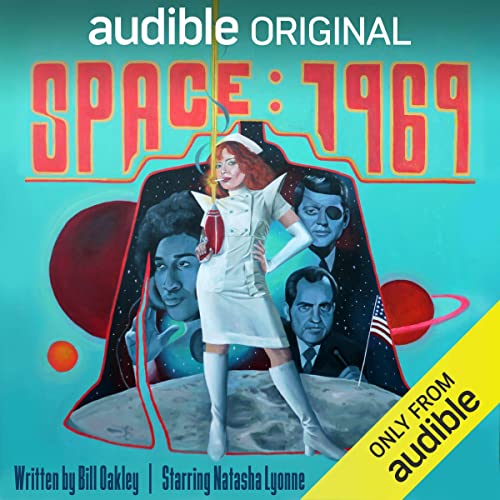 By: Bill Oakley
Narrated by: Natasha Lyonne,full cast
Try for £0.00

What if President John F. Kennedy had survived and rocketed the Space Race of the 1960s into overdrive? And what if he was, maybe, not quite...himself?

Space: 1969 is a wild and outrageous sci-fi comedy from the mind of Emmy-winning writer Bill Oakley (The Simpsons, Futurama, Portlandia).

Nancy Kranich (played by Emmy-nominated actress Natasha Lyonne of Russian Doll and Orange Is the New Black) is a night nurse on an orbiting space station. But Nancy hates her job, is sick of space, and longs to find adventure and a safe place to smoke cigarettes that won’t blow everyone up.

But when Nancy gets caught up in an outer-space conspiracy involving President Kennedy (serving his third term), former vice-president Richard Nixon (now a miserable, forgotten lawyer practicing estate law in New York City), and an intergalactic object that could change the course of history, she gets way more adventure than she bargained for.

Can Nurse Nancy save herself, the Moon Colony, and the future of the entire United States of America?

Space: 1969 is a retro sci-fi comedy adventure that has to be heard to be believed!

What listeners say about Space: 1969

Oh dear, not for the UK market

The humour, whatever there might be of it and I certainly didn't hear any, would appear to be of the American variety. So unless you like things spelt out with canned laughter and annoying music, I'd advise staying clear of this one.

If you are unaware I flag this is a number of episodes of a programme bolted together.

I was a little concerned as to whether I’d like this or not, however, I found it very funny and a great way to help boring jobs move swiftly. I suspect tho that those born after the 1970s would find some of the references somewhat obscure.
If you have a bit of a warped sense of humour like mine, then I would hope you would enjoy the brilliant silliness of it all.
Bill Oakley has a fantastical mind with an amazing imagination. And after all, there can’t be too many people who don’t like a slice of pizza pie on occasion.

NOT for UK audiences!

I'm always willing to give space-based 'funny' presentations a go, but holy hell, this is about as funny as a root canal without anaesthetic!

The voice actors do as well as they can with the awful script, and Ms Lyonne delivers her 10,000-a-day cigarette habit voice with aplomb.

If you like this kind of humour, you will love this, but for those who prefer their humour to be a bit more on the cerebral side - you will likely struggle to finish.

Apologies to the actors.
If it wasn't free, I'd want my money back!

My first ever audiobook and I’m hooked.
Innovative use of the format - brilliant structure, entertaining characters, great plot twists and pretty funny too!

I found it highly amusing. Worth a listen, I’ve recommended it to a few of my friends.

It was a nice story with a number of enjoyable characters, and some really funny moments. The story is not too complicated but it is interesting enough to be captivating for the 5 and a half hours of runtime.
Having different voice actors for all the characters really helps to elavate the experience and the music too adds to the 60s asthetics.

Wonderful for those having trouble sleeping.

if you are having trouble dropping off to sleep and downing a whole bottle of pills is not working, this is a viable last resort. I was praying for the sweet release of death by sixty seconds in.

Kennedy didn't die in 1963, he got reelected and focused heavily on the space race, which meant the USA now have an orbiting space station and a moon colony. In said space station works a nurse with bad temper that meets Jerry Lewis right before he is killed and a conspiracy starts to be unveiled. This book is very funny, it's narrated by Richard Nixon, and the constant breaking of the 4th wall works every time. Finally, it appears I could listen to Natasha Lyonne reading all day. Excellent voice actor with a particular voice that is music to my ears.

A fun listen that breaks all the right rules

Put Natasha Lyonne in your audio drama and I'm gonna listen to it. So much fun and I hope there's a follow up.

Really strong performance from the actors. I found the story really engaging and provided some laugh out loud moments. Definitely worth a listen. Recommend

If you like good writing, creative plots, outstanding acting, and superb audio engineering, this is the title for you! I loved everything about Space: 1969. It's clever, funny, and, if you are familiar with the era, warmly nostalgic. The acting is top-notch, Natasha Lyonne, playing the nurse, is just an amazing performance. The Nixon and Kennedy characters are delightfully funny and well-acted. In fact, every character is well fleshed-out and beautifully voiced. The direction and editing is tight as a drum.

What really pulled it all together is the incredible sound engineering, the sound effects, music, stereo separation, and editing are absolutely the best I've ever heard in a full-cast audio production. I've listened to thousands of hours of audiobooks, podcasts, and radio plays, but this one stands head and shoulders above them all. I really hope this writing group and production team put out more stories like this one, I will buy them all. Hats off to Audible Originals for making this outstanding performance available.

If you're happy when the lead protagonist is a self assured and saucy lady that doesn't take any guff from all the condescending men trying to put her "in her place," you'll be smiling the whole time.

If you like self-referential semi-fourth-wall breaking, you're in for a treat.

If you're an irreverent history buff, you'll enjoy this even more.

But, if you love a silly space-time continuum trope as well, you're gonna REALLY LOVE this one!

(And, why didn't Goldie Hawn get named billing? Was it her agent or the lawyers?!? She was robbed...)

I can't say enough positive things about this

Many titles have super high ratings for really inexplicable reasons (which many people have notices), but this one DESERVES great ratings.

The humour is SPOT ON, the sounds effects give great immersion without being overdone, except when it's on purpose and incorporated into the story.

There's retro drama/reveal tunes, inter-scene music bits... The story is unpredictable... Did I mention the humour and wit are AMAZING?

I hope Audible original produces more jewels like this.

Oh, and to top it all off: yes, it has the good "Audible hopes you have enjoyed this program". No audiobook is complete without it.

NATASHA IS ALWAYS KILLING IT! 💯🔊

Loved this! Will be playing over a couple more times. A we Natasha Lyonne’s voice acting is 🔥. After listening to this, I’m immediately thinking about how much more narrations I need from Natasha!! I want MORE! Get back in the studio! …Also, the music in between the chapters makes me want to shake my booty. Totally didn’t need to add that, but I also did need to.

5/5 - cannot recommend this enough. I have never listened to anything with such high production value. Was cleverly written, went by so fast. MUST LISTEN, Cannot wait for Bill Oakley's next audible original.

Because this is amazing! Season 2 please! Funny and quirky. Loved every chapter of this story!

Fun, entertaining story. Definitely made for audio... I loved the way it was like an old timey radio drama, complete with commercials, and great use of breaking the 4th wall. I just wish it ended with a conclusion, feels like it was left open for sequel?

why isn't this already a streaming series?

This book was an absolute bombshell, as sultry, mysterious, and sexu as Nurse Craddock. There were many laugh out loud moments that got me strange looks, as I listened with my headphones in public spaces.
The story line, while preposterous, is enticing and makes me wish it were possible. The narration of the cast and ambient sounds made feel like I was watching the scenes unfold right before my eyes because the cast is top-notch. I swear I was listening to Nixon and Kennedy, but Natasha Lyonne stole the show. It wasn't just the character, but the way Natasha brought her character to life.
This is one audio book that is so immersive, with 3D effects, that you must use stereo headphones to really get the whole experience. Why this isn't a Prime streaming series, I don't know! Just imagine it!

I'll listen to anything with Natasha Lyonne in it. It also helps that's its really funny and has great production with a stellar cast that really commits to the absurdity. Stong Futurama vibes. I hope Bill Oakley makes more, be it a direct or spiritual sequel, and brings back Lyonne!