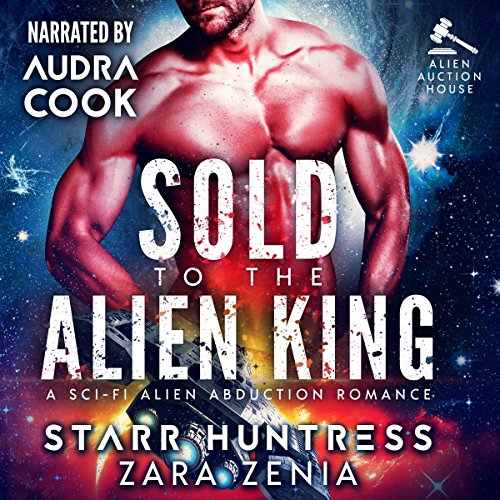 Sold to the Alien King

By: Zara Zenia,Starr Huntress
Narrated by: Audra Cook
Try for £0.00

"I’m sorry I took you from Earth. But I’ll keep you protected from being sold."

Betty is a nerd, but trying to break out of her shell. She is studying astronomy and is fascinated by possible life beyond the galaxy.

Barsork is an alien alpha shifter king but is against the idea of abducting humans, put forth by his brother.

But when Barsork takes Betty from Earth, Betty is repulsed by what his kind are doing. Selling humans off at an auction house is too much for her to take in, and she wants to get back home. Barsork tells her he will help her as he takes a liking to her and doesn’t want her sold off.

Barsork will need to first gain Betty’s trust. It won’t be easy, especially considering he was the one who tricked her and took her away in the first place.

Will Betty get back to Earth? Or will Barsork succumb to his brother’s demands and change his mind?

Sold to the Alien King is book one of the Alien Auction House series. There is no cheating, no cliffhangers, and a happy ending!

What listeners say about Sold to the Alien King

Overall a dud. Narrator is so so. But pretty bland throughout. Didn’t matter if something exciting was happening or not it sounded the same. The characters were really stupid and not very well developed.

The story line is ok

Loved the voice of Audra Cook! Brought the characters of Betty and Brain (i hope i remembered his name) anyways, the story was just ok. I kinda wanted to hear the taken down of Brains brother the king. Also, what happened to Eleanors child? So many questions and they were not answered..

The story is good and very interesting. It does pull you in and you have to find out what happens. It has action and suspense. Audra Cook's narrative is good. It is definitely worth reading and listening to.

I can’t seem to get enough of these alien romance books and the more I listen to them, the more I love them. This one had a great storyline, beautifully written, steamy, action, and kept me hooked the whole time. Loved Audra’s narration.

I enjoyed this alien aci-fi novel. It was a well-thought out story line. This is Betty and Barsork story and I really liked them both together. The story was fast-paced and very descriptive especially when they were on the alien planets. I listened to the audible version of this novel and I loved it. Audra Cook did a remarkable job with the narration and was able to make the story so much more interesting. I really enjoyed listening to this audio story.