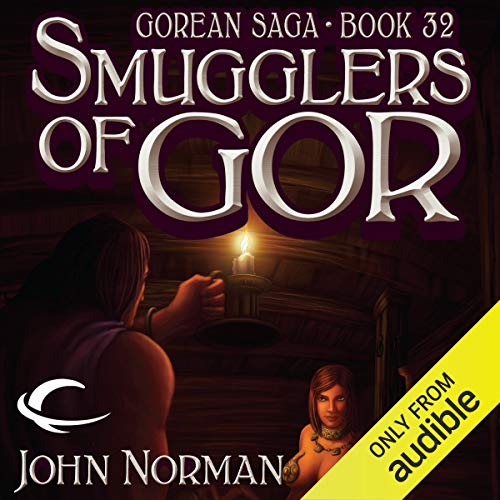 By: John Norman
Narrated by: Shannon Gunn,Lucky Summer
Try for £0.00

John Norman's epic Gorean Saga is one of the longest-running and most successful series in the history of fantasy. It is also one of the most controversial. Over the course of more than 30 books produced over a span of six decades, the series has sold millions of copies and built legions of fans unrivaled in their devotion. E-Reads invites you to rediscover this brilliantly imagined world where men are masters and women live to serve their every desire.

In what constitutes as a prequel to Mariners of Gor, we learn that a mysterious cargo, suitably disguised, was covertly placed on the great ship, a cargo that might influence the outcome of the aforementioned gamble. One narrator is a young woman, once a Miss Margaret Alyssa Cameron, and the other is an individual whose name, for reasons that will become obvious, is withheld in the manuscript. It does seem clear, however, that the individual referred to was somehow instrumental in bringing the former Miss Cameron to the height of a large slave block in the coastal city of Brundisium, one of Gor’s major ports.

What listeners say about Smugglers of Gor

The review must come in two parts as the narration is worthy of comment over and above the novel itself.

Firstly the novel;- this represents a rare piece of literary experimentation from John Norman. His idea to use dual narrators is an interesting one. It allows him too approach the topics you know he willl lecture you on endlessly (this is a Gor novel) but it also allows him to deal with more story than a single perspective narrative. For that initiative he should be commended. Alas the story does not really go anywhere. Slaver identifies potential slave, brings her to Gor and spends the entire novel claiming he SO despises her, whilst she comes to the conclusion that she really loves him. They go to the bases at Tarncamp and Shipcamp where not much happens. She runs away he recaptures her and they bond whilst the ship goes off into Mariners of Gor. and beyond. After some 52 years you are only ever going to get this if you like the series and you will know what you are getting so it does the job perfectly.

This brings us on to the narrators. The female narrator is on the whole very good, She struggles slightly when doing male voices (but that is only to be expected I suppose. They are certainly less annoying than the male narrator attempting to do ffemae voices) and more obviously with the character who has an improbable and incredibly broad Irish accent for no clearly explained reason (I'm unsure whose artistic decision that wa,s as both narrators embrace it,, but it was misconceived in my opinion They will pronounce the same name differrently so that would seem a failure on behalf of the producers. Tersites gets about 3 versions of his name as the performance unfolds.

The male narrator produces a perfomance that almost defies description. His emotional choices are occasionaly odd. The "hero" seems permanently annoyed with anyone who speaks to him. There are many points whrere I was reminded of Ian McDiarrmid scenery chewing performances as Emperor Palpatine. It is all incredibly drawn out pronunciations in an almost sneer. Others have commented on his strange pronunciations of certain phrases and how he needlessly emphasises
certain parts of words.. I was occasionally asking myself if he regretted taking the job and decided to go full ham to keep himself entertained

The male voice in this book is unlistenable. Aside from the fact that he reads as if he's is a (poor) stage magician he also cannot pronounce words either in English (wHip, wHimpering, etc) or words unique to the series, (breaking from the pronunciation previous used in the series for kajira, tabuk and even Gorean).

Where does Smugglers of Gor rank among all the audiobooks you’ve listened to so far?

What other book might you compare Smugglers of Gor to and why?

when the slave torments the FM

laughted at some of the things the slave pulled

In Which A Slaver Learns Much Of Himself

This prequel to “Mariners” is the story of a Slaver and one of his Earth Barbarian captures. We learn of secrets and conspiracy before the sailing of the Great Ship With No Eyes. Duel Narrated. I enjoyed this book very much and I didn’t expect to. It contains information that will make events in “Rebels” much clearer, but does not resolve any mysteries. We do learn more of the Panther Girls in the Northern Forests, some of whom we first met in “Hunters.”