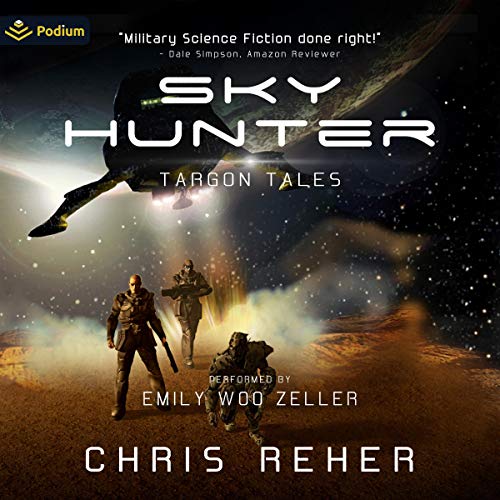 By: Chris Reher
Narrated by: Emily Woo Zeller
Try for £0.00

Air Command pilot Nova Whiteside is assigned to a remote outpost to guard the construction of a tethered orbiter, Skyranch Twelve, against rebel sabotage. The difference between the well-ordered Union air fields and this dusty garrison is made painfully clear when she runs afoul a brutal commander of ground troops.

When she is trapped behind enemy lines in a bloody uprising, she meets Djari, a civilian whose trust in the governing Union is shattered by what he has witnessed.

Indeed, not all runs according to protocol aboard the new station, and she soon suspects that more than farming is being done up there. When she uncovers the treacherous and illicit schemes taking place, it seems that local riots are the least of their troubles.

What listeners say about Sky Hunter

This is an excellent story which seamlessly moves from Space combat, to intrigue, to personal strife. Well performed by the Emily Woo Zeller, the only reason I have not given 5 stars is that the narrator gives the main character a really annoying squeak when she is trying to perform authority or anger etc, However I would still recommend this, and have already bought the next book.

A blast of soap space opera

Interesting prequel to another space opera. Good intros to characters and great performance and easy to listen to

that's why it's free

Awful weak characters. There are no redeeming features to this book. This book is terrible.

A plot so thin and predictable why bother with rest of the series. Just a free one to hook you in.

The story has a good pace with action, adventure and danger. Could not put the book down. Emily, as narrator, makes the story and characters come alive

Is there actually such a word? I suppose so now that it's in common parlance. But who ever invented the word and the concept should be strung up by their wedding tackle.
Phew! That feels better, having got that of my chest. Having said all that. I thoroughly enjoyed the book.
I remember me dear old dad calling stories and plays on the radio "Theatre of the mind". I think this, the first book in a series of books definitely qualifies as Theatre of the Mind and I look forward to listening to all that is to come even though this book is a "Prequal" GRRRRR!! (No reflection upon the quality of the book)

NO military commander on earth would berate a soldier or pilot for saving a downed pilot! This author’s version of a military is so out of sync with how real militaries work that it is disgraceful to any military member! No infantry captain is going to go cruising a flight wings birthing area and dang sure not to go into a females room and rape her. There are roving patrols and duty ncos, and camp gauds, field mps that watch birthing areas to prevent that kind of crap. This is the dumbest military book ive ever had to suffer through! Dont waste your $$$ on this garbage!

Had to remind myself this is fiction A LOT

There are certain expectations one has for good military scifi. Many times these expectations get in the way of truly enjoying the experience of a fictional story. Sky Hunter is really good at setting a world that resembles the contemporary military experience in a far flung future.

So often I myself had to remind myself that this is not a military documentary and that this is fiction. Scenarios that are presented here are not directly indicative of contemporary military realities, in my personal experience. But experience may vary.

This is a good story though all things considered very enjoyable.

This is a good author But this story has a freaky major flaw.
The story begins with a major trauma; and the aftermath is handled well and believably.
And then, nothing. The character behaves as if nothing has happened…unless it serves the story to build tension.
It’s insane.
This wants to be a well crafted story. This is a talented author. But, holy cow, they’re an idiot.

I may try another from this author

Not going to listen to crap

Having rape or attempted rape in your story is sickening. I’m not listening to crap.

I once read an essay by Ben Bova about how good science fiction has to have a link to reality--it has to be plausible, and to have building blocks on which to base its technologies and struggles and the experiences of its characters.

A military sf story needs that plus a relatable series of links to military culture and/or organization. Putting it simply, to have a good military sci-fi you have to have a story with good science AND with good military... and this story has neither.

Now, if you have the right kind of writing you can get away with that--an author can cover for their lack of science, wrap you up in the worlds of character experience and rich description so far that you never miss the lack of extrapolative fiction. But to do that the author needs to get you to just believe their world, suspend your disbelief and go with it. Here there are just too many little things that don't make any sense for me to 'go with it.'

There's a complete lack of professional behavior in a military system that is supposed to be portrayed as very professional. The medical personnel in the story display a lack of even the medical information available to us non space-faring people. The bad guys are exceedingly dumb, and yet the story treats them as though they are smart enough to 'get away with' their crimes over and over again. The main character does not behave in a realistic way when confronting either problems or the aftermath of those problems. There are far, far too many points where we're asked to suspend disbelief. And no matter how good of a story, with this many logical and logistical inconsistencies, it never should have escaped editing in this state.

Narrator is good though, and the author has good command of language.

Edit: Actually, this one was so bad that it stuck with me and I'm writing an addendum a week later. Anytime you have a character's *rape experiece* described in a way that validates the aggressor as an all-powerful monster and completely removes the options for justice, healing, or safety in the victim's world, you create a story that empowers not survivors but their abusers. This story is offensive to rape victims and military members both, and might cause damage to people who have emotional triggers for sexual abuse, rape, harassment, or violations of common decency.

Listening on my phone with only 15 minutes left I almost answered a robo call with a flashing notice "Probable Scam Likely". That's how bad this audio book was. Don't waste your time with this book.

If rape is good non stop action, get some help.

I love the narrator, that's the only reason I decided to listen to this. But that first chapter tells me this book is not for me. I'm not into reading about rape.

This was not what I expected, in all the good ways!!!!! if you want a good solid entertaining action-filled read this is the book for you

from start to finish .
heroin of top quality
and good finish .
can't wait for the next one

Very engaging from the first to the last.
I enjoyed every minute of listening.