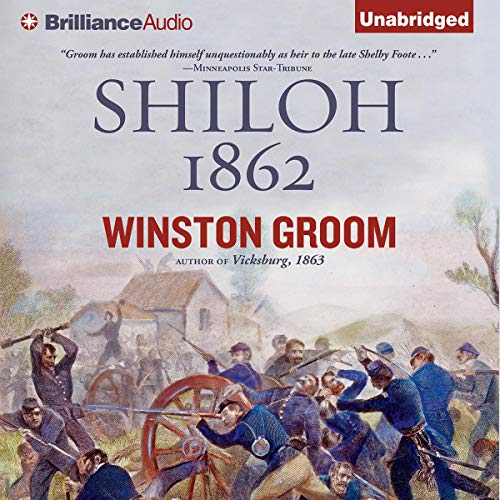 SHILOH, 1862 - The Battle of Shiloh, fought in the wilderness of southern Tennessee in April 1862, marked a violent crossroads in the Civil War. What began as a surprise attack by Confederate troops on a Union stronghold to gain control of the Mississippi River Valley became a bloody two-day conflict that would eerily foretell the brutal reality of the next three years. Pitting up-and-coming Union general Ulysses S. Grant against Confederate firebrand Albert Sidney Johnston, the engagement was a perfect storm of advanced weaponry, a West Point–educated officer corps, and a decades-long buildup of hatred that bore devastating consequences. One hundred thousand soldiers clashed in the vicious melee, and losses for both sides totaled nearly 24,000, more than had been lost during the American Revolution and the War of 1812 combined. Bestselling author and Civil War historian Winston Groom skillfully re-creates the drama of the event in a gripping, eye-opening, and heartrending narrative that highlights the major personalities, politics, and mind-set of the day. But perhaps the most alarming outcome, Groom poignantly reveals, was the realization that for all its horror, the Battle of Shiloh had not vanquished the Rebel army in the West, and the thousands of maimed and slain were merely wretched symbols of things to come.

What listeners say about Shiloh, 1862

Absorbing story of the hell of Shiloh

I am a big Civil War buff, enjoying works by Shelby Foote, Bruce Catton and James McPherson. After listening to this engrossing story I now add Groom to the list of authors who can relate epic battles like Shiloh to any reader/listener. Groom tells the story of this battle, which horrified everyone North and South with it's enormous butchers bill, by following privates, citizens and generals. The story is as good as just about any thriller. The summer before Shiloh saw the battle of Bull Run, which caused about 5,000 casualties, Rebel and Yankee combined. But Shiloh had a bill in blood of 23,000 fallen, which was more than all American wars combined up to that time. Eric Dove does a great job narrating, adding life to all the actors in this nightmare battle. Listener's will not regret this purchase.

I must admit, my exposure to Civil War histories has been somewhat sparse. However, I noticed this title and decided to give it a try. I was not disappointed in the least. Groom's history provides some wonderful personal insights from civilians and soldiers present at this tragic battle and the depth of loss experienced by all sides. I was intrigued by the personal backstabbing by senior Union officers toward Grant and Sherman. It is no wonder that the first few years of the war were so difficult for the Union with the likes of McClelland and Halleck in positions of command. Likewise, Groom's portrayal of A.S. Johnson is equally fascinating. Shiloh and, for that matter, the outcome of the Civil War would probably been much different if Johnson had not died so early in the battle.

This is a first rate history and Eric Dove's narration is superb. I looked forward to listening to the 10+ hours of the book and will probably search out additional works by Winston Groom

The overall performance was good, however, my pet peeve regarding military books is pronouncing names properly and understanding the meaning of military terms. The REAL problem with this volume are the author’s factual errors (e.g. Grant was never commander of the Army of the Potomac) which are numerous AND the author’s willingness to rehash bankrupt theories about the overall conflict. The only redeeming factor was the readers good voice.

Learn about the generals, soldiers and civilians

Not a dry analysis of the battle but rather a higher level tactical view of the moves of the generals and exploring the diaries of the people involved. Great listen for anyone with an ACW interest.

Loved the book and all of the extra details. I really liked the way Winston Groom not only told the story but also the extra stories of many of the people on both sides.
If you like history, you will love this book

One of the Best Civil War Books

If you could sum up Shiloh, 1862 in three words, what would they be?

What other book might you compare Shiloh, 1862 to and why?

Similar to Rebel Yell which is another book that took me surprise. Both were engrossing.

Stories told from both side

This was well written and narrated. I loved hearing journal entries written from both sides.

Excellent at telling the story of Shiloh in a narrative style. While not a beat for beat, regiment by regiment breakdown of events (day two is heavily glossed over), this is still a remarkable work that anyone interested in the Civil War at any level can find appealing.

Mr Groom does a wonderful job of telling the story of Shiloh, the first of the bloodiest battles of the civil war. He does well telling stories all of the soldiers the officers even civilians. But one of the best things that he does the city follows one particular woman beginning before the battle interconnection of people that fought in it. Also he thinks a little girl 9 year old girl and how her family was affected by the battle. Mr Groom really does a nice job of bringing all those little stories into what was a terrible tragedy. The narrator did a very good job also. I definitely recommend this!

Great job on narration of a historical book

Would you consider the audio edition of Shiloh, 1862 to be better than the print version?

No..only because the print version most likely has pictures and maps the reader can reference

What was one of the most memorable moments of Shiloh, 1862?

The goes into an exciting detail of moments just before the battle.

Have you listened to any of Eric G. Dove’s other performances before? How does this one compare?

Many books on historical events the reader tends to drag on. But this reader takes care to emphasize the details and characters. Even though he put in southern accents for British accents I can give him credit for even using an accent.