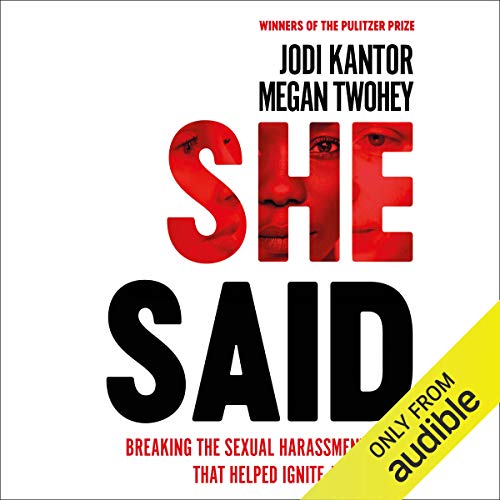 On October 5, 2017, the New York Times published an article by Jodi Kantor and Megan Twohey that helped change the world. For months Kantor and Twohey had been having confidential discussions with top actresses, former Weinstein employees and other sources, learning of disturbing, long-buried allegations. The journalists meticulously picked their way through a web of decades-old secret payouts and nondisclosure agreements, pressed some of the most famous women in the world - and some unknown ones - to risk going on the record, and faced down Weinstein, his team of high-priced defenders and even his private investigators.

In She Said, Kantor and Twohey relive in real time what it took to break the story and give an up-close portrait of the forces they were up against. They describe the experiences of the women who spoke up - for the sake of other women, for future generations and for themselves. Their stories have never been told in this way before.

What listeners say about She Said

OHHHH MY GOD - YOU HAVE TO LISTEN TO THIS!!

Hands down the best audible I've listened to in the past year. Absolute gripper - you truly get a behind the scenes look into all the work and investigative journalism that went into breaking the Trump, Harvey Weinstein and Kavanaugh sexual assault scandals.
Amazing work by Jodi and Megan

[Note: will leave you angry, towards cis-white straight men in positions of power]

I thought this would be interesting, but it blew me away. The story of how the emotional and inspirational stories of women came to be public knowledge was told so well and delivered so perfectly that I couldn’t stop listening.

The realisation of how difficult it is to prove sexual misconduct in a patriarchal world was absolutely harrowing. Jodi and Megan's expose was phenomenal, and gave many women the opportunity, and the power of solidarity, to force their assaulters to answer for their crimes. A truly wonderful read.

Clear, well narrated story of the Weinstein, Trump & Kavanagh scandals.
shocking to hear the sheer scale of the abuses carried out!

I have loved this book. I have been in tears. Incensed, cheering along the people and asking myself as woman what do I need to do to stop harassment taking place where I work and shop and gather. The courage of the victim/survivors and journalists is a powerful movement.

Enjoyable investigative journalsm but not the best

this was interesting and enlightening, but had nothing on Bad Blood / American Kingpin / etc

Many, many of us followed the story. What was horrific to me was how badly let down women are by the leaders and public faces - especially lawyers- in this strive for better situation and clarity over consent prosecution.

Jodi and Megan should be remembered forever for their tireless pursuit of the truth. This is investigative journalism at its finest. The strength of all the women who came forward to tell their stories will be remembered by us all. They have changed things for the better.

Understanding the process of how this came to light is so vital to the plight of those impacted by the non-consensual and horrific behaviour of others. Thank you to everyone involved in bringing this out into the public domain and I hope there is some peace for all that have been affected.

This is a must-read (or listen) for women and men alike. Well written and well read by the narrator.

A book that everyone should read! An excellent piece of research and a brave bunch of women involved. Flawlessly read.

Fantastic. Speechless. A historic book to leverage against any backlash for the #metoo movement. Beautiful writing and narration. Brava.