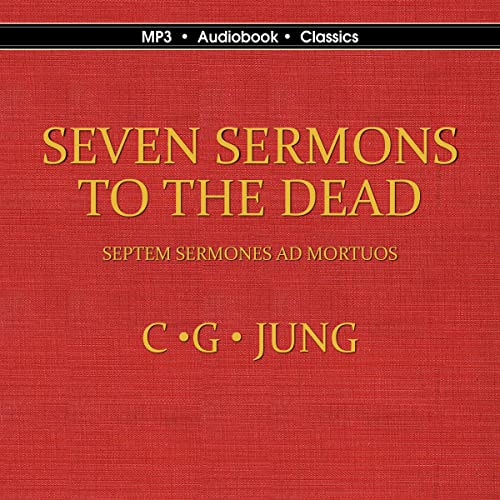 Seven Sermons to the Dead

By: Carl Gustav Jung
Narrated by: Douglas Harvey
Try for £0.00

In late 1913, Carl Jung set out on an exploration of his psyche, a quest he called his "confrontation with the unconscious". In doing so, he would enter an imaginative state of consciousness and experience visions, a process that continued with varying intensity for the next 10 years. He recorded his visions in six black-covered journals that he referred to as the “Black Books”, which provided a chronological record of his visions and dialogues with his soul.

Along the way, he used this material to begin drafting the manuscript of his legendary Red Book, a red leather-bound illustrated volume that was the formal document of this journey and which he kept private during his lifetime. He maintained that the visions recorded in the Red Book represented the nucleus of all his later work.

The Seven Sermons to the Dead, or "Septem Sermones ad Mortuos", is the only portion of the Red Book manuscript that Jung shared during his lifetime. He had the "Septem Sermones" privately printed as a small book in 1916 and occasionally gave copies to friends and students; it was never published and was only available as a gift from Jung himself. Jung’s heirs denied access to the Red Book after his death in 1961 until 2009, when it finally published, and it was discovered that the "Septem Sermones" was the closing section of the book.

This context, combined with the tone and content, led one Jungian scholar to consider them as the "summary revelation of the Red Book". The "Sermones ad Mortuos" was included as an appendix to Jung's autobiographical memoir Memories, Dreams, Reflections when it was published in 1962.

What listeners say about Seven Sermons to the Dead

This set of sermons, which represent to me Carl Gustav Jung's deeply learned openness to Divine revelation Holy Mysteries, brings to the listener the burden and consolation of the Mystery that Jung received and spent the rest of his earthly life and career unpacking and interpreting in his work to bridge the mysteries of past and present, good and evil, humanity and divinity, psychology and pneumatology, and to find ways to keep the door of human soul and divine and symbolical mystery of life, death and cosmos open and accessible in a world of increasingly technocratic, materialistic, autocratic, totalitarian, and mechanized ways of living and thinking that are overcome by Jung's groundwork of placing spirit and mystery at the core of his psychological science and method of treatment.

This is a special book and one that Carl Jung regretted sharing. Great audio version.

I could listen to this daily without a problem. So deep. Perhaps this is the icing to the Red Book