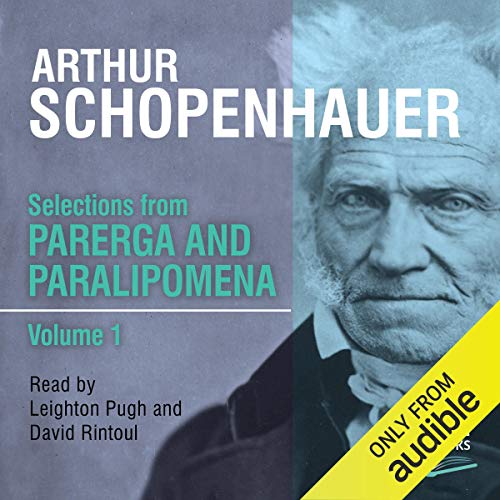 Selections from Parerga and Paralipomena Volume 1

By: Arthur Schopenhauer
Narrated by: Leighton Pugh,David Rintoul
Try for £0.00

The two sizeable volumes of Parerga and Paralipomena hold a special place in the output of Arthur Schopenhauer.

Parerga means 'supplementary to a main work', and Paralipomena suggests a further supplement, but these two books were anything but a casual addition to his major opus, The World as Will and Idea. For a start, it was the publication of Parerga and Paralipomena in 1851 which brought Schopenhauer to the attention of the general public, decades after The World as Will and Idea first appeared.

Suddenly, people sat up and took notice, and Schopenhauer was established as a major figure in 19th-century German - and world - philosophy, a reputation he has never lost. This recording of the major part of volume 1 contains, arguably, the most important essays.

From volume 1, Leighton Pugh reads 'Sketch of a History of the Doctrine of the Ideal and the Real', 'Fragments for the History of Philosophy' and 'Transcendent Speculation on Apparent Design in the Fate of the Individual'.

David Rintoul then takes over to read the most well-known section of volume 1, 'Aphorisms on the Wisdom of Life' and 'Counsels and Maxims'.

In general it could be said that the content of volume 1 of Parerga and Paralipomena presents ideas which are supplementary to the main thrust of Schopenhauer’s life work, whereas volume 2 sees him responding, more briefly but with customary clarity, to a great variety of topics. The translations in this recording of volume 1 are by Ernest Belfort Bax, David Irvine and T. Bailey Saunders.

What listeners say about Selections from Parerga and Paralipomena Volume 1

Knowledge for the patient

For me, Schopenhauer is one of the greatest teachers on life and wisdom. But you must be patient and thoughtful, wanting calmness of mind amd health, uncommonly seen on this generation.