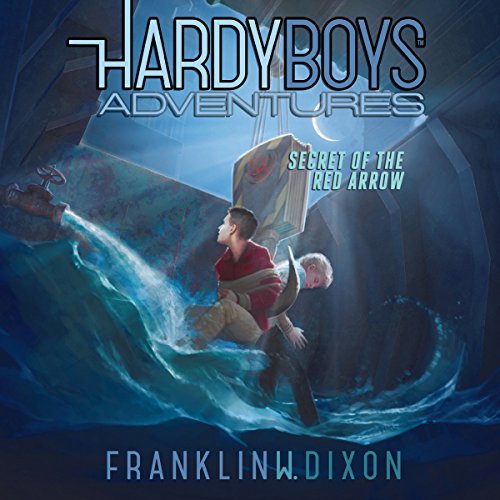 Secret of the Red Arrow

By: Franklin W. Dixon
Narrated by: Tim Gregory
Try for £0.00

Something is not right in Bayport. After a series of unfortunate (yet harmless) pranks, it looks like Frank and Joe have caught their suspect surprisingly early. Their classmate, Seth Diller, has taken his love of filmmaking a bit too far. But shortly after Frank and Joe confront Seth, there are fresh outbreaks of Seth-like pranks. Except these aren't as harmless. After a bit of investigating, the Hardy Boys uncover evidence of the Red Arrow - a group that will stop at nothing to bring chaos and crime to Bayport's peaceful existence.

In the most dangerous case they have ever taken on, it's up to Frank and Joe to find the Red Arrow - before it finds them first.

What listeners say about Secret of the Red Arrow

Where are the original Hardy Boys

Who suggested it would be a good idea to update the Hardy Boys with iPhones and guns? Do you really think I would like to play this rubbish to my son?

Not the same as the originals

I am sad to say that these new books, although very well read, are really not the same as the original Hardy Boys books. I found this story quite weak and after listening to several now, they all follow the same pattern. It’s much more egressive and I find the setting of modern day Bayport just doesn’t sit well with me. I am kicking myself for not downloading more of the originals. These may be good for people who have not read/heard the oldies so perhaps I have been spoilt 😊

Classic series ruined by being modernised

Read the Hardy Boys as a child and thought this was a faithful adaptation. It isn't, references to computer screens and online banking. Clearly updated for a modern audience. Completely unnecessary.

we love the hardy boys

this was a very good book the story was great i loved it : ) its lots better the the original

Not the Hardy Boys you remember

Missing ALL of those classic Hardy Boy characteristics..... No jalopies, no gang of friends, and very little cleverness

the mystery is ok. I like the original that I grew up reading better

It was painful to sit through the reading of this book. i grew up with the first Hardy Boy books then with the "case files" edition. I did not enjoy this author's version of the famous Hardy boys.

I’m just amazed that Franklin W Dixon is still writing. He is over 100 years old,if he is still alive. Oops there have been many Franklin W Dixon. He/she is not a real person. I enjoyed the original series the first book is OK, but is obviously and attempt to retread an old tire. This technique is worked well in the movie industry. Why shouldn’t audible/Amazon do the same thing. Does anyone feel that using the name Franklin W Dixon is a bit deceptive? I do!

It's hard to imagine that this was written by the same author as the original series. My son and I have been listening to the first 5 books of the original series and they have all the charm of 1950's America in a small town. The modern references in this book were jarring and The made up story about how the Hardy Boys cant practice "sleuthing" anymore seems contrived and unlikely. Too many people were suing them? Really. And what happened to their dad? He is writing books now and retired as well?

Would you recommend Secret of the Red Arrow to your friends? Why or why not?

Was Secret of the Red Arrow worth the listening time?

Listen, I love this author but it really seems he should have quit while he was ahead. I don't want to hear about Jo watching his phone too much or uploading you-Tube videos. The original serious was great, just leave the Hardy Boys In Pleasantville!

This book was interesting and funny. The Hardy boys do not stop, mysteries need solving.

Not the old books

I searched for "Hardy Boys book 1" and selected the book that said book 1. I was disappointed when it became obvious this was not the actual first book but the first book of a new series. We still listened and enjoyed it but I wish I had paid more attention to the copyright date on the book I selected before using a credit on it.

Not a fan of this series

I find I am not a fan of the series that is written in the first person. I like the 1959 and 1929 series, but not this new stuff. The whole thing about not being allowed to investigate seems pretty hokey, too. The update of technology is reasonable, but there was no need to change all the characters and personalities. I didn't really like the dramatization in this recording, either. The voice was okay for the adult characters but not for Frank and Joe.