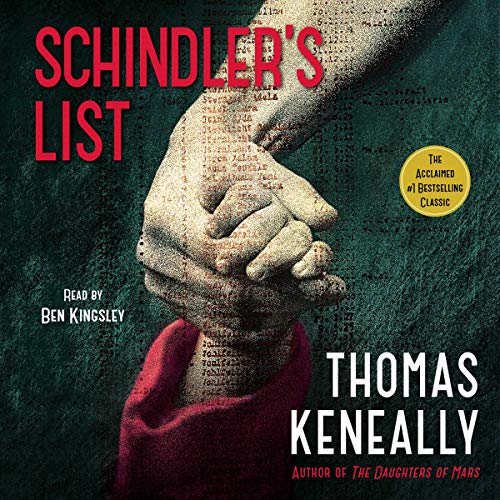 By: Thomas Keneally
Narrated by: Ben Kingsley
Try for £0.00

During the Holocaust at the German concentration camp near Plaszow, thousands of Jews lost their lives at the hands of the Nazis. More than a thousand others were spared thanks to a womanizing, heavy-drinking, German-Catholic industrialist and Nazi Party member named Oskar Schindler. One of the most remarkable narratives of the Holocaust, Schindler's List masterfully recreates the daring exploits of Schindler, who used his enormous fortune to build a factory near the concentration camp and his influence to save the lives of more than 1,300 Jews. It is an absorbing, suspenseful, and moving account of Schindler's legacy of life.

Excellent, good story telling by the narrator, but spoilt by being abridged.could not find unabridged version.

I really enjoyed this - it's ideal for anyone wanting to read this brilliant book but like me being nervous about how upsetting it might be. It's an important book that we should all read really, even if an abridged version.

Wonderful in every way. It came to and end very quickly. I wish it was unabridged.

A book that should be read in every school

Truly awful events, awful. The shameful thing is that the World has never learned from these events. Nationalism in its purest evil lead to this yet since WW2 so many other States have gone down the same awful route. Humans love war and having absolute power over others it seems. we never learn.

I've read this book many a time but to have it read to me was something special.It never gets any less interesting with any read and is a story of beauty from tragic loss.

The more audiobooks I listen to the more I realise the quality of the reader is key. Ben Kingsley is ace - he does the voices for each character and everything!!

What a book.
what a story
what a man
what a hero.
I salute you.
great book a must read.

If you could sum up Schindler's List in three words, what would they be?

His voice captures you

Have met Schindler survivors and visited his grave, so was looking forward to listening to the book, but I should have known that I wouldn't get involved in an abridged book. Too much was left out. Will have to wait for an complete version of Schindler's Ark or have the time to read the book.

Having read the actual book, the abridged version seems to have left out a considerable amount of story lines that were needed in my opinion to be left in.

Would you be willing to try another book from Thomas Keneally? Why or why not?

Yes, as long as it was not an abridged reading

Which character – as performed by Ben Kingsley – was your favorite?

None really stand out above any other

It was Schindler's List which is a fantastic story in itself.

This would have been a great listen unabridged

... if unabridged! Kingsly blew this out of the water! Goose bumps, tears, pounding heart- he made me feel it.

I've not seen the movie so this was my first exposure to the story of Oscar Schindler and the Jews of Krakow. The story's slow buildup is what sticks in my mind. No one in Krakow new, of course, what was going to happen. Each new regulation (Jews can't have more than xxx marks in their bank account) was greeted with a kind of resignation -- maybe this one will be the last. The tale is told with a neutral tone that only increases the feelings in the reader of foreboding, shock, and sadness. This book, more than any other, reveals the beurocratic nature of the holocaust, and how it used the existing government and industrial system, of ordinay people, to follow an agenda of madness.

The Unabridged Doesnt Cut It!

The shortened book doesn't flesh out this amazing story. It's a shadow of the entire book.

When confronted with danger, most people will shy away but Schindler did not and not only did he not shy away but he risked everything to save as many people as he could during the Holocaust and no matter how many times I hear this story I can't help but get goosebumps and chills. He was such a great hero and his deeds will forever be remembered by the entire families for every one of the thousands of people he saved. Making this book that much better, Kingsley does a great job as the narrator. It's hard to say this, but this book could actually be better than the classic movie starring Liam Neeson, who was nominated for an Oscar for his outstanding portrayal of the late great Oskar Schindler. Also, I really enjoyed the ending of this book and how Schindler made out following WW!!.Found that to be very interesting and something that I definitely did not know beforehand.

Two thumbs up and highly recommended!!

We are all capable of cruelty and compassion

A great companion to the movie

Fills in the blanks from Spielberg's film and provides an excellent read.

This is one of my favorite movies of all times. I'm too old and my eyesight is too bad to read the book now so I was very happy to find this audiobook. The story is great. Schindler was a wonderful man.

This was a awesome story. however there were so many names I could not follow the story as well as I wished I could have.