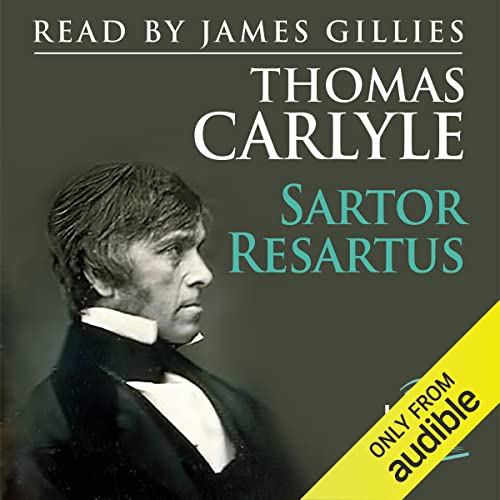 By: Thomas Carlyle
Narrated by: James Gillies
Try for £0.00

Sartor Resartus is one of the most unusual, even quirky, British novels to emerge from the first half of the 19th century. Published in 1836, its varied heritage reflects the earlier eccentricities of Sterne and Swift, curiously mixed with influences from Goethe.

Its subject matter is strange: it concerns a book called Clothes: Their Origin and Influence by one Diogenes Teufelsdröckh, a German philosopher. And though Thomas Carlyle (1795-1881) became a household name in his lifetime, especially for his essays, and his work as an historian and philosopher, his comic novel Sartor Resartus would prove to have a lasting effect on contemporary writers. American figures in particular - Emerson, Dickinson, Melville and Twain among them - acknowledged its influence.

In addition, Jorge Luis Borges was among the 20th-century writers to salute the work, which he encountered aged 17. Borges reflects: 'I read Sartor Resartus, and I can recall many of its pages; I know them by heart.' Sartor Resartus (which means 'The Tailor Re-tailored') chronicles the struggles of an unnamed editor attempting to produce an English-language edition of a publication, which, according to the man who has sent it to him, is 'a work of philosophy which has taken all Europe by storm'.

This is the book on clothes by Teufelsdröckh, with whom the editor was briefly acquainted on his travels. However, the more vigorously the editor sets himself to his task, the more thankless and perhaps impossible it proves. In frustration, he shares fragments of the translated work with his readers, in the search for some collective insight. When a biography of the author arrives, promising to bring some context to the work, the editor finds himself even further at a loss. His trust in Teufelsdröckh begins to unravel, and he becomes suspicious that nothing about this book, not even its author, is as it appears to be. Is it a work of genius? A palimpsest with a secret hidden in its depths? Or is the editor in receipt of something completely different and wholly unexpected? Sartor Resartus may now largely exist in the shadows of On Heroes, Hero-Worship, and the Heroic in History, and his account of the French Revolution, but this early novel represents an interesting phase in Carlyle’s literary output.

What listeners say about Sartor Resartus