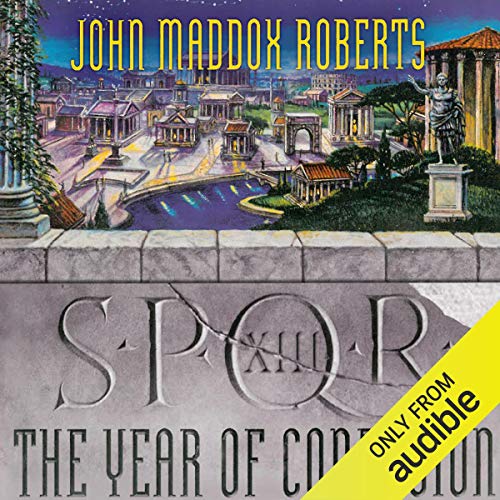 SPQR XIII: The Year of Confusion

Caius Julius Caesar, now Dictator of Rome, has decided to revise the Roman calendar, which has become out of sync with the seasons. As if this weren’t already an unpopular move, Caesar has brought in astronomers and astrologers from abroad, including Egyptians, Greeks, Indians, and Persians. Decius is appointed to oversee this project, which he knows rankles the Roman public: "To be told by a pack of Chaldeans and Egyptians how to conduct their duties towards the gods was intolerable." Not long after the new calendar project begins, two of the foreigners are murdered.

Decius begins his investigations and, as the body count increases, it seems that an Indian fortune-teller popular with patrician Roman ladies is also involved.

This latest in the acclaimed series is sure to please historical mystery fans.

"Readers looking for a crafty and entertaining journey to the past won’t be disappointed." ( Publishers Weekly on SPQR XI: Under Vesuvius)

What listeners say about SPQR XIII: The Year of Confusion

"Always a good thing to keep up your sword work"

I never wanted it to stop.

The last in this excellent series - great investigative stories mixed into the vivid reconstruction of ancient Rome and Roman society, daily life and ideas. The eBooks are not available on Amazon.co.UK but the narration of John Lee makes listening to the often amusing tales a real delight. This one is no exception, set in Rome itself as the calendar is updated and Caesar is gathering detractors as the Republic totters to it's end.
I am going to miss the imaginative memoires of Decius Caecillius Metellus the Younger

Really enjoyed the series of SPQR! Not just the twists and turns of the story line, but historical background & the dry humour of the characters. Really hope there are more from the author in this series.

please sir, i want some more

Would you listen to SPQR XIII: The Year of Confusion again? Why?

actually, I listen to all of them quite frequently. Along with S Holmes & N Wolf, they've gotten to be old friends.

it's a bit long for one sitting, but would willingly put the disks into my player until I get where I'm going.

I'm hoping that there will be more, I've found a short story in an anthology and wishing that there are more of them and eventually they will find their way into a collection that I will be able to add to my library.

An immensely enjoyable & satisfying series! Once I started Book #1, I couldn’t put them down. Tore through series in less then a week. Very Highly Recommended!

This guy is fucking brilliant..
Fantastic series ..
Very intelligently written and entertaining.
I have to admit I only started this series because of John Lee. Well that was my introduction and I LOVE it.
Great Job on this series.. Really!!

I hope this not the end of the journey of Decius.

The skillful blend Of John Lee and John Roberts has made this entire series a resounding success. All hail Decius Metellus!

a great end to a very fun ride

This is actually review for the entire series, I read all books in the series back to back because they were just that good. Decius is smart funny loves to eat and drink and is very tongue and cheek. The Mysteries in this series always fun and the great way to learn about ancient Rome. These books are a great way to learn about the latter years of the Roman Republic which I have always found to be a bit confusing. You get to see these characters that most of us have read about in history classes like Caesar and Pompey and Cicero as people not just dried names on a page. You also get to see some of their flaws as well as their achievements. This is one of the best series I've read in a very long time and it comes highly recommended.

I normally hate books that change narrators part way through series but for some reason I gave this series a pass i chalk that up to exceptional writing because regardless of narrator the humor and sarcasm which I love comes through loud and clear.

As with the rest of the series. Ready for Spqr XIV. Makes you feel like you're there.

So sad it's the last book in the series

This is a great series. I wish there were more books in it. In this book we have Caesar and Cleopatra and Marc Anthony as well as our old favorites and a lot of other interesting characters