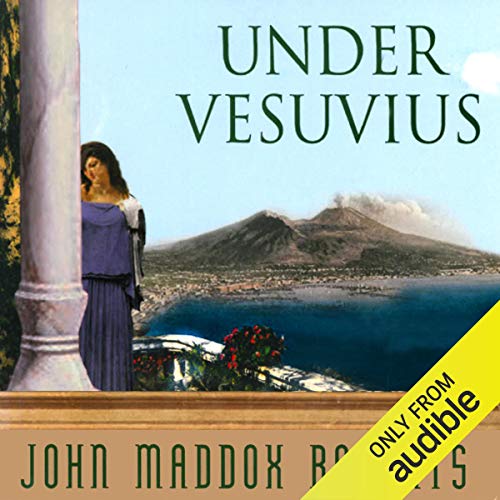 Things are going well for Decius Caecilius Metellus. He is Praetor Peregrinus, which means he has to judge a case or two, but those cases are outside of the city. His cases will be those dealing with foreigners, and all of Italy is his province. His first stop is Campania, "Italy’s most popular resort district". Decius and his wife, Julia, are happy for a change of scenery. But the good times end when, in a town near Vesuvius, a priest’s daughter is murdered. Decius must find her killer and keep the mob off a young boy who everyone blames but he believes to be innocent.

With his SPQR novels, John Maddox Roberts has written a satisfying and entertaining historical mystery series. The stakes just keep getting higher in this latest atmospheric puzzle.

What listeners say about SPQR XI: Under Vesuvius

A pleasant duty round as Praetor in Campania erupts into violence when a young girl is found murdered and her admirer is accused of the killing. But Decius Caecilius Metellus the younger believes him innocent and hopes to save the youth from the death sentence he himself will otherwise have to proclaim. As possible witnesses also start to disappear or die, finding the needed proof becomes almost impossible. Twists and turns set in a debauched society even by Roman standards all told with deliciously dry humour and, as usual, nicely narrated by John Lee. Delicious.

I'll listen to anything by this guy. I've heard the series through once already, this is my second time.

His best work yet

I've been listening to all of the SPQR novels over the last couple of months and I must say I haven't enjoyed one more than what I just listened to, and I rate this series extremely highly. While I enjoy the power politics of the other books immensely this one was an amazing deviation. Never has human emotion been such a factor in one of these plots.
The characterizations are impeccable as always, his ability to portray the Romans way of thinking across a spectrum of personalities and just how peculiar Decius is has always been one of my favorite things about this series.
That's sufficient praise heaped onto this book, stop reading the review and buy it.

Outstanding story, and my favorite narrator!

Airways terrific stories and I can't say enough about John Lee. He's among the very best in the audio book business.

Rome unlike you would imagine

He is a great narrator, I will be looking to see if he is narrating any other books!

Explains life in Rome, as you would imagine it might be. Slavery is common, everybody seems to own a few. Historical characters are involved and you get a feeling Rome was not such a good place even for the nobles.

As Good as the Rest

Great addition to the SPQR series. If you liked the others, you will like this one as well. If you didn't like the others, then it is unlikely that you would have read this far in the series anyway!!

I love the SPQR Series. I have been to campania so this was the first in the series I read. I went back to the start then. I especially love the ones narrated by John Lee.