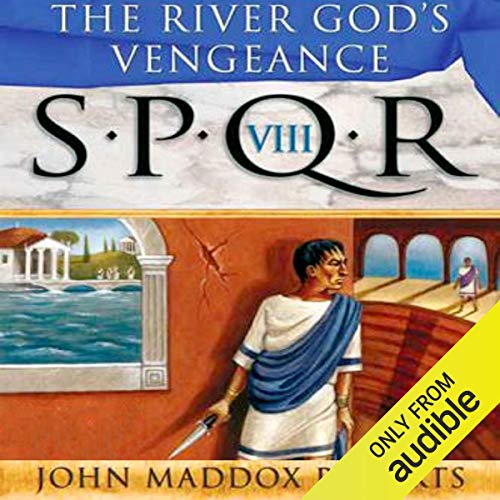 Ancient Rome, in this accurate and evocative series, is just as politics driven as any major American city - possibly even more. Decius Caecilius Metellus has, through a series of rather wild adventure, and in the act of tracking down killers and other reprobates, barely escaped annhilation several times. Now, newly elected to the office of aedile, the lowest rung on the ladder of Roman authority, he must smoke out corruption and conspiracy that threaten to destroy all of Rome.

What listeners say about SPQR VIII: The River God's Vengeance

Another delicious Roman romp as our hero, Decius, seeks to uncover shortcutting in the building industry as the water level rises and theatens to seriously flood the city.
Written with panache and humour, full of fascinating detail and robustly read by John Lee, this is a book to thoroughly enjoy.

Sewers and Theaters and Father Tiber

This is another hilarious mystery for Decius. Now he an aedile who is responsible for the upkeep of the drains, the Cloaca Maxima, and the building code. Like all aedile he is expected to stage games for the public -- and these cannot be done on the cheap. You need gladiators, wild beasts, plays and mimes.

It starts off with the collapse of an Insula (tenement) in which our aedile discovers violations of the building code when he inspects the collapse. Also it also seems that some killed in the collapse were actually murdered. While trying to sort out the murder, Decius is also busy preparing for his "games" -- and he goes to see a rehearsal of a play to be staged at the games. The theater seems a little wobbly and might collapse.

To add to this it is a season of heavy rain and the drains, which have not been cleaned out in years, overflow flooding the city. The wobbly theater collapses as Decius and his sidekick Hermes have a narrow escape during the collapse which by chance also kills the murderer.

The book is great fun and should not be missed. I am so glad Audible is bringing this series to audio books. John Lee is an excellent narrator

This is not the very best of the series only because the ending is a little more contrived then usual but really who cares. Learned much about Ancient Rome as usual.

love how it follows history. John Lee's performance is incredible as always. engaging to the end

History of Rome in an entertaining story

The author tell the story of Rome and its politics while telling a murder mystery. Historical figures are scattered throughout and in a very believable way.
The narrator does a great job!

This book does not disappoint, and neither does the performance. John Lee kills it as always.

Entertaining and Educational as Usual

Similar to the rest of the series. Enjoyable listen. I will continue the series to the end.

lots of the shenanigans JMR fans love with just enough integral politics and historical reference to enrich the guilty pleasure of the read. Give me more.