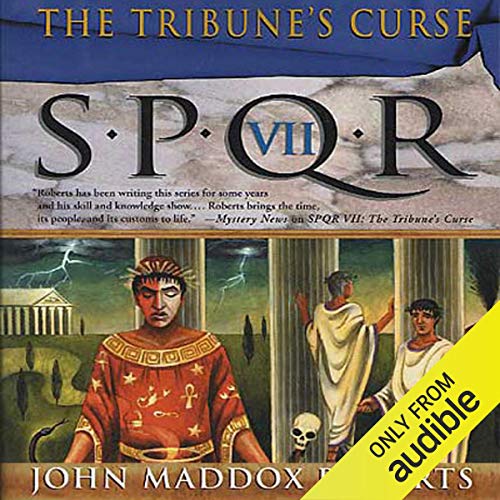 I was happier than any mere mortal has a right to be and I should have known better. The entire body of received mythology and every last Greek tragedy ever written have made one inescapable truth utterly clear: If you are supremely happy, the gods have it in for you. They don't like for mortals to be happy, and they will make you pay.

In his extensive series featuring the detecting feats of Decius Caecilius Metellus the younger, set in the Rome of 70 BC, Roberts achieves a very believable modern feeling with his well-researched description of the stories' background. This seventh episode, however, combines a familiar view of the demands office-seeking makes on a candidate with a situation that is impossibly bizarre to us today. An entire city, versed in literature, music, and the other arts, ruled democratically, for its time, is thrown into panic by an enraged man's curse.

The Consul Crassus, the wealthiest man in Rome, frustrated by the Senate's vote against his leading Rome in a war against Parthia, plans to march his private army to invade the country himself. Almost all of Rome turns out to watch him carry out his threat and lead his troops out of the city. But before he can, a powerful tribune called Ateius leaps to the top of the city's gate and invokes all the gods to put a curse on Crassus and his army. Rome is terrified. Ateius has called down a forbidden curse - the worst and most frightening blasphemy ever perpetrated. It seriously threatens the entire populace, and drastic steps to propitiate the gods must be taken immediately. Worse even, someone kills Ateius - perhaps in the vain hope that this will lighten the curse? It will not.

After joining the other men of the city in a daylong cleansing ritual that left every able-bodied male citizen, Decius included, in a state of half-collapse, Decius learns that he has been chosen to uncover the person responsible for the murder. The culprit must be found in order to complete the cleansing, and there is no one better equipped to do that than Decius. Roberts skillfully blends the playboy and the serious sleuth in Decius just as he combines what we see as contradictions in the Rome of 80 BC. He spices his story with humor and suspense, with characters charming and wise and foolish and very much like we are today. And he presents listeners with a look into another world that has them eagerly awaiting more visits.

What listeners say about SPQR VII: The Tribune's Curse

"The best parties ever seen in Rome"

We are back in Rome again with elections coming up and our main protagonist, Decius Caecilius Metellus the younger, is one of the candidates, having left Julius Caesar's troops warring in Gaul. But, as usual, things do not go smoothly when Rome itself falls under a virulent curse directed at the richest man of that fair city as he leaves to embark on his own war in search of glory and greater wealth. When the senator who performed the curse is, himself, found apparently murdered, it falls to our luckless and flawed hero to investigate.

Another excellent, puzzling mystery to unwind without the help of modern forensics. The writing is very visual as we are led through the streets of Rome, meeting sometimes strange and exotic characters. The dialogue is filled with wry humour and fascinating titbits of Roman life and culture are revealed. John Lee does a good narration as he becomes the voice of Decius.
It's fun, it is exciting and it even teaches without preaching. Highly recommended.

Not as Good as Other in the Series

I did not care for this story about a tribune who curses Crassus and Rome and then is murdered as I did most of the earlier books. Decius must first find the body, and then the murderer as he involves himself in current witchcraft cults emerging in the city.

The Tribune is seen being murdered on top of the wall as he curses Crassus and Rome. A search is made for his body, only to eventually find out he is not dead at all. Somehow the book did not come alive for me as others in the series did.

I think the other books in the series are far better than this one -- althought I like the entire series this was not one of my favorite books.

Like all the books in the series, it is quite short and moves at a fast pace.The books are never boring, and if you like Ancient Roman Mysteries set in the period of the Republic this is a great series.

John Lee does a good job of the voice and easily bring the books and it characters alive. I recommend that you start the series from the beginning although that is not necessary since every book is a nice stand-alone but there is a continuity that reading the series from the beginning bring especially as the subtext is that of Decius climbing the Cursus Honorum and what trouble he gets into in each new political job.

My favorite of the series

The Tribune's Curse is my favorite story in the SPQR series. The audio version is well produced, captivating and just a great listen.

This series is wonderfully done. The stories are entertaining, the performance is perfect and relatable, and what I didn’t realize prior to some other reads is a lot of the happenings mentioned herein are based on true events. I think that makes the series that much more valuable. I had no idea I was being taught history while laughing and waiting to find out how the puzzle pieces fit together. Well done John Maddox Roberts and John Lee!

I love this entire series. Anyone who enjoys stories about--the beginning of the end of--the Roman Republic will love it too. The author packs a ton of fascinating historical facts into his stories, while his fictional protagonist/ first person narrator, a Roman patrician and, in modern terms, private detective, is totally lovable and beliveable. I particularly enjoy his interactions with (and remarks about) his checky slave, Hermes, his wife, Julia (who snores aristocratically!) and his curmudgeonly, old fashioned father. Above all, these stories are both interesting and FUN, and the reader, John Lee, brilliantly highlights the ongoing irony and seamlessly weaves in the differing voices of the various characters without going overboard. I have also enjoyed Steven Saylor's series about Gordianus the Finder for many years, but John Maddox Robrts, just as knowledgable about ancient Rome, has gone one better than Saylor, by including humor. Highly Recommended!

One of the best in an enjoyable series!

A cracking good mix of real Roman history and an engaging mystery with characters who continue to grow on the reader as the series progresses. John Lee is a fine and entertaining narrator, as always!

all the books in this series are fantastic and this is one of the better ones which is saying quite a bit. especially love the ending

These stories are a great way to get a glimpse into different aspects of life, culture, and the politics of Ancient Rome.