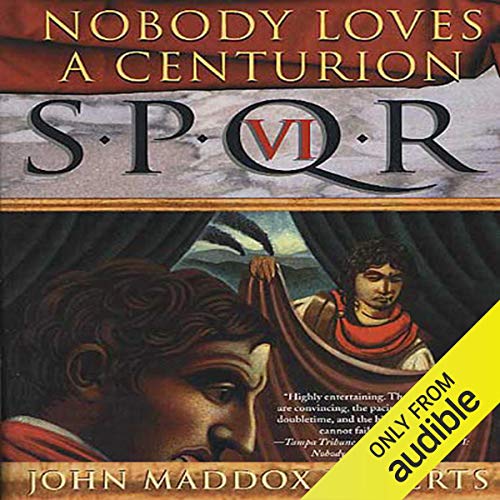 SPQR VI: Nobody Loves a Centurion

Julius Caesar, as we know, arrived in Gaul (now France) and announced "I Came, I Saw, I Conquered." But when Decius Metellus arrives from Rome, not seeking military glory but rather avoiding an enemy currently in power, he finds that although the general came and saw, so far, at least, he has far from conquered. The campaign seems at a standstill.

Decius' arrival disappoints the great Caesar as well. He has been waiting for promised reinforcements from Rome, an influx of soldiers to restart his invasion. Instead he is presented with one young man ridiculously decked out in military parade finery and short on military skills, accompanied not by eager troops but by one callow and reluctant slave, the feckless Hermes.

It soon develops, however, that Decius' arrival was fortuitous. When Vinius, the army's cruelest centurion (so-called because he commands 100 soldiers), is found murdered, Caesar remembers that his new recruit has successfully come up with the culprit in a number of recent crimes. Murder is bad for morale, particularly since it seems quite clear that the murderer was one of Caesar's men. Caesar orders Decius to find the killer - and quickly.

Although evidence points to the son of one of Decius' clients - a youth who was the particular target of the centurion's brutality - Decius racks his brain to find a way to save him from the sentence of death. The investigation leads Decius to two German slaves of the dead man - a dwarfish old man and a beautiful woman. They are puzzling; the man is arrogant, the woman haughty - very unlike slaves. There are unanswered questions. It soon becomes clear to Decius that only by finding and punishing the real murderer will it be possible to quiet the rising dissatisfaction with Caesar's unorthodox method of warfare and forestall a mutiny against the mighty Caesar's authority and aims.

What listeners say about SPQR VI: Nobody Loves a Centurion

I love these books.

I wish there was more of them. 13 books aren't enough.

The narrator is perfect. You won't be disappointed.

Excellent murder mystery set in Caesar's camp amongst the troops; well narrated by John Lee. Historical setting with Romans, Gauls and Germans,, thrills and humour and no graphic sex - a winner in every way.

I have always enjoyed the SQPR stories more when Decius gets out of ROME, and this recounting of his adventures in Gaul particularly shines. A good part of the SPQR stories comprises the historical descriptions; taking the reader into the world and mindset of ancient Romans. With this story Mr Roberts gives us some experience of life in the Roman legions. That adds a lot more interest than another series of descriptions about the minutiae of life in Rome.

Decius's adventure with Caesar's legion unfolds at a satisfying pace. It is well dosed with humour and interesting characters. Decius is clearly a 'modern' man that we can identify with, and is also clearly a man out of his time. His contemporaries mostly think him mad, but I find him totally sane.

I do so enjoy historical novels

If you love great mystery and story line as well as well researched history of the Roman Empire this series is great. I suggest you start with book on "The Kings Gambit" this way you follow our hero DECIUS from the start. He has had some really bad luck and you will see that Romans make some of our politicians look moral, even noble.

What was one of the most memorable moments of SPQR VI: Nobody Loves a Centurion?

In all of these books it's the last chapter and if I tell you it gives away the main plot, you'll just have to listen. Just when you think you know what is going on there is always a twist. Especially for Decius.

What does John Lee bring to the story that you wouldn’t experience if you just read the book?

John Lee is one of my favorite narrators, and he never disappoints. The first two book started with another of my favorites Simon Vance, and to tell the truth both narrators are great. You must remember that the story is being told from the point of view Decius is an older man telling stories of his different workings within the Powers that be in the Roman Empire.

It's very hard not to want to do that with all the books in the series because there is always so much going on you want to know what happens next.

This is a great series for some reason books 9 and 10 won't be available but 11,12, & 13 will be in April. I do hope that the other two will be coming soon I hate to read series out of order.

but everybody loves a Senator!

Decius is so droll, so honest, and so damn much fun. I love the way he finally decides the only way to solve the mystery is to do something so outrageous it will either provide the solution or kill him. I adore the narrator, John Lee. He has just enough attitude without being pompous about it. I'm trying to limit myself to one book every other month so I don't go through them so quickly but it is really hard. No complaints at all from me!!

Another winner - this time on location with Caesar

Here we find Decius Metellus the Younger on location with Caesar in Gaul when all of sudden a Centurion, the Primius Pilus, is found murdered. Caesar calls on our hero to solve the case -- which he ultimately does despite being kidnapped by Ariovistus. These are short books but lots of fun. They are well researched and capture the period. John Lee does an excellent job of narration.

If you like mysteries set in the ancient world - this is a series not to be missed. All the books are on Audible so get started with the First book and get some Roman History along with the mystery.

A Centurion you love to hate.

You really don't want to be in the army. Great story told with insight. Gives you the very feel of the times and why hearing about it is so much better than having to live it. True then as it is true today. Truly +++++.

this book has the most interesting story and most historical detail of the first 6 books. liked it better with less relationship angst and more story.

Set in Ancient Rome in the turning girl Republic to Empire, the SPQR series is delightful and a bit kitschy. It’s a bit of guilty pleasure, but I love Decius’s pursuit of the truth among Julius Caesar, Pompey, Crassus and the people and senate of Rome. I devour these books.

Would you consider the audio edition of SPQR VI: Nobody Loves a Centurion to be better than the print version?

Have not read print.

The plot line. Great surprise ending. Don't peek! That's what's good about audiobooks. It makes it a lot harder to peek.
Also, author did a great job bringing the ancient-Roman-times setting to life.

Too long to do so, but I was eager to get back to it. I drive to work with Audibles.

Made me want to read more by this author. But I also have a weakness for stories about ancient Rome.