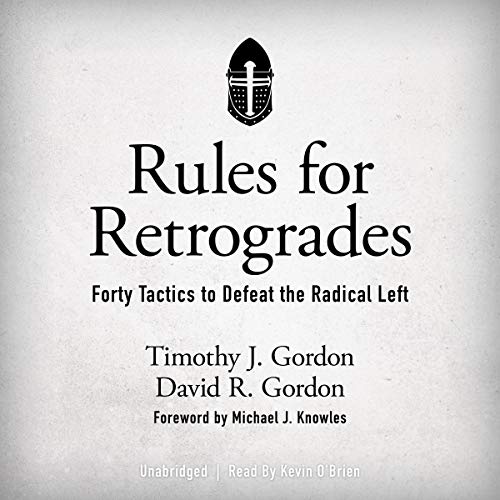 Rules for Retrogrades: Forty Tactics to Defeat the Radical Left

What is a retrograde?

A retrograde calculates, night and day, how to return the world to:

In the words of Shakespeare, a retrograde is one of God’s spies.

The retrograde has the unique capacity for understanding the stark chasm between the degenerate, socialist-infiltrated world of decay on one side and the well-meaning, good-hearted, but clueless Christian world on the other.

In a time of such profound decay, being one of God’s spies is a last resort and a pure necessity: It involves not “deep cover”, - i.e., acting like the enemy - but rather “half cover”: Acting as a “contra” in the secular arena, a crypto-Christian counterinsurgent willing to fight like a Navy Seal and to think like a counterintel officer.

Retrogrades...to the streets: Our aim is to reverse the deliberate, deuced machinations of “radicals” like Saul Alinsky who, by penning the rulebook of radicalism, threw down a challenge that has, until now, gone unanswered. Rules for Retrogrades is the audiobook men of good will need to win the culture war! Here is a sampling from the call to action found within these sections:

What listeners say about Rules for Retrogrades: Forty Tactics to Defeat the Radical Left

The book that could have been...

...and someday may be. I suspect after a few years maturity and reflection, the authors will look back and wish they had written this differently, or even better, give it a second go. I am definitely ambivalent about this book.


POSITIVE First, I applaud the Gordon brothers for their fire-in-the-belly commitment to take the fight to the enemy. I share their Catholic faith, their frustration and their social critique (at least the ones in this book). I am greatly encouraged to see younger Catholics so zealous for their faith and for calling out the abominations of our day. I hope they are the tip of the iceberg, and that they have a following they are motivating to action. This gives me hope for the future of the Church in America, and for our culture.


Second, even though I found this book wanting in significant ways, I encourage you to read it (or listen to it.) It is short enough that its shortcomings are tolerable for the few hours it will take, and you will likely walk away with a little less film over your eyes, as I did.


NEGATIVE The book should simply have been an essay or article in an online Catholic magazine, in something like "The Catholic Gentleman." Beyond the bullet points of the "rules," it reads like the rant of a couple of fired-up college students who all too often digress into cliches and sweeping ad hominems. The only words to describe it I can think of are shallow and intellectually immature.


Perhaps this style appeals to a less informed, 20-something reader, and perhaps that was their target audience. I, however, was disappointed and would have benefitted from a more seasoned understanding and presentation.


I suspect the authors would respond that those who are seasoned are not writing these kinds of books, have dropped the ball, and so it falls on them to do their best. Fair enough, and again, I am in their corner as far as that goes and am fighting alongside them.


A final comment on the audio narrator. I have enjoyed Kevin O'Brien's narrations in the past, but those have always been fictional works where he is so good at using voice to bring out the characters in the story. Mr. O'Brien did a fine job in his narration of the prose sections. However, it was simply a bad decision (on whoever's part) to use different voices for the many quotations embedded in the book. That was very distracting and at times just silly.

As a baby boomer I had to accept the uncomfortable truth that I fit the description of our generation and for my part in it I sincerely apologize. There is a latent Retrograde lurking within me and I pray that God will send the Holy Spirit to repair my broken fatherhood so that at least one of the eight young men that call me dad will be guided to join the cause.

Every Catholic needs this book!!!

A call to Action for all

Great teaching on how to deal with radicals when they are not willing to hear truth.

He speaks the truth in a day of lies in culture and media, his book lifts this veil.

A Must Read for Conservatives

The only remaining path to righteousness, safety, and a healthy America is for Christian conservatives to start standing up for what they believe. We’ve shaken hands with the devil due to either a lack of interest in activism, cowardice, or attempts to gain cheap power that is never used to fight leftist radicals. Now Christian conservatives have no choice but to stand up and take back cultural territory. This is a must read and a must do.

Prescient insights to the 2020 Presidential campaign and election. Already sent a copies out to family and friends.