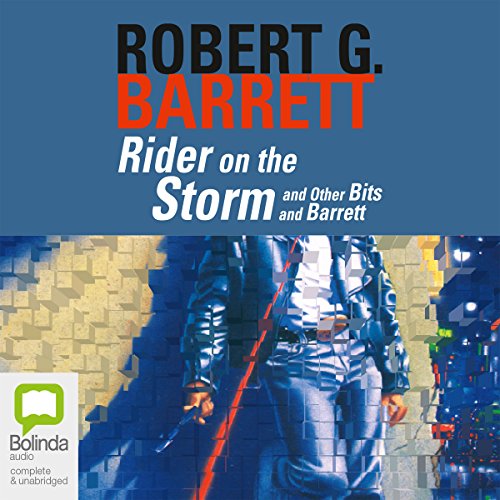 Rider on the Storm

By: Robert G. Barrett
Narrated by: David Tredinnick
Try for £0.00

Rider on the Storm collects stories and magazine articles by one of Australia’s most popular writers, Robert G. Barrett, who voices his own no-nonsense, politically incorrect prose in this audiobook.

Although those unfamiliar with Australian slang might find him hard to understand at first, Barrett’s gruff, blustery performance of his work, delivered as though from a bar stool, allows the warmth and humanity of his writing to shine.

Robert G. Barrett is a self-confessed antagoniser of the 'literary elite' and a master of political incorrectness.

For more than a decade now, Robert G. Barrett has been entertaining Australians with the cocky Queenslander Les Norton and his outrageous exploits.

In this collection, as well as more great Les Norton stories, Robert G. Barrett offers his views on getting published, getting famous, getting the dole and getting a date.

Barrett on acting: 'You get instant fame and recognition: drunks want to fight you everywhere you go.'

On getting published: 'If you are seriously thinking of making a living out of writing in Australia, make sure the people in your local dole office read your books. And hope to Christ they like them.

Rider on the Storm and Other Bits is Les Norton at his worst and Robert G. Barrett at his best - as a columnist, feature writer and short-story teller.

What listeners say about Rider on the Storm