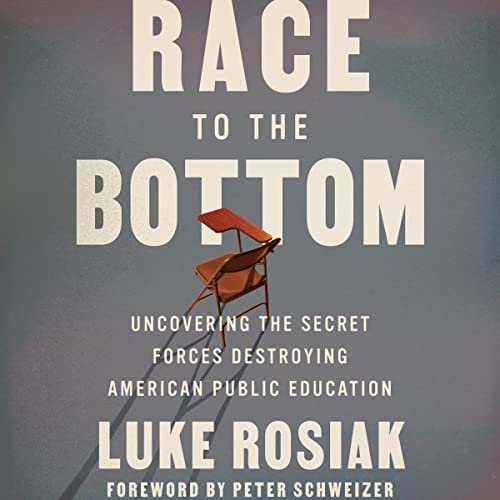 Race to the Bottom

By: Luke Rosiak
Narrated by: Charles Constant
Try for £0.00

Everyone wants: High schoolers to graduate well-prepared for jobs. Improved STEM literacy. Greater achievement for inner-city children. Happiness for all children. So why are liberals spending billions of dollars working against those goals?

In Race to the Bottom, Luke Rosiak uncovers the shocking reason why American education is failing: Powerful special interest groups are using our kids as guinea pigs in vast ideological experiments. These groups’ initiatives aren’t focused on making children smarter - but on implementing a radical agenda, no matter the effect on academic standards.

Nonprofits pump billions into initiatives meant to redress racial inequities. Rather than fixing the problem, districts with a big gap between White and Black test scores hire consultants who claim the tests are meaningless because they are “racist.” These consultants’ judgments allow school districts to ignore their own failures - ultimately hurting minority students and perpetuating racism.

That is just one example. Drawing on his years in investigative journalism, Rosiak did a deep dive into school files, financial records, and parents’ stories. What he found is that nonprofit influence has crept into the educational bureaucracy all over America. Corrupt school boards and quack diversity consultants abound. Teachers drawing government pay claim it’s unsafe to return to in-person school, but “double dip” teaching in-person private classes. And amid all this focus on money and equity, academic standards are crumbling, which hurts American kids in ways we’ll be suffering for decades.

Race to the Bottom is the first comprehensive exposé of the way radical ideology and self-serving administrators are destroying academic quality in America’s K-12 schools. Rigorous and deeply-researched, this is essential listening for anyone who cares about the future of our kids.

What listeners say about Race to the Bottom

Thank you for writing this book!

Listening to this helped me feel less crazy. As an elementary teacher for the past two decades, I have wondered what was behind the nonsensical policies I have experienced. The most unbearable has been students not receiving appropriate consequences for inappropriate behavior. The result has been severely compromised learning environments for most students, and teachers attempting to salvage their sanity in the midst of being blamed for the problems by administrators who bully the teachers who attempt to communicate with them about the situations.

It makes so much more sense. The emporer is not wearing clothes, and we need the silent majority to get involved and say something. COVID has been a wonderful way to expose these problems.

This is literally 100% propaganda.

What would you do if someone in your community-- someone that seems to have the exact same belief system as you, shares the same opinions about society and policy, and, heck, he/she even watches the same nightly news program as you -- paid you $50,000 to write a book that is littered in half-truths, lies, falacies, shiny, racist, + selfish breadcrumbs that ignore reality and are meant to pray upon people who go to the same brainwasher at Fox News--

You get a waste of digital storage space like this... guessing written by a 55+ year old white man who lives for the praise of a cult and to profit off anyone, anytime.

This jackass published an entire book... i can tell you his point in 2 sentences--

The Family, the oligarchical body politic of Right Wing Power in Washington, and every other person who does not have to pay taxes for a religious exemption, is drawing a line in the sand against this:

We should not have to follow your (our-America's) laws against segregation, inequality, racism, and corruption to be able to keep our tax exemptions. Instead, we want to do whatever we want, to whoever we want, with only whoever we want-- and you have to pay us too.

Any parent who currently has a child in an American public school MUST read this book.

This book is like solving a murder mystery. But it solves the crimes of our educational systems, culture, and fall.

Revelatory in so many ways

I bought this book on a whim being interested in public education and why it seemed like everything coming out of it was just getting worse and worse. Talk about getting your money's worth. This book is filled to the brim with information and yet never once in the near ten hour listening time did I feel the author was being redundant or too hyperbolic. The revelations about who is making (ahem, ruining) public education in America are incredibly well researched and certain chapters left me thinking it just couldn't get any crazier or more corrupt....then the next chapter would start. This would all be for nothing if poorly written, but Rosiac's style is superb and mirrors that of someone like Thomas Sowell (who wrote a similar book, Inside American Education, that is worth checking out).

If you are worried about the state of k-12 education and you make one purchase to understand the situation, trust me, this is it.

Deluge with no time to apply and metabolize

I listened to this book on a trip from Houston to Fort Worth and back. I told my daughter that "if you want to be depressed ... I have your answer". This book paints a bleak picture. It is my prayer that a bleak picture is what we need. If you are interested in the damage that can be wrought by focusing on the American education system ... this book is your huckleberry.

Regardless of where you fall on the political spectrum, this book is a must read for anyone interested in the well being of children, families, communities, and the future of our country.

EVERYONE NEEDS TO READ THIS BOOK

Regardless of your political leanings just read this book. It is chilling what is happening to Americas students.

The other half of the story of school

This book was very informative, and filled in a lot of holes in public education and its downfall that only really came to light in the last two years.

I couldn’t finish this book if Audible paid me… make no mistake—this is nothing but political commentary. Listening was like mainlining Fox News and then finishing with a tantrum of “I’m not biased, YOU’RE biased”. The author completely squandered the opportunity to write an honest, insightful tale into why and how the American education system is failing our children. INSTEAD he chose to blame, deflect, hyperbolize, generalize and spew his political opinions ad nauseam. I had HOPED this book would address problems with lack of parental involvement, teacher credentials AND pay (they are VASTLY underpaid!!), poor, dated and terrible curriculum (common core, teaching for testing vs teaching to learn), the poisonous processed food children are being fed at school and at home, how screens are changing childrens’ brains and altering focus, how media-especially social media has eroded our social fabric & contributed to mental health problems, and how hyper- partisan and polarizing politics (of which the author is contributing!) is degrading our culture…and so on. Instead, the author vomited his snarky opinions blaming teachers unions, and big donors—who apparently want to force critical race theory to American children, it seems a
Little far-fetched to think these monied organizations are really that into CRT?! He’ll scare everyone with his over generalizations and try to convince us all that instead of defunding the police (which is not and never was what he portrays it to be, NOR was it ever a mainstream idea), we should defund the schools, instead. This is in no way an honest, open-minded deep dive into problem solving, but rather another right wing dude offering his opinion which is largely based on his anger at his own powerlessness and diminishing status. Use your credit elsewhere!