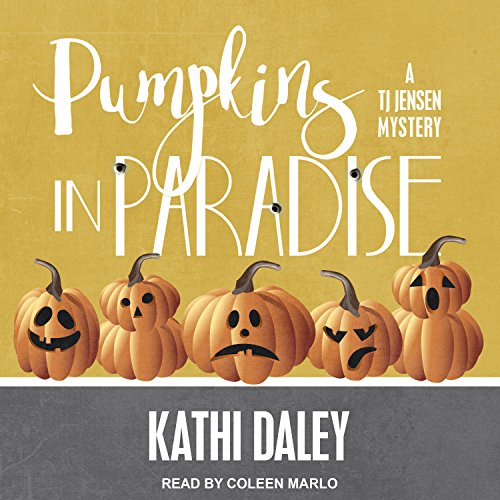 By: Kathi Daley
Narrated by: Coleen Marlo
Try for £0.00

Between volunteering for the annual pumpkin festival and coaching her girls to the state soccer finals, high school teacher TJ Jensen finds her good friend Zachary Collins dead in his favorite chair. When the handsome new deputy closes the case without so much as a "why" or "how", TJ turns her attention from chili cook-offs and pumpkin carving to complex puzzles, prophetic riddles, and a decades-old secret she seems destined to unravel.

What listeners say about Pumpkins in Paradise

The first mystery was to determine if it was murder, followed by whodunit. The second mystery involved some interesting guests to the Lodge and the apparent pretext bringing them there. Add in a very busy life, mourning a good friend, and family madness and there you have it.
The narrator had an interesting presentation.

guessed before end was correct.

Just the perfect story to lighten the mood during our stay at home experience! I'm going to try the next one in the sequence.

The voices used were terrible for some. The story wasn't very good unless you are using it for noise to go to sleep to.
Definitely not worth buying.

the narrator is supposed to be 5'2",and 26 . but she sounds 6 feet tall and 46. I like the mystery. but she also has a speech problem which is distracting. she does try her best but would be better suited in for a different character.

This is a sweet book, but very predictable. It was hard to finish because of that.

TJ Jensen lives a busy life, working as teacher and coach at the high school in Serenity, Nevada, and has been guardian of her 5- and 8-year-old half-sisters since her mother died three months earlier in Pumpkins in Paradise by Kathi Daley. In addition, she helps to manage her family’s resort in this mountain glory, along with her father and grandfather. TJ is also unique in her friendship with the local elderly recluse, Zachary Collins, whom she first met on Halloween at the age of 12 when, on a dare, she went up to his house and discovered that the man was not the monster the whole community had rumored him to be. Since that day, the pair delighted in puzzles of all kinds and mind games that Zachary has been able to create to challenge TJ, his only friend. The book opens about a week before Halloween, which the people of Serenity celebrate with enough verve to make the mountain town a destination for tourists and thus a very busy time for TJ. She goes to visit her friend, only to find him dead in his overeasy chair, with an unfinished chess game and two bowls of clam chowder laid out. The new deputy dismisses the death as natural, especially given Zachary’s old age, but TJ is not so convinced of this fact.

On the table, TJ finds one of Zachary’s puzzle boxes addressed to her. This was a game they often played, where she had to follow a series of clues, often taking a month, to reach her prize, though she recognizes that the game itself was the true prize. Now she must track down the series of clues to get to the message that will help her find out the truth about Zachary’s secrets buried deep in his past and the reality of his death.

This book has great characters that build up the depth of the book. I really enjoyed the developing relationship between TJ and her younger sisters, who are grieving, each in her own way, for their mother and adjusting to life together with relative strangers. I can see real hope for their relationship in future books in this series. As an example, 8-year-old Ashley responds to her mother’s death by fighting, the same way TJ had responded at the age of three when her mother left her and her father for another man. TJ tried constantly to get both girls to redecorate their masculine looking bedrooms, which 5-year-old Gracie happily embraces. But it takes several months for Ashley to become reconciled to the fact that her new life in Serenity is permanent. TJ almost whoops with joy, then, when Ashley asks one day after school if they can go to the hardware store for paint to decorate her room, showing a degree of acceptance of her situation.

I also appreciated the way the whole town unites together to help each other out. Jenna, TJ’s best friend, helps out TJ in learning to rear the girls, being married with her own children. The new deputy has recently transferred from Chicago to Serenity after his wife was killed and himself shot by drug dealers angry at him. He works with TJ to investigate Zachary’s death as she brings him new clues, relying on her to help him connect with the community. Even the visitors to the resort, Maggie’s Hideaway, named after TJ’s grandmother, come alive and connect within the plot. The lesser characters still become real and, I am sure, will add plenty to the spirit of the future books in the series.

I appreciated the dynamic of the mystery in this book. The use of puzzles to find clues was really creatively employed. I also liked the way TJ helps solve the mystery without putting down the police in any way, taking all her potential clues to the deputy instead of trying to solve the case herself. Further, I loved seeing the way TJ’s relationship with Zachary developed over the years and the way TJ is able to uncover details, bit by bit, of his life.

The audio edition of this book is narrated by Colleen Marlo. She does a great job of performing the book and brings it to life, especially the descriptions of the area and the voices she gives to the characters. It must be easy to do a great job narrating this book because of the quality of the writing, or maybe Marlo just makes it seem that way. In any case, her characters do come to life, with a great performance. Sadly for me, since my chronic daily migraines prohibit me from doing much reading of books visually, only three of Daley’s books have audio editions, despite this prolific author’s close to 100 books.

I greatly enjoyed Pumpkins in Paradise. I had never heard of the book until I came across it in an Audible sale, where I bought it with no prior knowledge. I am very glad that I did because I have now found a new author to love, though I’m really disappointed in the lack of availability of audio books to read. I give this book five stars.

Can't wait for the next in the series!

Yes Very well written, great character development. Good good story line. Well written and thought out. Keeps you guessing. Easy to listen to dialogue. This is really important especially when listening to a book rather than reading it yourself.

TJ the main character. While the "heroine" she was pretty believable. Often the heroines are not.

Have you listened to any of Coleen Marlo’s other performances before? How does this one compare?

No but I have to say, I am going to research what other books she had narrated. Her narration has all the components that make a great narrator! Wonderful inflection and timing. Clear precise speech and she has the ability to change her tone and depth of her voice, and is consistent with it so you immediately know which character is speaking or if is as the narrator. A good narration makes a good book better and I have learned to listen to a sample first of a book I might be interested in buying on Audible.

Yes and no. As I listened to the book, and found the story and narration to well done, towards the end, I did not want it to end and held off listening to the last 18 minutes on their own. I knew this was the place all the loose ends would be tied up and new seeds of the next book planted and I wanted to really enjoy it all. I was not disappointed!

Well worth the time and money to purchase and to listen. This is a book by an author I will now follow and a narrator I will turn to for more great listening. My thanks to them both and the other people responsible for the production for the hours of pleasurable listening.