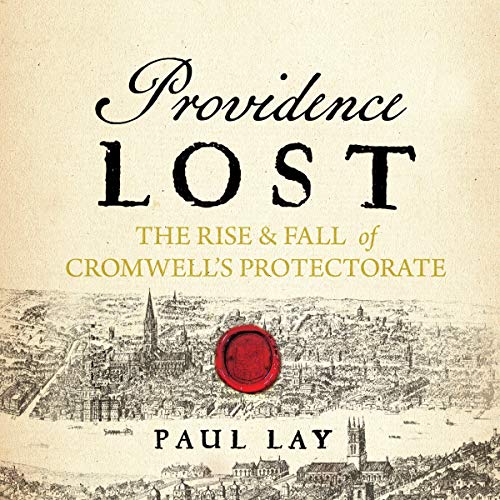 By: Paul Lay
Narrated by: Gordon Griffin
Try for £0.00

England, 1651. Oliver Cromwell has defeated his royalist opponents in two civil wars, executed the Stuart King Charles I, laid waste to Ireland, and crushed the late king's son and his Scottish allies.

He is master of Britain and Ireland. But Parliament, divided between moderates, republicans and Puritans of uncompromisingly millenarian hue, is faction-ridden and disputatious. By the end of 1653, Cromwell has become 'Lord Protector'.

Seeking dragons for an elect Protestant nation to slay, he launches an ambitious 'Western Design' against Spain's empire in the New World. When an amphibious assault on the Caribbean island of Hispaniola in 1655 proves a disaster, a shaken Cromwell is convinced that God is punishing England for its sinfulness.

But the imposition of the rule of the Major-Generals - bureaucrats with a penchant for closing alehouses - backfires spectacularly. Sectarianism and fundamentalism run riot. Radicals and royalists join together in conspiracy.

The only way out seems to be a return to a Parliament presided over by a king. But will Cromwell accept the crown?

Paul Lay narrates in entertaining but always rigorous fashion the story of England's first and only experiment with republican government: he brings the febrile world of Oliver Cromwell's Protectorate to life, providing vivid portraits of the extraordinary individuals who inhabited it and capturing its dissonant cacophony of political and religious voices.

"A compelling and wry narrative of one of the most intellectually thrilling eras of British history." (The Guardian)

What listeners say about Providence Lost

An interesting story well told but if you're not already familiar with the setting and characters you will be lost.

Not an overview of the Commonwealth

Gets bogged down in Royalist minutiea. I'd prefer to know whys and wherefores of life.

A relatively short journey through a very interesting and much overlooked period of English history which marked some of the ultimate divisions between on the one side monarchy, religion, reformation, colonial exploration, feudalism, and on the other modernity, revoltuion, ideology, empire, and industrial capitalism. It is worth having some background to the English Revolution going into this. Christopher Hill was an excellent scholar of the English Revolution and has both books which provide valuable background to this period and books that get into the weeds of individuals and specific groups and movements acting at this time. Also, the fantastic Revolutions podcast hosted by Mike Duncan explores the English Revolution for its first season and this will again provide valuable background to a historical moment with a lot of moving parts.

Good in the end

Jumps about to much at the start to get a good idea of what is going on, but after a while it settles in to coherence. Most informative.

Rambling and a bit disjointed.

Parts of this book were interesting but, as a whole, it didn't flow together very well. The characters in the book were not explored in any depth, and had a sketchy feel. The narration didn't flow very well and there were some strangely placed pauses. I don't know if this reflects the narrator or the text. The Protectorate is an interesting period in history that deserves a more coherent account than this.

Although purportedly about the rise and fall of the Protectorate, this book is far from it. Rather, it is more a collection of events from the period, which are interesting in their own right, but are simply not what the book is being sold on. Both Cromwell's dismissal of the Rump Parliament, and the failure of the Protectorate could each fill a book but instead they're given a cursory treatment.

The narrator has quite a mellifluous voice, unfortunately he does have a habit of inserting pauses which aren't warranted and even more annoyingly, completely mispronounces multiple names.

Despite these criticisms, this is still worth listening to if you have an interest in the period, but don't expect to learn much about the rise and fall of the Protectorate.