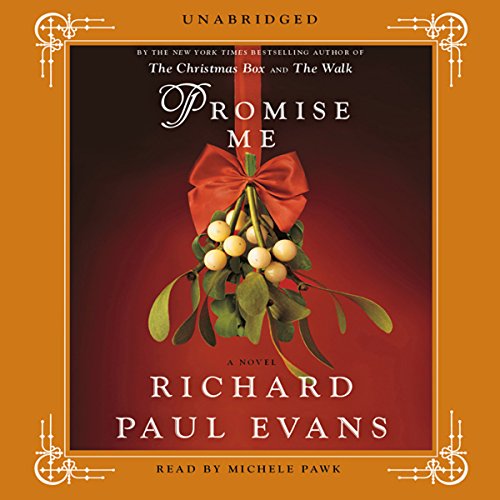 By: Richard Paul Evans
Narrated by: Michele Pawk
Try for £0.00

"As you read my story, there is something I want you to understand. That in spite of all the pain—past, present and that still to come—I wouldn't have done anything differently. Nor would I trade the time I had with him for anything—except for what, in the end, I traded it for."

Beth Cardall has a secret. For 18 years, she has had no choice but to keep it to herself, but on Christmas Eve 2008, all that is about to change.

For Beth, 1989 was a year marked by tragedy. Her life was falling apart: her six-year-old daughter, Charlotte, was suffering from an unidentifiable illness; her marriage transformed from a seemingly happy and loving relationship to one full of betrayal and pain; her job at the dry cleaners was increasingly at risk; and she had lost any ability to trust, to hope, or to believe in herself. Then, on Christmas Day, as she rushed through a blizzard to the nearest 7-Eleven, Beth encountered Matthew, a strikingly handsome, mysterious stranger, who would single-handedly change the course of her life.

Who is this man, and how does he seem to know so much about her? He pursues her relentlessly, and only after she's fallen deeply in love with him does she learn his incredible secret, changing the world as she knows it, as well as her own destiny.

From the New York Times best-selling author of the beloved classics The Christmas Box and The Christmas List comes a breathtaking story of the transcendent power of love.

What listeners say about Promise Me

Complete waste of a credit

This is seriously one of the stupidest books I have listened to. Narrator is so annoying in addition to a terrible story and writing.

A great story to enjoy during the Christmas season. I listened to most of Evans books and enjoyed them all.

Would you ever listen to anything by Richard Paul Evans again?
The only reason I gave it two stars is because I do enjoy a good RPE's book. This is by far the exception. I hated whole premise of the book. Very odd for Mr Evans to come up with this idea. Makes you wonder if he was the actual writer.

Excellent read! I love the time travel element and living life, and changing the future.

Not his normal fictional love story, but has a unique twist that’s off his normal writing, yet definitely of his style.

Since first discovering the books of Richard Paul Evans three months ago, I have now listened to thirty of his books and have loved all but one. This book offers the same sweet messages as so many of his books do, and that is why I loved this one also. Some people simply do not care for any hint of a Sci Fi or Futuristic theme in stories, which of course is simply a matter of personal taste. But even though I could foresee where this story was going fairly early on, it was still a warm and wonderful story with a good message, and that is what I look for in Evans' writings. I was not disappointed in the least.

The book was good at the beginning. It had a very solid and believable storyline. The characters were relatable. Then....it got weird.

Loved the story
I would LOVE to livea story like this, Well most of it anyway!

weird story compared to Evans other books. The narrator was hard to listen to.
still a fan of evans