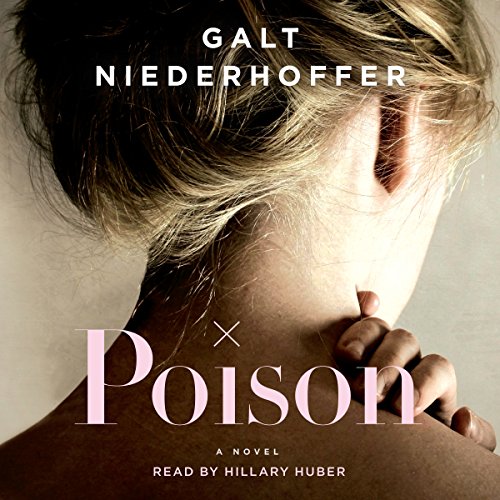 By: Galt Niederhoffer
Narrated by: Hillary Huber
Try for £0.00

From acclaimed film producer and novelist Galt Niederhoffer comes another no-holds-barred examination of the American domestic ideal. Poison is a literary psychological thriller audiobook about a marriage that follows minor betrayal into a bubbling stew of lies, cruelty, manipulation, and danger.

Cass and Ryan Connor have achieved family nirvana. With three kids between them, a cat, and a yard, a home they built and feathered, they seem to have the modern family dream. Their family, including Cass' two children from previous relationships, has recently moved to Portland - a new start for their new lives. Cass and Ryan have stable, successful careers, and they are happy. But trouble begins almost imperceptibly. First with small omissions and white lies that happen daily in any marital bedroom. They seem insignificant, but they are quickly followed by a series of denials and feints that mushroom and then cyclone in menace.

With life-or-death stakes and irreversible consequences, Poison is a chilling and irresistible reminder that the closest bond designed to protect and provide for each other and for children can change in a minute.

What listeners say about Poison

it was a very predictable book, you could tell where it was going the whole time and i felt that it was a rush to wrap it all up at the end

this book has bones of a great plot, but any dramatic tension is completely destroyed by tedious sections of verbiage, ridiculously over the top metaphors, and pointing out the blindingly obvious.

the plot is good - it is not brilliant, and it has got some flaws, but the story is read so well that I didn't really focus on it. It is well written and entertaining and the ending feels good.
I can really recommend it.

Couldn’t get into the story because of the narration

The story had promise even though it was disjointed. But I couldn’t listen for another second. The narrator (Hillary Huber) used a pseudo sexy voice that made it unbearable. I couldn’t stand her various voices. Hard pass and if I think of completing this book I’ll wait for the print version on the bargain rack. I keep forgetting to preview narration but I didn’t this time and she seemed ok in the sample. But it was tedious!!!

Highly recommended! The book title is more indicative than it lets on and the summary doesn’t do it justice. The story seems like it will unfold under standard, everyday events and circumstances - whether or not pleasant. However, it takes a razor sharp turn early on and accelerates until the end. I wish it was a little more subtle in the “plunge of thrill” in the sense that we knew more about their lives and why the characters take such drastic measures so soon. Nonetheless, this was a great thriller with twists and turns, an unusual dynamic of how families are formed and why.

This is an edge of your seat psychological thriller. It kept me up late at night listening. I couldn't stop! The book is about Cass and Ryan, a married couple starting fresh in a new town in Maine from NYC. They seem to have it all, until very early on cracks and then huge chasms appear in their marriage. The book is told through the eyes of Cass. Scary, sometimes baffling, the tale is sure to cast a range of emotions. I loved this book and hope they make it into a movie. That said, I did not like the narrator. Sometimes she sounded like a radio dj and others robotic. In fact, my husband came in while I was listening and said "wow that sounds like a robot!" If the book wasn't so compelling, I probably would have gave up due to narrator. Other than that this is a must read/listen!!

I'm only half way through...

I don't usually have any problems finishing an audiobook, even if I think it's terrible. However, I am finding it extremely difficult to continue listening to this one. I honestly can't tell if the storyline is just that boring, or if it is the narrator making it seem this way. The narrator has such a conspiratorial/patronizing (almost trying to be seductive) way of speaking - like every single sentence she is saying has some other meaning or like she knows something that you don't. This isn't the first book I have listened to with this narrator. The first few books I listened to with her as a narrator didn't bother me, (although her &quot;man&quot; voice is always the same and it makes me feel uneasy for some reason) but I don't know how much more I can take of this book. It's one of those books that make you stop and think, &quot;Wait. Where is she? Let me see how much more of this book I have left...&quot;

That being said, I WILL finish this book and I will update this if I feel any differently once I have completed it. I'm hoping it picks up soon. I just had to vent.

What disappointed you about Poison?

I have listened to more audio books than I can count and have rarely been compelled to write a review, however, I believe the positive reviews of this book desperately need a counter-balance. POSSIBLE SPOILER This story is so bizarrely unrealistic and constantly pointing at a lack of feminism and discrimination against woman as the reason why an entire legal system, police and family would not see reason. (To clarify, I am a woman, and this may be why it's even more insulting) Simply because the victim is a woman and the perpetrator a man, this book claims this causes everyone to lose their common sense and act in a way no half reasonable person, let only several people would behave. I couldn't get through the entire book - it was so frustrating to have the main character be so obtuse and continue to follow such a crazy track and do insane things while we're supposed to believe she's an intelligent, academic, sane person. I am sorry to write such a harsh review - this is the only book I've read by this author and perhaps other novels are better and not just a platform for unrealistic feminist complaints. Unfortunately, after this book, I won't be finding out....

What character would you cut from Poison?

I had high hopes for this book after reading the synopsis; however, the story fell way below expectations.

First- I was not a fan of the narrator. Her voice sounded way too cheerful for the setting of the story.

Second- the characters were underdeveloped, which made it difficult to form a connection with.

Finally- 90% of the storyline was completely unrealistic. Who goes into the ER ranting about poisoning? Why didn’t Cass just express her symptoms and let the doctors perform the appropriate tests without the pretext of her suspicions? Also- who gives their credit card number to a stranger and the keys to their house?

I almost didn't finish listening. I just kept hoping the story would actually take an interesting turn but it just kept dragging on and on and on with monotonous unnecessary detail. characters were poorly built and even more poorly executed. rarely take the time to write a review but this one deserved it.

Could have been a great book

Such a good beginning and story line, but became so repetitious it was boring. I find it hard to believe a woman who knew her husband was poisoning her would continue numerous times to but herself in his company even eating chocolate cake she saw him put the poison on. No way she would have put her children in his reach allowing him to poison one of them also. The narrator was so monotone I almost stopped listening at first chapter

Would have liked the book better if it was just not so long winded. I really wanted to get on with the story

Although this is a story of murderous intent, the author still conveys normal family life. I really like both those threads happening at the same time. The victim draws so much sustenance from family. All I really want to say is that I enjoyed this book more than enough to give it five stars. It is exemplary for its genre: domestic psychological suspense.