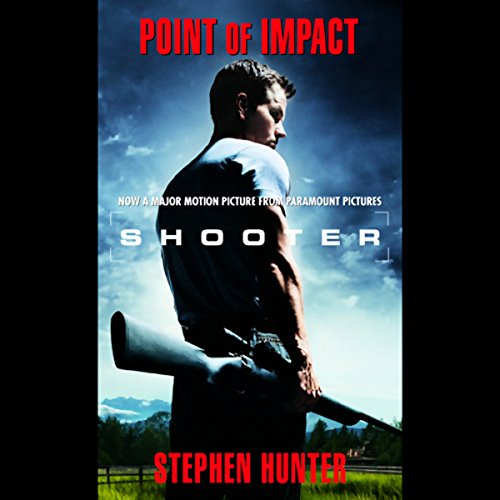 By: Stephen Hunter
Narrated by: Beau Bridges
Try for £0.00

He was one the best Marine snipers in Vietnam. Today, 20 years later, disgruntled hero of an unheroic war, all Bob Lee Swagger wants is to be left alone and to leave the killing behind.

But with consummate psychological skill, a shadowy military organization seduces Bob into leaving his beloved Arkansas hills for one last mission for his country, unaware until too late that the game is rigged.

The assassination plot is executed to perfection until Bob Lee Swagger, alleged lone gunman, comes out of the operation alive, the target of a nationwide manhunt, with his only allies a woman he just met and a discredited FBI agent.

Now Bob is on the run, using his lethal skills once more - but this time, to track down the men who set him up and to stop a dark conspiracy aimed at the very heart of America.

"Hunter passes almost everybody else in the thriller-writing trade as if they were standing still." ( New York Daily News)
"Tautly written...the plot makes a number of turns before swooping to a conclusion where patriotism and personal integrity triumph." ( Library Journal)

What listeners say about Point of Impact

Great but I read the original.

It was good to listen to this book again, but I should have looked for the unabridged version as some of the story detail was lost. still enjoyed it though.

Beau Bridges ruined it for me...

I never like getting abridged books because I think too much of the story is lost when parts have to be cut. I thought the music and sound effects took away from the story and were totally unnecessary. I think Beau Bridges was the worst narrator I have ever listened to and I've listened to quite a few considering I have more than 1300 books in my library! I will try another book written by Stephen Hunter as long as Bridges is not the narrator. I would not recommend this book to anyone.

This is about the Audible version

Well it continues to be a sorry, abridged version of the book.


For some reason, audible produced an abridged version of the book and wasted memory by using needless sound effects.

Then to add further insult, they used Bridges, a gun control advocate, in a book about shooters and shooting. Shame on audible.

This is a really great book! The abridged version was done very nicely. However an unabridged reading would have been better. So many action scenes I enjoyed were not included.

Read D-Man801's review. It is right on the money.
I found the abridged version was overly abridged. I thought the author added great detail about the workings of ballistics, guns and sniperdom but I imagine much of this was removed during the process of making the story shorter. I would have liked to of heard more. I always try to purchase only unabridged versions but I guess a full version of this book is not available.
I like Beau Bridges but this narration was not great, almost as if he was making fun of the story as he was reading it. Perhaps it is too much to ask Beau to overcome bad writing. The music in the interludes was a cheezy, but this fit right in with the story and character names.

Sorry, but not even close to Patrick Obrien series as narrated by Patrick Tull.

Not a fan of abridged versions but I decided to give this one a try, and I am very glad I did, the story was brilliant and the narrator did a wonderful job, didn’t stop listening to it until it was finished, just like a good book you can’t put down. I would recommend this production to everyone.

There was music that kept playing during the reading, this made it difficult to understand at times, especially at 2x speed.
For the story, this is the first time I have ever preferred the movie over the book. The entire book seemed to lack detail and depth.
I was really looking forward to this book as well.

The best of Bob Lee

Sticking close to the real life character that Bob Lee was based on makes this the best of the series. This is a great read.

Good story about the point of view of Bob Lee. Could have done without the music in the reading....

I was disappointed this is an abridged reading. otherwise it was well narrated and enjoyable

Enjoyed how the story turned back and forth between who had the advantage. The story seems too short for the listener to get familiar with all the names. The sniper content is pretty cool.