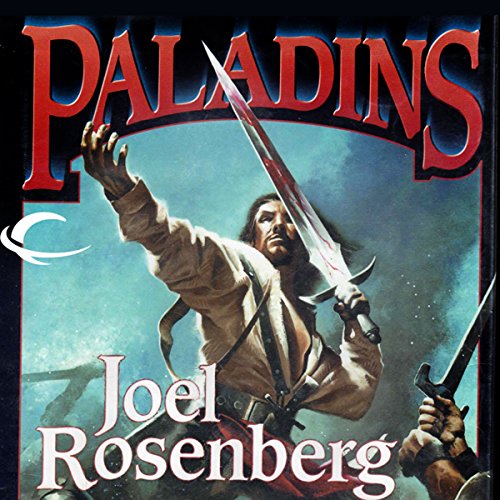 By: Joel Rosenberg
Narrated by: Alex Hyde-White
Try for £0.00

In the 17th century, in an alternate universe, much of Europe, Asia, and the New World are part of an Empire ruled from England. The Order of Crown, Shield, and Dragon is a legion of special agents for the Crown: special emissaries in time of peace, and invincible warriors in more violent times. They carry special weapons: swords, each of which contains the soul of someone of great power. Even in the hands of a knight of the Order, even wielded in the cause of righteousness, a red sword is terribly dangerous to its owner and all around him. In less virtuous hands, a red sword is the most dangerous and powerful weapon known to mankind. Now, three knights of the Order have just tracked down a previously unknown red sword which was found on a Grecian shore, and which shows all signs of having been recently forged. Worse, the mind encased in the sword remembers that it was only one of many which were cached in the hold of a mysterious sailing ship, origin unknown.

What listeners say about Paladins

Ok quick read, but nothing to write home about.

What did you love best about Paladins?

The alternate timeline is interesting as is the idea of the swords.

Would you be willing to try another book from Joel Rosenberg? Why or why not?

Yes, he is not a great author but writes solid three's (out of 5) on a consistant basis. This book is no different. None of his work will rock your world, but they are all solid decent books.

Would you listen to another book narrated by Alex Hyde-White?

Yes, he did a very good job and has a good range of voices.

It is an ok book, but not great. If you are looking for a quick satisfactory read this one is an option.

this book needs to be remastered

What was most disappointing about Joel Rosenberg’s story?

If you could play editor, what scene or scenes would you have cut from Paladins?

the edit of this book drove me crazy. every paragraph fades out. i listen on my phone and this usually means i have an incoming call. this is very distracting and after a little while of this i stopped listening. i cannot comment on the story line or the narrator because the fading was such a nuisance. i hope this problem gets fixed.