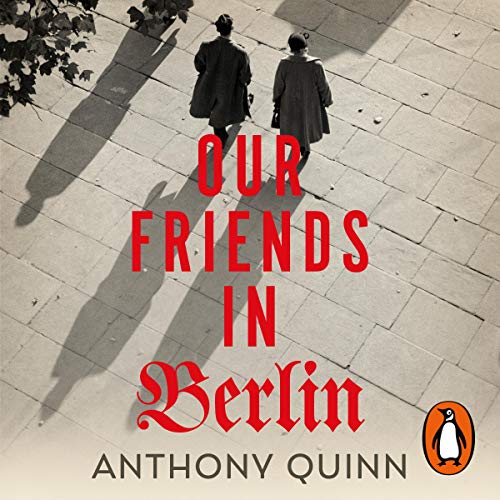 Our Friends in Berlin

By: Anthony Quinn
Narrated by: David Rintoul
Try for £0.00

Random House presents the audiobook edition of Our Friends in Berlin by Anthony Quinn, read by David Rintoul.

London, 1941. The city is in blackout, besieged by nightly air raids from Germany. Two strangers are about to meet. Between them they may alter the course of the war.

While the Blitz has united the nation, there is an enemy hiding in plain sight. A group of British citizens is gathering secret information to aid Hitler’s war machine. Jack Hoste has become entangled in this treachery, but he also has a particular mission: to locate the most dangerous Nazi agent in the country.

Hoste soon receives a promising lead. Amy Strallen, who works in a Mayfair marriage bureau, was once close to this elusive figure. Her life is a world away from the machinations of Nazi sympathisers, yet when Hoste pays a visit to Amy’s office, everything changes in a heartbeat.

Breathtakingly tense and trip-wired with surprises, Our Friends in Berlin is inspired by true events. It is a story about deception and loyalty - and about people in love who watch each other as closely as spies.

What listeners say about Our Friends in Berlin

This novel has me puzzled as how something so contrived and banal could ever be published. The writing style is dreary, long winded dirge weighed down by unnecessary detail and lists whilst having little or no plot related to it’s title. The author doesn’t seem to know if it’s a spy story or a love story and it ends up being neither. I listened to it on a long journey and would have given up had l an alternative. David Rintoul’s narration was as always excellent and he tried hard to breathe life into the deathless prose. There were some very loose ends left and l wonder if they are intended for a follow up. I hope not. If you a decent WWII spy novel try Alan Furst, at least his stuff has drama, tension and research.

Really disappointing. A great idea but badly executed One dimensional female characters, some huge plot holes. The heroine accident mentions the code name of top secret operation in a conversation with a man she’s just met. Oh dear no no no no no.

I enjoyed this book and the narration was very good. It didn't set my world on fire but I will give the book to a friend although I wouldn't build it up.

Started well, but dropped off

Intriguing to start, but then got confusing and plodding. Ultimately I didn't care about most of them, and that's a bad thing

This was a nice story but lacked enough depth and trailed off at the end.

I liked the characters and the dialogue and descriptive prose. David Rintoul's narration is excellent. But there is a huge flaw in the story. Spoiler alert! A key part of the story is the existence of Operation Fortitude, the Allied deception plan that persuaded Hitler that the D-Day landings would take place in the Pas de Calais rather than Normandy. As well as novels I've read lots of history and biographies from this period. Fortitude was possibly the most closely guarded secret of the war yet in this novel even the most lowly MI5 officer knows all about it and is happy to discuss it with just about anybody he/she feels is a decent sort who is probably on the right side. It's laughable and ridiculous. Anyway, it's still an enjoyable listen and the worst of this kind of silliness is saved until the last quarter of the book.

this is s really lovely book of espionage and double dealing and relationships. well written

Disappointing after the Hype but smashing narration

Incredibly unrewarding convoluted story with no heart or soul to rely on. Central characters unresolved and disappointing.

D Rintoul manages to read female character’s without patronising them and does not in fact feminise his voice at all: one of my favourite readers.

After a somewhat clunky & cliched start, this book developed nicely into an entertaining tale. Good narration compensated for some of the more obvious leaps in the narrative.

I thoroughly enjoyed the book and the narrator was excellent. However the story that had so potential failed to live up to expectations in the final chapters.
I still enjoyed it, but think what might have been!