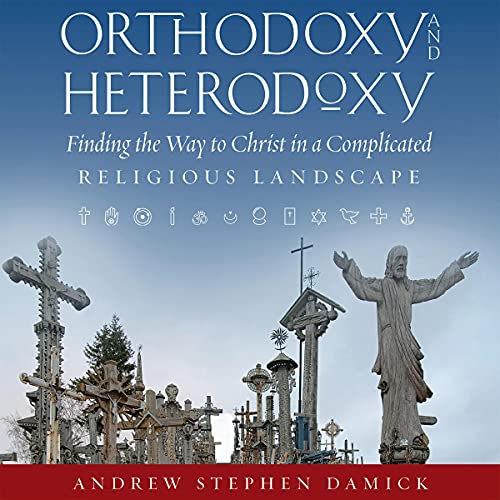 Orthodoxy and Heterodoxy: Finding the Way to Christ in a Complicated Religious Landscape

Are you an Orthodox Christian who wonders how to explain to your Baptist grandmother, your Buddhist neighbor, or the Jehovah’s Witness at your door how your faith differs from theirs? Or are you a member of another faith who is curious what Orthodoxy is all about? Look no further. In Orthodoxy and Heterodoxy, Fr. Andrew Stephen Damick covers the gamut of ancient heresies, modern Christian denominations, fringe groups, and major world religions, highlighting the main points of each faith. This audiobook is an invaluable reference for anyone who wants to understand the faiths of those they come in contact with - as well as their own.

This edition of the best-selling Orthodoxy and Heterodoxy is fully revised and significantly expanded. Major new features include a full section on Pentecostalism and the Charismatic movements, an expanded epilogue, and a new appendix (“How and Why I Became an Orthodox Christian”). More detail and more religions and movements have been included, and the audiobook is now addressed broadly to both Orthodox and non-Orthodox, making it even more shareable than before.

What listeners say about Orthodoxy and Heterodoxy: Finding the Way to Christ in a Complicated Religious Landscape

Brilliant book, in depth chapters. it covers everything you will need to understand Christianity and even other faiths

this was a great book to explain the differences between orthodoxy and heterodoxy. it also shows the dangerous that heterodoxy contains for the orthodox believer.
sadly this book is lacking a firm commitment to make a statement of the orthodox belief in the role of heterodox within orthodoxy eg. whether a Roman Catholic is a true Christian and separates brother or not. their are many who would argue on each side but it would be nice to have heard more in the topic from the author.

This book has helped me so much, it has deepened my understanding of its subject. The hours passed so quickly as it is so engaging. A book I know I will go back to again and find more and more within it to think on. Thank you!

Father Andrew in his book does a good job of summarising the myriad Christian and non-Christian denominations throughout the world.

I come away with a greater understanding of the world and of my own Orthodox faith, which is a good result in my book. Father Andrew is a good reader too, so the technical aspect was well done.

Christian Denominations in a Nutshell

I believe that this book holds an invaluable place in every Christian's library. In today's 'religious landscape' as the title states, it can be very confusing as to why the church we personally attend states belief(doctrine) in one way and other Christians believe something completely different. Most Christians I know all profess belief in the same Bible, yet that sometimes seems to be the only commonality we have. It is equally difficult to find the basic history of different denominations of Christianity without too much additional information or lots of digging.
Fr. Andrew Stephen Damick begins by introducing why our Christian doctrine matters and what the Orthodox Church teaches beginning at the time of the apostles. I felt like Fr. Andrew does a fantastic job of being sensitive to not offend non-Orthodox Christians, while at the same time upholding the truths that the Bible and Orthodox tradition teach. He humbly acknowledges that no one can truly be unbias in their perspective, but notes that he makes an effort to make this book factual and when he is generalizing he makes a point to say so. After discussing history and Orthodoxy, the book discusses the schism between Orthodoxy and Roman Catholicism, then it moves into the reformations and different branches of Evangelicalism. There were so many different denominations listed, I will definitely be listening again to pick up more details that I'm sure I missed. Fr. Andrew included many definitions of terms that I hear defining Christian groups without having understood fully what they meant. The last few sections of the book included Non-Christian Religions and finally Atheism and Agnosticism.
This book is read aloud by Fr. Andrew and he reads clearly and articulately. I found the pace to be pleasant. The book is long, but I already want to relisten to it and plan to do so several times more. I very much enjoyed the content of this book and would definitely recommend it to anyone seeking to understand how the Christian faith ended up where we are today with over 40,000 different denominations.

Excellent book. Learned more than I imagined - even and especially about Orthodoxy. I’m also a convert and am beyond grateful for Orthodoxy - my relationship with Jesus Christ - being in a place at every Divine Liturgy where heaven and earth touch. The truth of Orthodoxy resonates in my heart, mind and soul.

Thank you Fr. Damick for your honesty, your fairness, your humility and sharing your faith.

Definitely a good synopsis of different “christian” denominations and how they different in traditions and doctrine.

Must read for all Protestants

This is a book that should be read by all Protestants and Evangelicals - it will open your eyes to the failures of Sola Scriptura.

There is a wealth of meaningful information here. For those who do not understand why there are distinctions between religious views, or why those distinctions should be important, this is a must listen

A Must Read for All Orthodox Christians

Where has this book been in my life? Truly, this book is a fantastic Orthodox apologetic--both a primer on multiple other Christian and pseudo-Christian denominations as well as a clear and concise explanation as to how and why those doctrines differ from the Orthodox teachings.
To be fair, I was a little hesitant when I first started to listen (Audible version) to this book. The title was interesting, but seemed very academic--I feared that this would be beyond my understanding as a lay person and not a seminarian! However, I was pleasantly surprised to find that this book was accessible to both the lay person, as well as providing the depth of intellectual and spiritual analysis that would attract and interest a more learned scholar. Fr. Damick works through a number of prominent, and less prominent, denominations, and proceeds to give a historical context of the religion, an overview of the main tenets and belief, followed by a concise explanation as to how the faith differs (or in some cases is similar to) Orthodoxy and the teachings of the Apostles and the Church Fathers. I wish that I had found this book sooner, during the time period when we were living away from a large Orthodox community and we attended many children' events at other churches--I would have loved to have been able to better explain our faith in the context others. Similarly, my children attended a Roman Catholic elementary school and my husband and I spent countless hours trying to figure out a way to explain, both to our children as well as our friends from the school, our faith and how we are similar, yet wholly separate from Roman Catholicism. This book, in particular, did a fantastic job of laying out the key distinctions between Orthodoxy and Roman Catholicism in a clear format--easy to understand as well as providing the ability to explain to others.
Additionally, and as a pleasant surprise, I was delighted to find that Fr. Damick's "shout out" to the "Mikes" in the forward included one of the "Mikes" who is a dear friend of our family!
I highly recommend this book, in the Audible version, and I plan to purchase this book in print as well.

Orthodoxy and Heterodoxy: Finding the way to Christ in a complicated religious landscape. The book was written by Father Andrew Stephen Damick and narrated by the same. This book is amazing. It is one I have wanted to read for a long time and thanks to Ancient Faith Publishing I was finally able to listen to it. This book was everything I was hoping it would be and more.

First the writing style was easy to understand, clear and concise, but also from a different worldview than I am used to. This was a good thing not a bad thing. I had taken world religions in school and I did a lot of seeking before I became Christian and Roman Catholic, however most of the learning I did and the knowledge I acquired was always from a protestant view or at best a roman catholic view but mostly protestant. This was my first real foray into the subject matter from an Orthodox perspective. Also, as the narrator was also the writer, the narration was smooth and flowed well, though I did speed it up just a hair bit due to the fact that I prefer a slightly faster speech as my speech patterns are faster. That is my own preference and not a negative in any way to the book. The chapters were a good length and the material went in a great order starting with Orthodox itself and then branching out. It covered subjects in a way you would think of as a pyramid. Orthodoxy at the top roman catholic next … then the reformation… evangelicalism.. Branching out further from orthodoxy to even include religions that werent mainstream and then non christian faiths. The main tenants of each were covered and how it related to orthodoxy if at all. So far I”ve listened to the book twice and I”m sure I will again. I would recommend this book for anyone and everyone. Orthodox or not.. Christian or not. The knowledge you will gain is incredible. I learned so much of what relates … what doesn’t … it was truly fascinating. I cannot wait to read the other books the author has written and I hope that it happens sooner than later.

Come for the knowledge and stay for the cargo cults!

An excellent walkthrough on Christianity’s origins and the divides as they came to be. Useful for any branch of Christianity. Heterodoxy comes in many forms and flavors. Find out the beginnings of your tradition.

Fr. Andrew put a lot of work into this. If there’s something you disagree with you may find it surprising that your own outside research will hold it up as correct.

Towards the end you will come across some other worldviews. Including tribes that reenact preparation for cargo plane landings in hopes of returning goods from the heavens. Many decades after the last plane left.