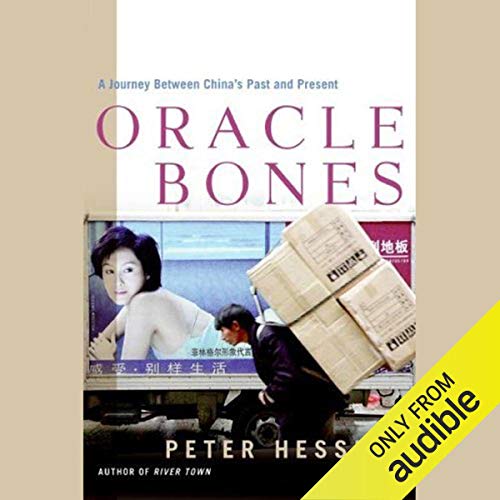 By: Peter Hessler
Narrated by: Peter Berkrot
Try for £0.00

A century ago, outsiders saw China as a place where nothing ever changes. Today, the country has become one of the most dynamic regions on earth. In Oracle Bones, Peter Hessler explores the human side of China's transformation, viewing modern-day China and its growing links to the Western world through the lives of a handful of ordinary people. In a narrative that gracefully moves between the ancient and the present, the East and the West, Hessler captures the soul of a country that is undergoing a momentous change before our eyes.

What listeners say about Oracle Bones

Really good book - have listened to it at least 5 times and it still keeps me interested. Have also listened to his other 2 books on here, both just as good - wish there was more! You really learn about China and it's people, from history to day to day living of ordinary people - would definately recommend it to all

beautiful book and it is possible to get over the narrator but a bit of a shame, none-the-less.

Great book, the reader is generally quite good but his Chinese pronunciation is pretty bad.

Great Book, except for the narration.

If you are interested in Chinese/China, this book is really good. The only problem is the narrator thoroughly an completely butchers the Chinese words in this otherwise terrific audio book.
To be fair to the narrator, his voice is interesting and expressive. It's just the Chinese language parts that do him in. Maybe if I did not speak Chinese I would not care so much.
However, as a Chinese Language and Lit graduate who lived in Asia for a few years, I was taken away with this book. The author is great. I will look for other books from Peter Hessler.

Oracle Bones is another excellent book from Peter Hessler. He writes from a unique and insightful perspective. He has lived in China for many years; beginning as an English teacher at a Chinese college. He has remained in close touch with his former students, whose own experiences in working after graduation in the ???New China??? form an important part of the book. Mr. Hessler has also been accredited as a foreign correspondent in China for the New Yorker magazine. As a writer of magazine articles, he has been free to develop stories and themes at much greater length and depth than would have been possible as a reporter for a daily newspaper. In my view that is a big plus for his readers.

His books reflect first hand experiences and conversations with Chinese residents (not all of them native Chinese, by the way) from various walks of life, many of whom he can consider good friends. They also reflect extensive interview notes, some scholarly research, and a whimsical eye for things comic and ironic in everyday life. Mr. Hessler also shares poignant conversations with Chinese who experienced the trials and terrors of the 1960???s ???Cultural Revolution??? and the earlier ???Anti-Rightist??? campaign of the late 1950???s.

As readers we are fortunate that Mr. Hessler has developed considerable literary talent. The writing is clear, suited to the humor or poignancy of the events or conversations he is describing, and has a personal tone that allows us to share his fascination and feelings in what he is seeing and hearing.

I don't even recall why I bought this book. I found it on my IPAD as something half lost in titles and just thought since I had paid for it I would get it out of the way. I spent the next five days in wonderland! What an amazing writer. The best performance EVER for a reading. I traveled the world into universes I never knew existed! China now became a reality for me. I had an agenda to read a group of other books after this as my attention had been swayed in another direction, but once I finished this, that was all forgotten. I had to go back and buy every book this writer has written and the reader has performed. I feel bridged into a country and a culture thousands of miles away from me. I feel I have traveled although I never left my home. I feel I skipped all over the universe although I have been sitting in one neighborhood. THIS is why I read!

Would you try another book from Peter Hessler and/or Peter Berkrot?

What could Peter Hessler have done to make this a more enjoyable book for you?

Teach Chinese instead of teaching English.

If you could play editor, what scene or scenes would you have cut from Oracle Bones?

First Chapter -- the only chapter I read.


I have read hundreds of books about China. In general, those written by Chinese are the best. Those written by Western academics are acceptable but are still often unenlightened and carry the baggage of Western bias. Those written by Western journalists are several rungs below the academics. These writers are usually poorly educated (a la Sarah Palin) and have very little interesting to say. Those written by American teaching English in China are generally unreadable like this book. They are usually written to make a buck and leave the reader less educated than when they began. I think the reason for the last may be that the Chinese students' traditional respect for teachers, good or bad, may have swelled these English teachers heads.

I had just finish listening, on my daily run, Ji Chauzhu's excellent autobiography as the English translator for Mao; and had to suffer through the first Chapter of this book. Instead of doubling the distance of my run every day, I had to cut short of my run today to write this review. I don't think I have the stomach to continue listening. Peter Hessler’s first chapter betrayed a deep disrespect for the Chinese people and for China. The narrator’s condescending tone and lack of effort to pronounce the Chinese words accurately makes the problem worse. When Peter Hessler started sneering at the Nanjing Holocaust and the Nanjing Holocaust Museum, I decided one chapter was enough. If the Jews in American weren’t so vocal, I think Peter Hessler would have sneered at the Jewish Holocaust as well.

Another performer who cannot speak the language

Would you consider the audio edition of Oracle Bones to be better than the print version?

No. I'm going to return the audio book and buy the print version.

Peter Hessler has don a great job of researching this book, and he's a skilled writer.

Who would you have cast as narrator instead of Peter Berkrot?

I wish someone who can actually pronounce Chinese would read the text. It's actually quite important to be able to understand what the performer is talking about, to follow the story.

No. I couldn't get through chapter one; the reader's Chinese was so horrendous.

Please stop hiring people who don't speak Chinese to read books about China! And stop making the performers read quotes by Chinese people in a thick Chinese accent. It's so unnecessary.

Believe the other reviewers - bad pronunciation!

This book was recommended to me by another China-lover, who had also spent a decent amount of time there. It was dry, and that was tough for me, but the narrator also butchers many pronunciations of Chinese words, and even to my American ear, it was painful. I bought this book ignoring the warnings, thinking those must be people who are very fluent. (I have taken about 2.5 years of Mandarin Chinese courses and spent a few months there years back.) But no, if you've ever studied Chinese, his narration will drive you INSANE. If you haven't, well then, you might enjoy this saga of new and old China.

Would you recommend Oracle Bones to your friends? Why or why not?

See above as well; I recommend it for the history and present-day juxtaposition of China. That's why I was interested. I found it too dull for my liking. If you've spent time studying the language, beware of this narration.

Would you be willing to try another one of Peter Berkrot’s performances?

Yes, so long as it's not a book heavily based in an Asian nation.

Hessler writes a wide ranging and incisive account of China at the turn of the 21st century. He is able to present much of the dystopian craziness of China while still humanizing individuals that he encounters. The narrator, however brings the book down. His reading of Hessler's narration and thoughts is fine, and his mispronunciation of Chinese (i.e. Mao Zhidong) is forgivable, but his "Chinese" voice is truly awful and distracting from the narrative.

I loved this book. The scope of it surprised me with its look at history, culture and day-to-day life. You certainly can't understand everything about China by reading a couple of books, but this book and Hessler's River Town have made China a little more accessible for me. The narrator, I believe, did a great job. He sounds like a native english speaker reading for other native english speakers.

The author was a reporter of sorts in China and this is the account of his life there over 10 years. Very interesting view of culture and history. I enjoyed all of it.

The author only look at one side of facts and dismiss all others. A very narrow view of the true civilization of the Chinese historical development and purport that none of the artifacts proved anything but the western biased perspective.