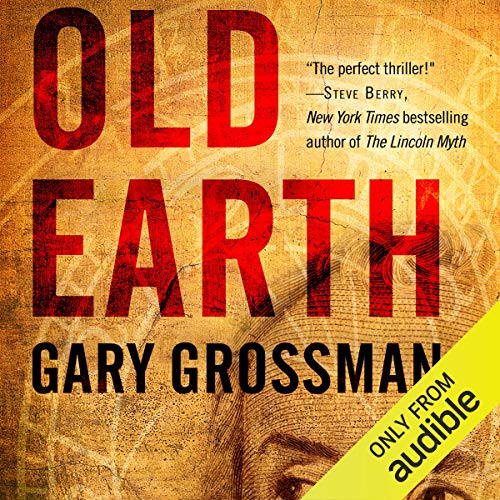 Gary Grossman, author of the wildly popular Executive series, returns with a high-octane thriller that digs into the history of the Earth to find the secrets people are willing to kill to keep concealed.

In the summer of 1601, Galileo Galilei made a startling discovery in the mountains of Eastern Italy that, if made public, could shatter faith in religion, bring down governments, and lead to worldwide turmoil. For more than 400 years, the secret has been guarded by a small group of incredibly powerful people, willing to do everything in their power to keep these discoveries from being made. But now, a university dig in Montana headed by paleontologists Quinn McCauley and Katrina Alpert threatens to expose the secret Galileo unearthed, the event that caused him to turn his study to the stars, and the hidden reason the scientist was convicted of heresy by the Inquisition.

McCauley and Alpert find themselves in a global game of cat-and-mouse, seeking answers for a mystery that has endured for centuries, hunted for what they might discover. Old Earth weighs age-old arguments between science and religion in a tense thriller that spans time and questions recorded history.

What listeners say about Old Earth

I'm halfway through this and just can't listen to anymore. The writing is amateurish and at times seems like it was written by a teenage boy. Constant details about things that don't add any interest or move the story along. Do writers get paid by the word? Seriously, do they? I stopped around chapter 45 because nothing interesting has happened yet and I only made it that far because I was driving for about 5 hours today and listened. At one point one of the characters, Dr. Alpert snickers at a young woman's name -Autumn- because it's so L.A. Really? She's a Dr. and she snickers at someone's name? Oh and she's from a little town called London, you know where they don't have any "unusual" names and everyone is kind of cut off from big cities like L.A. God, I actually hate this book! I've never gotten so annoyed at a book before but this one is just awful.
And the reader? I'm sorry but are you kidding with those accents?? Everyone under 30 (the students) sound like they're straight out of an Archie comic book. The British accents sound Iike an American mocking a Victorian era English accent. A female character with a New England ( supposed to be from family money, New England born and raised) her accent sounded more like a Boston construction worker's. Just an FPI reader, Boston has a different accent from New England. Every time one of the Archie's speak I the whole gang at the malt shop checking out Archie's new jalopy.
Some more scientific references and discussions would have made it tolerable but instead we got lots and lots of minutiae that would have been better left out of the book.
The author clearly knows zero about science, paleontology, etc and didn't bother to do any research making this complete drivel for the first half of the book. I'm not even bothering with the second half.
Use your credit elsewhere.

Truly one of the best novels I ever read

I came across this one completely unexpectedly and it blew me away. It has all the elements of a perfect adventure novel like great tale, excellent characters, fascinating historical interludes, perfect balance between science vs religion and it totally unpredictable turns and twists. Perfect narration and wonderful ending elevate this book to 10/10. I can't recommend it highly for anyone with the interest in the genre or for pure entertainment.

Equal to a Dan Brown Novel

I wasn't sure about this book, but I enjoyed it. It is a decent thriller that combines history, science and a little science fiction. For all of these types of books, you have to suspend a little belief, but this has a somewhat plausible themes. I won't describe it since it would give away the ending.

You have some history, the Vatican, the inquisition, some decent explanation of geology, and some thrills, so it's not too bad. There is some romance as well. If you like Dan Brown books you will like this. I actually think it was better than last Dan Brown book to be honest.

So if you like a little "learning" combined with thrills its quite decent.

Great Story with lots of new twists and turns

If you could sum up Old Earth in three words, what would they be?

What was one of the most memorable moments of Old Earth?

What they found in the end

Take a pinch of Dan Brown, a measure of James Rollins, a little of Indiana Jones and a full measure of something new and you have the recipe for a story that is hard to put down. Wonderful narration and a unique story. I tried and tried to figure out where it was going and couldn't, which made it all that much more intriguing. The only thing I found a little slow was the beginning where the scene kept switching back and forth. It was a bit hard to follow for awhile. The characters were great, the historical and scientific research was excellent and I learned a lot. My only complaint would be the determination that "the world wasn't ready to know about this" premise. Too many authors use that as an out. It always irritates me when others think they have the right to make decisions for the rest of the inhabitants of Earth. There is too much of that going on these days in the real world. Otherwise, I definitely will be looking for other books by this author and other books narrated by P.J. Ochlan. These are the kind of adventure stories I love listening to!

Typical history that must remain secret

Gary Grossman's Old Earth is an unremarkable semi-sci-fi variation on a thriller surrounding an old secret that a dedicated, obscure group is committed to keeping unrevealed. In this tale, a likable, but struggling paleontologist stumbles onto a find buried in Montana that a mystery cabal is intent on remaining undiscovered. The professor and companions, then proceed on a worldwind tour identifying other possible similar artifacts barely staying ahead of their pursuers. The cabal has its own problems with a young, ambitious rookie intent on making his mark.Throughout the tale, there are flashbacks to Galileo as the instigator of this whole escapade, although those section dragged a bit.

As a thriller, the story is passable with decent pacing along with a good series of clues, reveals, and plot twists. Unfortunately, the story has several deficiencies. The mystery cabal dedicated to protecting the secret seems to possess unlimited resources, intelligence, and ruthlessness, along with lots of participants in key locations and positions. As is typical, the "secret" must remain buried because the world population would collectively go insane if the content were revealed. There's also a real disconnect with how this would have been interpreted back in Galileo's time versus today. The author is also a bit too obvious in popping in secret members all over the place when convenient. The cabal has a somewhat arbitrary decision making process on who to kill and who to leave alone. Finally, the ending which is not that unexpected in terms of the secret itself, but is completely out of character with the main protagonist.

The narration is passable with minimal distinction among the various characters.

This was the worst book I have listened to on Audible. Flat characters, a condescending attitude, agonizing dialogue. The plot: You are dumb. Cambridge professors are smart. Yale professors are smarter still. You are too dumb to understand, using religion, ignorance and theological piffle to cope with life. The well funded, centuries old secret society whose bywords are "secrecy" and "no mistakes" is a bunch of hopeless amateurs using explosives to keep things quiet. Yes, explosives. To keep things quiet. Agony.

I forced myself to finish this book. The narrator did as good a job as possible, but it was rough sledding.

Ugh - could not finish

I got through about 2 hours of this book and had to stop. I like action-adventure thrillers as much as the next reader, but the pacing of the story and the simplistic writing style just didn't do it for me. Perhaps it gets better deeper in, but it wasn't worth it for me. Narration was fine and he did what he could with the material provided.

What did you love best about Old Earth?

The diversity of characters was compelling. Additionally, the concepts and history add layers of interest that holds the listener rapt. At least, this one.

What was one of the most memorable moments of Old Earth?

The last hour or so is full of twists and developments that make the length of the listen well worth it.

Which character – as performed by P. J. Ochlan – was your favorite?

Galelio was damn compelling. PJ did a great job with the challenging range of characters and accents overall .

Nothing extreme, but certainly made me research and think about the concepts presented.

This was a great little discovery by a new artist and performer for me. I think you will find this one entertaining, exciting and thoughtful as well. One of the best of 2015 so far. Highly recommended.

It's fine, a little too much repetition

It's fun at parts, slow at parts, interesting concept. I found the constant theological diatribes tiring. It's worth a listen.