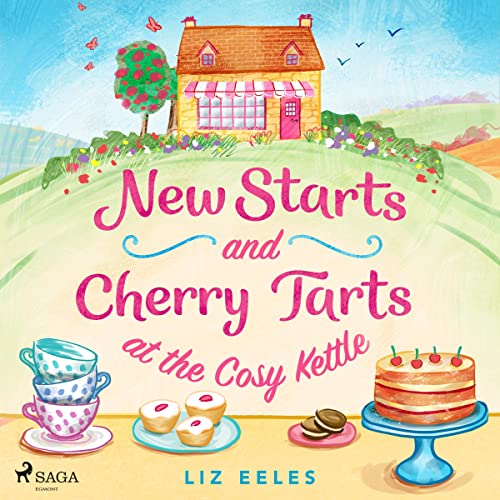 New Starts and Cherry Tarts at the Cosy Kettle

Fans of Cathy Bramley, Debbie Johnson and Jenny Colgan will fall in love with the Cosy Kettle Café, where slices of lemon meringue pie are served in the sun-dappled garden – and where Callie’s new beginning collides with an old flame...

After yet another failed romance, twenty-six-year-old Callie Fulbright is giving up on love. She’s determined to throw all her efforts into her very own, brand-new café: the Cosy Kettle. Serving hot tea, cherry tarts and a welcoming smile to the friendly locals proves to be the perfect distraction, and Callie feels a flush of pride at the fledgling business she’s built.

But her new-found confidence is soon put to the test when her gorgeous ex reappears in the quaint little village. She’ll never forget the heartache Noah caused her years ago, but when they bump into each other on the cobbled streets of Honeyford she can’t help but feel a flutter in her chest...

As Callie and Noah share laughter and memories, she starts to wonder if this could be her second chance at happiness. But when Callie discovers that someone is mysteriously trying to ruin the café’s reputation... she has an awful suspicion that Noah knows who’s involved.

Was she wrong to ever trust him again? And can she find out who’s behind the lies and rumours, before it’s too late for the Cosy Kettle?

Liz began her writing career as a journalist for newspapers and magazines before moving into the health sector as a communications manager and press officer. The low point of her career was abandoning an interview with Cliff Richard after two questions because she was about to faint – her excuse is that she was newly pregnant at the time. Liz lives by the sea in West Sussex with her husband and grown-up daughter. She spends a lot of time meaning to meditate, avoiding exercise, and missing her son who lives in London.