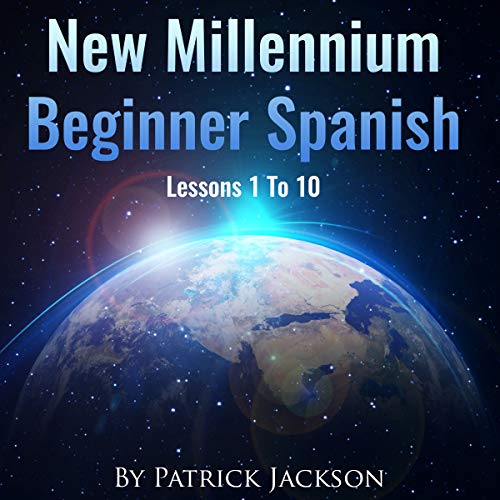 If you're sick and tired of learning 20th-century Spanish when we're living in the 21st century, then pay attention....

Language is changing faster now than any other time in history. Think I am exaggerating? Well, think about it.... We don’t just eat eggs nowadays - we eat cage-free eggs and free-range eggs. We don’t just watch wrestling and boxing - we watch the UFC or MMA. And when we need an extra boost of energy, we don’t just drink coffee. We drink energy drinks, and we take smart drugs or nootropics. And like it or not...we don’t only have male or female any longer. We now also have transgender.

That’s where New Millennium Beginner Spanish comes into play.... Because using a Spanish program designed to teach you Spanish from the previous century - or decades ago - is not going do the job. And here’s what you get with this program:

Most importantly, I’ve used the same engaging and interactive learning method made famous by my Learning Spanish Like Crazy system - which has empowered tens of thousands to speak real conversational Latin American Spanish - with confidence. To master real conversational Latin American Spanish for this millennium, this is what you need to do now....

What listeners say about New Millennium Beginner Spanish How to Learn Spanish for the Web, Technology, Social Media, Veganism and Uber Transportation

One major benefit of this program is that the creators of the program use the same engaging and interactive method in New Millennium Beginner Spanish that they use in their Learn Beginner Spanish Bundle. And I find that method to be one of the most effective for learning how to correctly pronounce all the different words and phrases in the Spanish language.


For example, in the first lesson, you learn Spanish that involves a conversation between two people talking about Facebook. And you learn the Spanish vocabulary for sending someone a Facebook request and adding someone as a Facebook friend.

You even learn Spanish for conversations about eating as a vegan or vegetarian. And unlike older Spanish programs where the characters have professions such as doctors, lawyers, police officers and firemen, the characters in these conversations are personal trainers, graphic designers, digital nomads, yoga instructors and Uber drivers.


The only thing I do not like about this program is that there are only 11 lessons. There are some bonus lessons but I have not listened to the bonus lessons yet. To really cover the topic of Beginner Spanish for the New Millennium, a Spanish program needs to consist of more than 11 lessons, which is why I am only giving this program 4 stars instead of 5. But despite the 4 star rating, considering your available options, this is probably your best and only choice to learn Spanish for this Millennium.

for an intro into spanish, pretty good

I wasn't sure how good this would be as it is only 5 hours long and, well, an audio book. I was pleasantly surprised that it was far more engaging than I thought it would be. I wouldn't say that I suddenly speak fluent spanish, but I did learn a few phrases I didn't know previously. For that, I'd say this is pretty good. The audio quality is good and the narrator says things at a good pace to undersatand each word and syllable. All in all, I'd recommend this series.

I love the concept

I love the concept as well as the execution of the concept in New Millennium Beginner Spanish. It's strange that no one ever thought of this before and came up with a plan to teach modern Spanish.

Spanish the for the New Millennium

There are a ton of learning Spanish programs on the marketing teaching archaic Spanish from many years ago. The best thing about this program is that it teaches modern-day Spanish vocabulary covering everything from technology, the Web, Esocial media, veganism, the UFC and even driving an uber.

One of the best programs you'll find

As a Spanish instructor and language learning enthusiast, I highly recommend this program. I have already recommended this program to a couple of my students and they both seem to be happy with their purchase. I am expecting to see a lot of progress from them as result of this course.

Contemporary Spanish at its best

There really aren't too many, if any, Spanish courses that teach contemporary Spanish. So it's not really all that difficult to be the best course for teaching contemporary or modern Spanish. But even if there were others this one would still be among the best because it's a fun and engaging program that gets results. I don't feel as if I am just learning a bunch of contemporary Spanish words and phrases with this course. I am actually learning conversational Spanish. Get this Spanish course. You'll be happy you did.

I give it a 4 star rating

I want to start out by saying that I received a free copy of this program in exchange for my honest review. I am a member of an audiobook club and we receive free copies of some of the audiobooks found on Audible but only in exchange for our most impartial write-up. Secondly, I want to add that I am a life- long student of learning foreign languages. I have three foreign languages under my belt in which I consider myself either fluent of semi-fluent. In light of my experience learning foreign languages, in my humble opinion, I think I am more than qualified to tell the difference between a superb program, a very good program, a good program, an average program and one that falls below average.


I rate this program as “very good.” It is easily among that top 20% of Spanish programs I have tried. Maybe even in the top 15%. And I have tried and used many over a period of 30 years or more. There are several things about New Millennium Beginner Spanish that cause me to rate the program as very good.


But one of the main things that separates this one from the others is that the instructor has a very intriguing way of teaching Spanish. Throughout the lessons the instructor captivated my interest. While some other programs may have had native Spanish speakers, the instructor failed to hold my attention. Which means their cassettes or CDs eventually found their way to a storage shelf in my closet. But with New Millennium Beginner Spanish I always felt absorbed and involved with the materials.


I actually had to struggle not to give this program 5 stars and rate it as superb instead of the “very good” rating that I gave it. If I were 30 years younger or even 20 years younger, I probably would give it 5 stars. But at my age, I do not have as much of a need to learn Spanish for social media. And being the ravenous beefeater that I am, learning Spanish for veganism or reading/writing online reviews of the new and in vogue sushi restaurant is not the type of Spanish that will benefit me at my age. I simply have a greater need for learning Spanish for sightseeing or tourism in Latin America or Spain. But if you’re a young backpacker traveling all over Latin American and Spain, I’m sure that you will love New Millennium Beginner Spanish.

I'm please I took the time to listen to this audiobook. I will listen to it again.

Using modern vocabulary context in the lessons helps us learn faster and be able to use Spanish much faster in daily life. Thank you