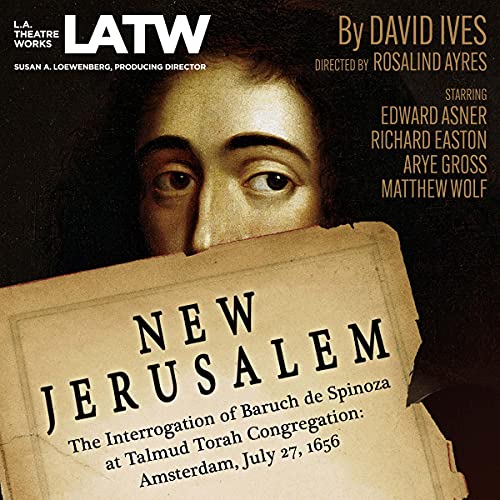 As a young Jewish man in 17th century Amsterdam, Baruch de Spinoza excelled as a theological student; but as he encountered free-thinking Protestants, atheists, and radicals in this relatively tolerant city, he began to question his religion and the nature of God. As a result, he was branded a heretic and faced excommunication.

Directed by Rosalind Ayres. Recorded before a live audience at the Skirball Cultural Center, Los Angeles.

What listeners say about New Jerusalem

A theatre play summarising the essence of Spinoza

LA Theatre Works' "New Jerusalem" is a short tongue in the cheek drama of Benedictus Spinoza/ Bento or Baruch de Spinoza's trial and excommunication from the Jewish community in 1656. Spinoza, one of a group of Portuguese Jews living in Amsterdam (the New Jerusalem), fearing the Roman Catholic fervour during the Counter Revolution is seen as the founder of Modern Critical Biblical Research.

The play brings out Spinoza's ideas and theology as in opposition to the Jewish way of life exemplified in the Babylonian Talmud during the 17th century. If you need a concise summary of who and what Spinoza was, you cannot go wrong by listening to this work. I think David Ives has captured the essence of Spinoza wonderfully. Concepts like Deism, Spinoza's own Panentheism and Atheism were illuminated and easily graspable,

The cast did a great job of bring the play to life, however... because I only could listen to it, I sometimes got confused between the various male voices. It is to expected if you cannot see the actors. While distracting at times, I found it still engaging and well presented.

I can heartily recommend this recording of a play if you want to understand a bit more of who Baruch de Spinoza was as well as the circumstances in which he was declared a heretic.