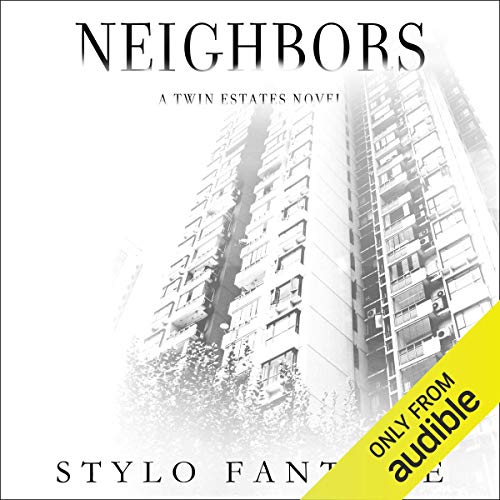 By: Stylo Fantôme
Narrated by: Grayson Ash
Try for £0.00

Things a good neighbor can do for you:

2. Let you borrow his lawnmower

3. Water your plants while you're on vacation

4. Make your eyes roll back in your head

Katya Tocci has never paid much attention to who lives next door - her career always kept her too busy. She's a good girl, working her way to becoming the most sought after cake designer in all of San Francisco.

But even a good girl's gotta cut loose once in a while, right? So one fake dating profile later, and she's ready to tarnish her squeaky clean image. Little does she know, her fun time is closer to home than she ever imagined.

Throw in a neighbor who wants to corrupt her, and another who just wants to own her, and her entire world is flipped upside down.

Who knew neighbors could be so helpful?

What listeners say about Neighbors

Grayson Ash has done a phenomenal job on the narration for this story. I was pulled in and never wanted to hit pause. Story wise: I’ve heard rave reviews on this story and I was not disappointed. Kayla decides to venture with her sexual side and things are never the same from that moment on. Liam is her neighbor that has so much to offer and a quickly becomes a great friend, then there’s a blast from the past and her old crush Wolf comes into the picture again and now begins the question of who’s team are you on? I’m totally #TeamLiam btw through and through. We’re given a sexy, twist and turn story that leaves you aching for me with a cliffhanger! I need to get on book two and find out what happens next. This is my unbiased and voluntary review.

First in a New Adult Duet

It’s been a while since I listened to Neighbors and The Neighborhood by Stylo Fantôme, and I am catching up on reviews, so this will be a little less detailed than usual. Interestingly enough, I like it more now, weeks later, than I did when I read it, because as I go to review it, I remember it well, which is actually pretty rare for me.

The thing is, I debated reading the second. If I hadn’t already purchased it, I’m not sure I would have gone on even though I wanted to see what would happen. For me, I think I am maybe a bit too old for this. I never really picked a “team” in this love triangle.

Katya Tocci was innocent and though beautiful, she was a bit buttoned up, beige and boring. Her career as a pastry chef was flourishing while her love life was floundering. That is until her roommate spiced up her online dating profile.

When Katya’s neighbor, Liam, sees his buttoned-up neighbor had an adventurous side, he brings her on a date to his sex club, which brought forth a new Katya, enjoying a sexual awakening with Liam. As she enjoys her newfound sexuality, she runs into her childhood neighbor and crush, Wulf. The demanding, closed-off and gruff Wulf has Katya a bit obsessed.

Here is where I want to yell “Run away little girl!” The mom in me wants to tell her to go for the fun one that makes you laugh, not the bad boy who is ridiculously closed off. Besides her childhood crush, I just didn’t see the appeal of Wulf. I know a ton of my friends were Team Wulf, but I just didn’t get it; he was a total a-hole to her except for those few glimpses of a heart that carried her through.

“No buts. The things he brings out in me are different. It's like ... you make me expand. You open my eyes and widen my boundaries. He makes me contract. My eyes only see him and he's my only boundary. You're both just so ... different. Completely different, in what you do for me, and how you make me feel.”

Katya was honest with both guys. She never cheated. And when her heart got involved she chose.

“Your vag**a is certainly in love with him.”
“My vag**a and my heart are two very different things. One is a lot smarter than the other.”

For me, I felt like Katya was an immature doormat for the first ¾ of the first book, if not the whole thing, but she redeemed herself, maybe too much, in the second book.

"Two men she'd been involved with, slept with, had deep, personal relationships with. Two men who'd empowered her and helped her grow and changed her very core. Two men who had used her and chewed her up and then spit her out. And now both those men were her close neighbors."

Katya grew some balls in The Neighborhood, and at first, I really enjoyed her finally standing up for herself. Then she took it too far and it went on too long.

"Your mistake is thinking that forgiving someone automatically takes away all the hard work that goes into the relationship. You think saying 'I'm sorry' should magically make the hurt and heartache go away. Well, it doesn't – 'I'm sorry' are just the first two words at the very beginning of a lot of conversations and a very long road of work."

I never really loved Katya, which is super important in my loving a book. She was too immature and her obsession with the guys made her even worse. I didn’t really see why she was into Wulf, he was a snobby jerk. And the one character I did like, Liam, lost a lot of that likeability in book 2, so in the end, I didn’t really love any of the characters.

•I remember it weeks later which is rare.
•Unique and original.
•Exciting twist I didn’t see coming.
•Love triangle done well, each knew about the other.
•Kept my attention, I needed to know the outcome.

•Multiple 3rd Person POV that changed even within chapters in the first book. Either I got used to it, or it was better in the second book.
•I felt Katya was too immature and a weak pushover in the first book, she got a little better in the second for a while.
•Katya’s insecurities were just too much.
•The 2nd book had too much filler and went on too long.
•I love an alpha-hole, usually. But I never warmed up to Wulf.
•Liam ended up just too immature.
•You always knew who she would pick, so the one she didn’t was kind of a third wheel.

The Narration:
I loved the narrator, she did a great job and I would love to listen to more from her. I think that this duet is probably just as good on audio as reading it.

The Down & Dirty:
I have really mixed feelings on this duet. It kept me interested and involved, but most of the time I was aggravated. The heroine was an immature doormat and both heroes had issues, one was too immature and one was a total a-hole. Frankly, in my mind, the happiest ending would have been if Katya moved away with her new sexual awareness and started fresh. I will say, as someone old enough to be Katya’s mom, that maybe I was just too old for this one, it is very much a 'coming of age' novel even though she is 23. I just wanted to warn her to run the other way from BOTH of them! I was happy to see Katya finally grow a backbone in the second book, but her ire went on too long and I felt there was just too much filler in The Neighborhood. So I liked Neighbors just enough that the cliffy made me need to know what happens in the second book, but if I hadn’t already bought it with the first, I’m not sure I would have continued. I am glad I did though because I actually liked The Neighborhood better than Neighbors.

This story has multiple layers

This story is sad, funny, romantic and in a way cruel. When I say funny I mean it is a scene that two of the characters Katya and Wulf are so angry at each other they start throwing and smearing Cake all over each other. You can’t help but laugh even knowing they are taking there aggression out and trying to quail there love and passion through this act.