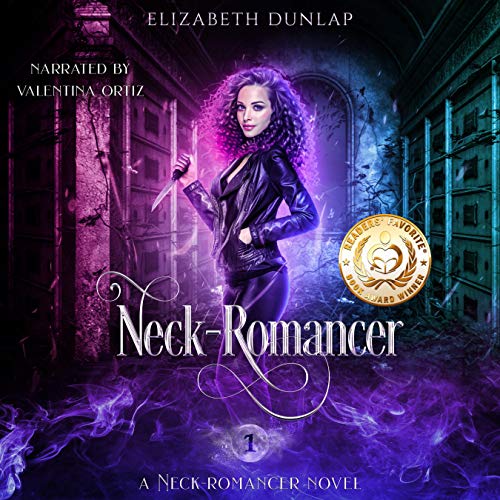 By: Elizabeth Dunlap
Narrated by: Valentina Ortiz
Try for £0.00

Goddess, a ghost is trying to kiss me. And I kinda want him to. Are you sleeping on the job again?

You think you’re having a bad day? Jaz Neck is suddenly being stalked by ghosts.
She thought things were bad when she lost her magic and was ostracized by her so-called friends. As it turns out, that was just the tip of the iceberg.

After struggling to reclaim her magic, she makes herself even more of a freak by becoming the only necromancer in existence. Nothing like giving the bullies at Highborn Academy a fresh supply of ammunition to harass her with....

The only upside to her spiraling social status is the shocking revelation that she’s been linked with three soulmates: a ghost, a lycan, and a warlock. But will their combined strength be enough to protect her from the dark forces rising?

What listeners say about Neck-Romancer: A Reverse Harem Paranormal Romance

Only 2 books so far in a long series

Cliffs ahead!!!
Loved this new series but I need the next one like yesterday! Highly recommend

This one was fantastic,I don’t want book 2 I need it the characters were just the type of people I wish I could meet in real life. There was no apologises given for snark and crankiness. I can’t wait to see where the author is going to take this series.

I was given this book free for an honest review .

Jaz was unable to reclaim her magic and people think she’s weird then her magic awakens and she’s a necromancer so now they think she’s an even bigger freak.
Loved this Jaz is so funny and takes bull from no one then she finds out she has 3 soulmates a ghost , a lycan and a wizard what can go wrong .

I loved this book, it was so dry and snarky it had me laughing out loud, Jaz was wonderfully outspoken and grumpy and at a complete loss at the sudden manifestation of her magic and mates. I can't wait for book 2, to see what's next for the group, the narration was great. I received this book in exchange for my honest review.

I listened to this book quickly. The fun and frisky plot had me yearning to keep listening, but the real star was the narration. Valentina Ortiz has a gift! The story really came alive. Loved the book ! Cant wait for the next one.

This is the first of the genre I’ve listened to - didn’t know what to expect. The story was interesting, even if I would have liked more detail and character development. Maybe we’ll get that in the next book.
I hope the same narrator will read book two - if that’s the case, I’m in. Her voice is sensual and soothing but also lends itself perfectly to sarcasm and sass.
Loved the polyamory and all the boys teaming up to support a fabulously powerful woman.

I say that because a lot of rh are more sex than plot. lm thrilled to say that this has much more humor, thought for plot, and enjoyable commentary from characters than straight sex. The sex is actually integral to the story. It is good story and characters more than straight smut. I definitely enjoyed it

For an audio book that costed around US$10, a 4 hour listen is way toooooo short (about half the time of other books)
Aside from that, the story was good, a good snarky FMC, and narration is good. Got used to Valentina Ortiz after listening to Bound Spirit

Apologies to the narrator because she did an awesome job. BUT, I could not stand to listen after about 30 minutes. The FMC was 20? BS - she was written as a 12 year old getting her period for the first time and not knowing how to deal with her emotions. At one point she legit threw a temper tantrum - stomping feet and everything. There was nothing likeable about her.

I only have one complaint... It was to short! I will definitely listen to the next book. Valentina was fantastic! I love that the characters are well written and snarky without being annoying 💜

This author loves writing quirky characters that make me laugh and pull me into the pages. Jaz has so many problems in her life and her attitude shows it. She lost her magic for some unknown reason and while visiting her grandmother she finds out she’s the first necromancer in four hundred years and that’s why she’s been seeing ghost for a long time. I can not wait to read/listen to the next book in this series to see what happens next. The narrator does a fantastic job

I love the content and the premises of this audiobook. The narration was excellent. Valentina Ortiz brought the book to life making the characters pop.
My one complaint is how the audiobook just suddenly ended. I don't mind cliffhangers, however, this just seemed to cut off awkwardly.
Thanks to Audiobooks Unleashed for the promotional in exchange for my unbiased opinion.

I was invested in this story, but the writing left a lot to be desired. The character development was lacking entirely. The storyline was interesting but way under developed. The ending I think was supposed to be a cliffhanger but it literally just stopped. Basically mid dialogue just stopped. 2.5 stars because I did like the story and I am interested in how it progresses but this author needs to put a lot more time, effort, and talent into this.

However, the narration by Valentina Ortiz was the shining star of this book. She sucked me in instantly and kept me interested with her portrayals of the characters. I will definitely be seeking out more books shes narrated.

I absolutely loved everything about this book. From the narrator to the characters and the story itself...everything. Jazz is witty, funny, sarcastic, amusing such a great character. Her soul mates are equally amazing. The storyline was great I can't complain. I kind of wish it was a little longer. All around a huge fan. I'm super excited for the next book.