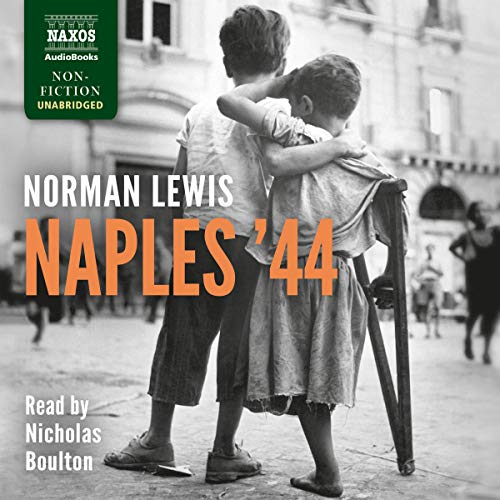 By: Norman Lewis
Narrated by: Nicholas Boulton
Try for £0.00

Naples '44 is an unflinching autobiographical account of a year in Naples after the armistice and Allied landings in Sorrento in 1943.

Working as a British counterintelligence officer under the Allied occupation, Lewis documents the rich pageant of life in the city and its surrounding areas. There is suffering and squalor: Criminal gangs are on the rise, along with typhus and black market commerce, and the female population is forced into part-time prostitution, simply to obtain food. Corruption is rife as a Genovese crime family member makes his way into the US army administration, and local hospitals, short on supplies, buy equipment back from those who stole it. There is farce and humor, too, witnessed in the Roman uncle paid handsomely simply to appear at funerals and lend an air of gravitas, and in Lewis's own experience of vetting proposed marriages between British soldiers and local women. Unsparing, penetrating and profoundly humane, Naples '44 is a moving portrait of the costs of war, and the resilience of a society under extreme stress.

What listeners say about Naples '44

This is an iconic history /travelogue/memoir of a dire time during WW2 with both sides in the conflict driven by hideous brutality. Lewis was an intelligence officer sent for a 13-month stint to Naples in 1943 which was then under the Allied occupation. It was written 30 years after these indelible events which heightens the feeling of experiences which can never be expunged from memory.

Naples was a hideous shock to Lewis and his section. Whilst they were housed and fed in part of a once-grand house, the local Neapolitans were surviving and not surviving under unspeakable privation, helpless casualties of a bitter war. Their fishing had been forbidden; desperate little blind children begged at the men’s table; women were lined up for the soldiers who paid for their pleasure with a tin of food and frequently VD; acts of sickening vendetta savagery were considered justified; typhus was rife. The locals driven by hunger to acts of extreme desperation stole army hardware and rations and killed any creature that could possibly be eaten. The officers nonchalantly sent men to be shot or thought it reasonable to interview innocent suspects with the ‘encouragement’ of cracking them over the head with a chair.During this terrible time Vesuvius erupted. Lewis’s description is superb – driving out to inspect installations he’s met by lava moving down the main road with the church cupola cresting the flow as the people prayed that the liquefaction of the blood of their patron saint would save their city.

Excellently read by Nicholas Boulton, it’s one of the most powerful works of war memoir, reminding us of the obscenity of war and of the courage and resilience of those who suffer in it.

recommended by my farther, a very eloquent, and detailed insight into his experiences at war. brought a very personal approach to such a massive subject. really enjoyed it

Perhaps one of the best books ever written on the affects of war on the civilian population of a desperately poor town suffering the events of famine .
Performance was excellent.. and totally suited to the text.
I found it very difficult and at times had to take a break.. it was the cause of at least one sleepless night..Norman Lewis writing is so observant and humane .. we see how dangerous and damaging war is.. The people of Naples were supposed to be saved by the Alias .. the British, Canadian, French and even Moors.. but what came across was a city Betrayed. by them.. the corruption and law had broken down.. the big villains got away with everything.. in fact anyone who could afford a lawyer were freed.. but the poor were spared nothing.. a man with a family to feed was sentenced to 10 years prison for
stealing a tin of meat.. when sentenced he cried how were his family were to survive..justice was inhuman.. totally lacking in humanity
Norman Lewis observed and reported and did what he could .. and felt he had failed and betrayed.. I will not judge but recommend that you listen to this and make your own conclusion..

Lovely little book, not so much a story but a diary of events which gives you a excellent insight into life in Naples and surrounding area. Highly recommended.

Lewis is appalled and impressed, perhaps horrified and enchanted, by the place his shambolic high command has sent him.

Naples at the moment of allied invasion under the disastrous command of General Mark Clark, the typical random chaos of war, 95% boredom and 5% terror, provides and informs the background upon which this master of the English language practices his art.

A Naples of deprivation, destruction and desperation. Not the staggering and horrifying slaughter of Dresden or Warsaw, but a tangible tragedy you can almost touch and smell.

The descriptive, informative and very personal insights with which Lewis illuminates this still 19th century Naples are 5 star all the way.

Travel guide, history and the war in 1944

A lyrical commentry on Naples in 1944 complete with a travelogue and history of the area and Italy. The travails of a starving population to tha backdrop of Vesuvius and the beauty of Naples allbeit destroyed. An immense joy of a book.

Not my usual read but I am pleased I listened to it. Whilst watched 'write around the world' with Richard E Grant, I happened upon it this book.The contents of this book should never ever be forgotten.

Humor and history. Great mix of both. Been to visit Naples and learned it was the most bombed city of WWII. Great descriptions of how this left the city and its citizens