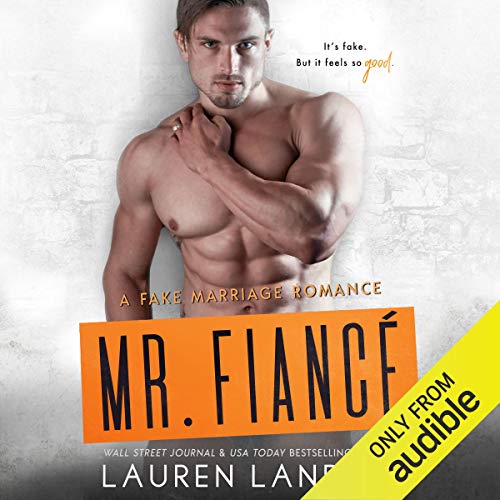 By: Lauren Landish
Narrated by: Holly Warren,Jean-Paul Mordrake
Try for £0.00

It's fake, but it feels so good.

Oliver Steele is supposed to be my knight in shining armor. He's tall, handsome, and as cocky as he is rich. With his good looks and charm, no one's going to suspect a thing. No one's going to believe our engagement is fake. But he's taking this thing way too far. The way he wraps his arm around me like I'm his. The way he kisses me and presses his hard body up against mine. I almost believe that it's real. Almost.

He's doing it on purpose now; he loves that this is getting to me. Two can play his game, though. I won't let him win. By the time our week together is done, I'll leave Oliver on his knees and begging.

But the minute we're alone in the bedroom, I know I'm in over way my head. When he undresses me with his eyes, I realize I lost before the game even started. It's only a matter of time before I lose myself in his touch and let him do whatever he wants to me.

I know what I want, but I can't tell what's real anymore.

Mr. Fiancé is a full-length romance with an HEA, no cheating, and no cliff-hanger!

What listeners say about Mr. Fiancé

Lauren Landish has written another great full of life love story EVEN if that's not how he starts off or planned for both of the fake couple, Mindy & Oliver.
Both the authors did a good job in their narrations.
REALLY Recommend Mr Fiancè....

So Hot!! I reviewed this book for the author. I love reading Lauren's books. Holly Warren and Jean-Paul Mordrake are a great team together. They make both characters come to life. I can't wait to listen more from these two.The characters are well developed and easy to love and it feels like you've known them in real life. I love the fun banter between the characters and how the relationship changes. It has an easy flow which makes the book an easy to read. I am a fan of this author and after reading any of her books you will be too. Keep up the awesome work girl! Can't wait to read your next story. I highly recommend in reading/listening to Lauren Landish's books.

Mr. Fiancé in audible is such a great addition to the book! The chemistry is undeniable between Mindy and Oliver! I loved the dual POV and her sister Roxy is a hoot. It was funny and a heartwarming romance! I would definitely recommend this audible book! I am voluntarily leaving my honest review after listening to this arc.

This is book 2 in the series. This is a great fantastic story that will blow the listeners mind. It has it funny moments also . The author knows how to draw you right into the story. It has 2 control freaks that both one to get one up on the other Hero is Oliver and heroine is Mindy . You meet Mindy in the first story in the series.
Mindy is caught in a bind She’s been lying to her mom about her love life. Mindy has to come up with a quick date a pretend Fiancé. Only because her mother is getting married. Who comes to Mindy rescue but Oliver . The interact between Mindy and Oliver are to dye of laughter.
Grab this and enjoy your day and be filled with love

This was an interesting follow-up to Anaconda. While it features Brianna's best friend Mindy and includes Brianna and Gavin in the story, it's an entirely new cast of characters. Oliver, the male protagonist of the story, was never mentioned in the first book of the series. Additionally, we never really get much background on him and how he came to be part of the story other than that he met Gavin a couple of years ago and is still an acquaintance of his.

The story revolves around the fact that Mindy lied to her family about having a fiancé named Harold to please them and get her mother off her back. Now that her mother is getting married, that lie is coming back to bite her in the butt. She needs a fiancé, stat. Gavin, having become very good friends with her since he started dating Brianna, her best friend, cares for her and finds a way to help her out. He finds her her Harold, who then refuses to go by Harold. Mindy and Oliver don't really hit it off and start out their farce with a rather adversarial relationship. As was pretty much expected, the two become close during their week with her family and the sexual tension becomes too much to bare. Love results and then pride gets in the way until the two manage to find their HEA. The story has no cliffhanger and could be read as a stand-alone if desired.

O what a difference the narrator makes...

I'm so glad the narrators changed for this book. I enjoyed the story for Anaconda however narration was not pleasant. Mr. Fiance' was different. Not only did I enjoy the banter between Oliver & Mindy, the narrators brought it to life for me. A must listen if you need a bit of laughs & a lot of loving...:)

Would you try another book from Lauren Landish and/or Holly Warren and Jean-Paul Mordrake ?

I will try other books, hoping for better

Has Mr. Fiancé turned you off from other books in this genre?

Would you be willing to try another one of Holly Warren and Jean-Paul Mordrake ’s performances?

the writing between Oliver and Mindy isn't the best

I have read and reviewed this book as an ebook. However this rendition brings a new dynamic to the story. In this book we get more of Mindy's story and are introduced to Oliver. These characters will have you hooked from the very beginning to the very end. I would highly recommend this to anyone and everyone

one of the sexiest male narrators

I enjoyed the book but was frustrated by the female character's passivity. saved by excellent narration.

I really enjoyed reading this author.  I look forward to reading more books by this author in the near future.