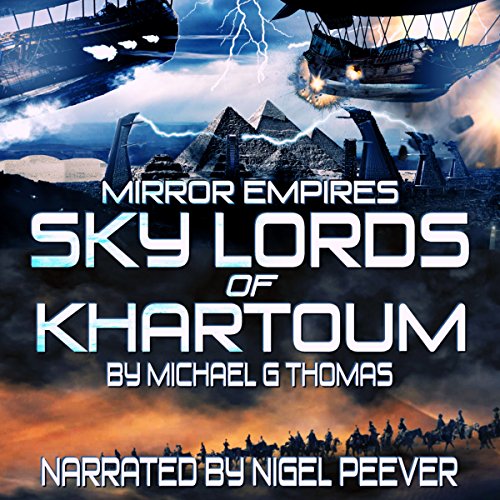 By: Michael G. Thomas
Narrated by: Nigel Peever
Try for £0.00

Welcome to the Mirror Empires, where reality is distorted, and war threatens to engulf the world. It is 1898, and soldiers armed with the latest weapons clash with the unstoppable power of the Sky Lords and their aerial armadas in new and uncharted realms.

Jack never expected to spend his 19th birthday crashing a stolen flying machine into the middle of a war. But when he saw soldiers with bolt-action rifles up against an advanced species, he knew he’d found something incredible. As they storm Khartoum’s fortified city walls, Jack and the soldiers are transported to an impossible version of their own world. One where great cities rise up into the sky and are endlessly circled by flying warships crewed by beings never seen before.

As they set out to explore this strange land filled with violent tribes and vicious creatures, they uncover a brutal regime that takes slaves and technology from every mirror world they can find. Known as the Sky Lords, they are protected by legions of warriors who travel the skies in their flying warships, and they will stop at nothing to destroy the newcomers and retake the city that links the Mirror Empires together. It is a world where the rules of science and technology have been smashed to their very core.

What listeners say about Mirror Empires: Sky Lords of Khartoum

This is the first audiobook I’ve listened to that is jam packed with sound effects which adds brilliantly to the enjoyment of the story.

The book is well written by Michael G. Thomas and the narration by Nigel Peever was awesomely good. His vast array of voices perfectly complements this British Colonial fantasy adventure, especially the Colonel.

This novel is akin to a 19th century version of Stargate SG1, so fans will love it.

It is based upon the use of an orb that acts as a portal which connects other worlds or dimensions, resulting in the trapped adventurers battling to survive, escape enslavement and even avoiding their potential deaths. All in the hope of finding a way to return safely back home to their own world.

So sit back and enjoy this delightfully enhanced audio adventure.

This audio book was requested by myself and provided free by the narrator
The review I have given is voluntary and solely my opinion of this audiobook, which is completely independent and unbiased.

Wow, what a great performance! This was more than just a regular narrated book, it was like having a movie on the tv but with no picture!
Nigel narrates it brilliantly, but he’s accompanied by a barrage of sound effects and musical enhancements... such a great show! I know sound effects aren’t to everyone’s taste, but this goes beyond just ‘sounds effects’ and deserves to be heard!
The story is really good too, like a cross between Indiana Jones and Stargate! Looking forward to the follow up!!
This is my honest opinion of a free review copy.

Very intriguing and exciting adventure. This is a good audio book fantasy to listen to.

What can I say about this book it has it all Portal 2 mysterious world khaki clad British soldiers a Victorian adventurer
War ships in the sky why is absolutely brilliant rip-roaring adventure.
The performance is great with great sound effects the character voices are brilliant give it a go you won't regret it.

pulp action adventure at it's finest.

Enjoyable and engrossing audio drama. As stated above, this is pulp action at it's finest. As I was listening i couldn't help but think of John Carter's or Allen Quartermain's adventurers or Journey to the Center of the Earth. The environmental audio effects are a nice touch and adds to the immersion, though in parts they over-powered the narration slightly. The narrator did an excellent job voicing all of the characters and setting the tone of every scene.

Get ready for an amazing audio drama!

Wow - the production quality is just OUT OF THIS WORLD GOOD! This is fully produced audio drama at it's best! Be prepared to be transported to another time and place and enjoy a truly epic story. If this is any indication - I can't wait to purchase and listen to the rest of the books in the series!

The Battle of Khartoum occurring in two dimensions

This was an exciting portal/steampunk adventure in which Earth soldiers from 1884, hapless and disciplined alike, find themselves shifted to a jungle world populated with mean beasties and very nasty people, some of who appear to have originally come from Earth, and who want to return as despotic conquerors. A mixed team of Earthly and native freedom fighters must prevent such a disaster by destroying the Orb that opens the portal. Battle ensues with ray guns and airships, hurrah! and the Orb is destroyed, but the danger is not over yet. The narrator differentiated characters well.

The narrator went to town on this one.
At times the soundeffects disturbed too much.
I liked the colonel character, he was a loveabke chap. Albeit a tad of a kliché archetypical character.

This is a Sci-Fi story that is refreshingly different. Science, technology and fantasy interwoven with a touch of nostalgia of a time before the world wars. The story is very well written and the characters nicely developed. I appreciated the characters not being perfect in looks, actions or thoughts. Also when the author describes how things work he doesn't bog the story down, he gives just enough information to help the listener understand and no more. The narration was excellently done but I've come to expect nothing less from Nigel Peever. It's mind boggling that it is only Mr Peever as the narrator. His talented voice changes to accommodate the many different voices. The sound effects really bring the story to life and truly immerse the listener in this wonderful world. If you enjoy enhanced Sci-Fi stories then you really need to check out this one! It was very entertaining and well worth the time.

nigel peever had a great way of bringing a story to life. I've not heard a story line like this one, time travel with an orb. and a wicked overlord. good one.

This was an enjoyable listen. It's style is a blend of older sci-fi stories and the classic adventure stories written about English gentleman adventurers back before the world wars. Which make sense as it's set in that time period. Great job at capturing that nostalgic sense of adventure without making it feel over done. There was the barest hint of romance but it was overshadowed by the adventure. It never got awkward or mushy ... yay!

Pro's: There is a LOT of action which I love and it's well written. There is also a touch of steampunk in some of the devices used for transportation. In the science part there is an attempt to explain how things worked but it doesn't get bogged down with too much detail. Michael G. Thomas had strong female characters that were actually relate-able, albeit they were alien women but I don't care ... I'll take it! Strong English warrior women would not have been the norm in that time period. Also the writer didn't fall into the rut of making all the women beautiful and dressing them in sexy armor. It was their strength and ethics that made them beautiful. YUSS! Thank you sir!
The narrator is very impressive. I forgot at times that Nigel Peever was the ONLY narrator. I've been meh about his female voices in the past but I didn't notice so much this novel. Maybe because he imparted strength into the female characters? Or I could be getting used to his "feminine" voice ;) Either way, keep an eye out for books with his narrations. He is in my top ten narrator list.

Con's: The background music in some area's became repetitive, especially the New Age stuff that provided a back drop to the alien master overlords. A couple times the music was a bit too loud for the narration to be heard clearly. This is NOT a critique of the use of such sound effects as I really enjoy this kind of production.

I would definitely recommend this audiobook

I received this audio book for free in exchange for my honest review. This is a great story complete with sound effects. The writing and narration makes it play out like a movie in your head. You won't be disappointed with this one. Enjoy!