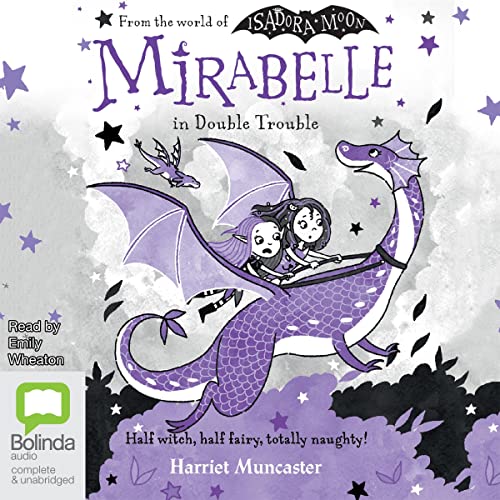 By: Harriet Muncaster
Narrated by: Emily Wheaton
Try for £0.00

Half witch, half fairy, totally naughty! Mirabelle is Isadora Moon’s cousin who we first meet in the author's famous Isadora Moon series.

Mirabelle is going on holiday with her family to a fancy witch resort, and she can't wait! She has promised her parents that she will absolutely not get up to mischief this time. And she really means it too.

The witch resort is everything Mirabelle had hoped for and more! Better yet, she makes a new friend called Bea. Then Mirabelle makes a worrying discovery - Bea is even more mischievous than Mirabelle, and she quickly finds herself in a whole heap of trouble...especially when a dragon gets involved!

Will Mirabelle's family believe that Mirabelle is (mostly) innocent this time, or is it just a case of double the trouble?

What listeners say about Mirabelle in Double Trouble

We loved Isodora Moon, the sets have 4 stories on but this is only one. Not great.