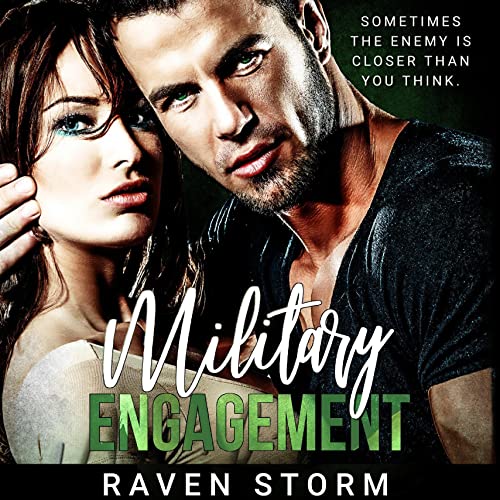 By: Raven Storm
Narrated by: Viola Papillon
Try for £0.00

I'm was trying to start over after a bitter divorce when I met the lieutenant.

I didn't care that his hazel eyes burned with an inner fire and sadness, and I tried not to notice how his black shirt clung tightly to his well-defined muscles.

My ex-husband had taken pleasure in telling me no one would want a 30-some divorcee, but the next thing I knew the good lieutenant had me down on the stairs, ravishing me within an inch of my life.

He's an enigma in this town - a war hero who walks around with hunched shoulders and pain in his eyes. No one is close to him. No one knows his secrets.

He's rough. He's unrestrained. He says he'll just break me, like he's done to everything else in his life.

I plan to prove him wrong.

Passions abound in this steamy, small-town romance with a HEA. Military Engagement is a stand-alone novel. This audiobook contains adult language and situations, including depictions of PTSD.

What listeners say about Military Engagement

The only reason I don't give it 5 stars is because it seemed a bit rushed. Could have added even more detail to make it that much better!

Divorcee Elli, is starting over in a small town after a messy break up. She is so used to being put down and walked all over, she finds it hard to look people in the eye.
Lt. Clay Williams is a reluctant war hero, who would rather spend his days in the bottom of a bottle than deal with his PTSD.
Apart, they are broken, but together they are whole.
The pair must navigate between the darkness that wants to consume Clay's mind while dodging the towns crackpot conspiracy theorist and Elli's Journalist ex-husband, who is sniffing around for a story.

This book is well written with great imagery, and captures the tourment of PTSD and how it can lead to other vices just to get through the day.

No spoilers but i am happy to say it ends in a HEA.

Well done to the author, Raven Storm, for this great and thought out book.

I also want to commend the narrator, Viola Papillon, for her clear, precise reading of this book. She did it a major credit with her excellent voice changes, punctuation and use of emphasis.