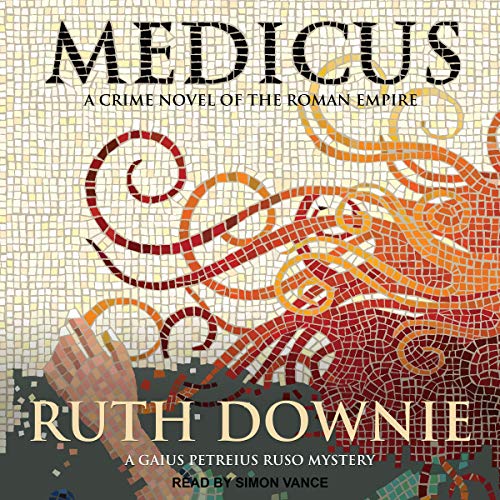 By: Ruth Downie
Narrated by: Simon Vance
Try for £0.00

Gaius Petrius Ruso is a divorced and down-on-his-luck army doctor who has made the rash decision to seek his fortune in an inclement outpost of the Roman Empire, namely Britannia. His arrival in Deva (more commonly known today as Chester, England) does little to improve his mood, and after a 36-hour shift at the army hospital, he succumbs to a moment of weakness and rescues an injured slave girl, Tilla, from the hands of her abusive owner.

Now he has a new problem: a slave who won't talk and can't cook, and drags trouble in her wake. Before he knows it, Ruso is caught in the middle of an investigation into the deaths of prostitutes working out of the local bar.

A few years earlier, after he rescued Emperor Trajan from an earthquake in Antioch, Ruso seemed headed for glory: now he's living among heathens in a vermin-infested bachelor pad and must summon all his forensic knowledge to find a killer who may be after him next.

Who are the true barbarians, the conquered or the conquerors? It's up to Ruso (certainly the most likeable sleuth to come out of the Roman Empire) to discover the truth. With a gift for comic timing and historic detail, Ruth Downie has conjured an ancient world as raucous and real as our own.

What listeners say about Medicus

I'm hoping a successor to Falco!

I've been a Falco fan since I first heard the dramatisations of the earlier books on Radio 4 with Anton Lesser (available on Audible, like the whole book versions with a number of narrators of varying quality!). So I've heard them all, and have been looking for another series of historical mysteries especially in Roman Empire times. I don't want just wars, armies and blokes being macho. So some series have been returned to sender!
I don't want Latin chick lit, just some continuing characters I might like or hate.
Ruso seems to fit the bill, so far, and Simon Vance reads well, with a rather neutral English accent which is easy to listen to, but has developed a recognisable accent for the British characters- - sort of mild Ulster or Ulster-Scots diffentiates locals from invaders.
The English hadn't arrived yet!!
Simon Vance has however developed some American pronunciations which come across like an obscenity in a sermon - unexpected wrong notes, like privacy- just a clunk in an otherwise good performance. There does seem to be a tendency for writers of European origin writing about European events to adopt US English, no doubt hoping for bigger sales, Martin Walker's Bruno novels being a prime example, but diversity of language is part of literature!

I am a glutton for a whodunnit! I found that I could put it down but as I listen to them to get to sleep (blocking out all other thoughts) I did keep rewinding. I found the characters well performed and enjoyed it so much that I have downloaded the second novel for my holiday. Appparently, according to reviews, it is even better.

As above. Might be ok if half the length and not such a clueless hero.

Held my attention from the beginning

The narrator used a range of distinguishable voices to help keep the story clear and flowing. This is a good story enhanced by the telling

Excellent in all respects

I would recommend this audio story to anyone. I have read all of the Ruso series. This is the first one. The storyline of all of this series is excellent and the characters and the relationship between them so ver believable. The humor is subtle but there and well done

Intriguing but perhaps over long

An engaging story with a rather predictable end. It would benefit from some more editing though. I’m not sure I learned much more about life in Britain under the Romans. The reader portrayed each character with a distinct voice, which helped the story to flow.

so boring a story I kept falling asleep, or my mind wandered onto more interesting things like watching the grass grow!

A great romp through ancient Britannia. The author is knowledgable and a good writer. Great characters

Loved Ruth Downie's books and thought they would make a good listen for a long journey. Simon Vance reads superbly, brings Roman Britain vividly to life. All the characters are very well portrayed. Just bought the second in the series for my next trip!

Took Me by Surprise

The similarities to Lindsey Davis's Falco are present and obvious, so I didn't expect much more than a takeoff. I was so wrong. There was plenty that was fresh and enjoyable. The plot is very absorbing, the hero is likable and engaging, and there's ample, if gentle, humor. Except for the unreliable best friend, none of the characters were stock, and some were very startling. Ms. Downey is less didactic than Ms. Lindsey with the historical info, and that had pluses and minuses. On the one hand, I had to do more guessing by context on terms, but it also allowed for a free flow that I enjoyed. I would definitely recommend this.

Audio: After a recent series of horrible readers, this was a great pleasure. The reader has a pleasant voice, is a good actor, and delineates the characters beautifully. And unlike most male readers, he does a good job with the females, using timbre instead of pitch, thus sounding like real women rather than impersonators or elderly aunts. He's top drawer on this one.

Murder on the Roman Frontier

The British paperback title of this book is Medicus and the Disappearing Dancing Girls, which probably gives a better idea of the lively nature of this story about a divorced military doctor stationed in Roman Britain in 117 AD faced with the mysterious murder of local tavern girls.

The author has very good comic timing as Gaius Petreius Ruso tries to cope with all of the problems attendant on being on the edge of the civilized world, as the Romans knew it. Whether it involves buying his first pair of wool trousers or his efforts to find a good cook or dealing with hospital bureaucrats, Ruso's trials provide an entertaining diversion.

The narrator is Simon Vance who also narrated The Fourth Bear. His occasional reuse of a voice from that other book is a bit disconcerting, however, overall he does very well indeed.

You are there in ancient Britain

This is a thoroughly enjoyable murder mystery and imaginative recreation of ancient Britain in the early days of Roman occupation. Humorous and colorful.

The first installment of a highly entertaining mystery by British writer Ruth Downie. The Medicus, Ruso, an army doctor becomes a reluctant detective who tries to solve a murder mystery in the Britannia port of Deva. Along the way, he matches wits with Tilla, his slave girl, the hospital thug, and the women of the bordello, to hilarious results. Top it off with excellent narration by the great Simon Vance, and you've got a good read.

As always, Simon Vances is a joy to listen to, his narration flawless, each character distinctly drawn by the voices he gives to them. After a bit of a slow start, the book picks up its pace and provides a fascinating look into Britannia under Roman rule. Most enjoyable for anyone who loves historical fiction.

This is a great book, the characters are very likable, it is interesting, humorous and credible.
It is read by Simon Vance, who is, as always, an absolute pleasure to listen.
To give you an idea of what I like, I spent 6 moths reading Patrick O'Brian (the audio books are also read by Simon Vance, by the way) and a year reading Terry Pratchett.

The story is pleasing, the tone is enjoyable. The characters are fantastic. The narrator is good (not Scott Brick good, but only 3rd narrator I want to try books based on his voice).

I can think of nothing bad to say about this bood. I heartily recommend it

Given the setting (Roman Empire Era) I didn't expect to like it. Was surprised to throughly enjoy the book. Good character development and enough surprises to keep one interested.

Entertaining--not historically accurate, but the main character is determinedly grumpy and yet a softie on the inside! I'd love to see a continuation of the series, it was worth listening to.