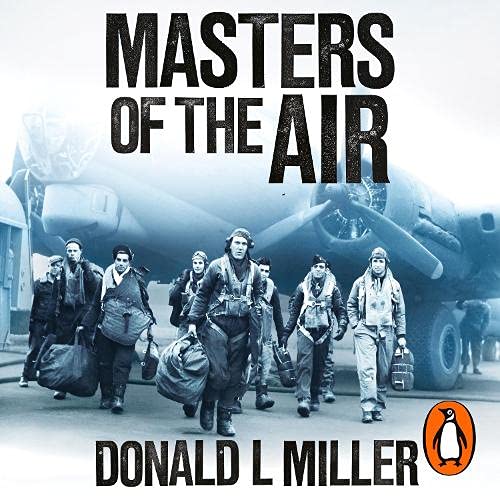 Masters of the Air

By: Donald L. Miller
Narrated by: Robertson Dean
Try for £0.00

‘Seconds after Brady’s plane was hit, the Hundredth’s entire formation was broken up and scattered by swarms of single-engine planes, and by rockets launched by twin-engine planes that flew parallel.'

Meet the Flying Fortresses of the American Eighth Air Force, Britain’s Lancaster comrades, who helped to bring down the Nazis.

Historian and World War II expert Donald Miller brings us the story of the bomber boys who brought the war to Hitler's doorstep. Unlike ground soldiers, they slept on clean beds, drank beer in local pubs and danced to the swing music of the travelling Air Force bands. But they were also an elite group of fighters who put their lives on the line in the most dangerous role of all.

Miller takes listeners from the adrenaline-filled battles in the sky, to the airbases across England, the German prison camps and onto the ground to understand the devastation faced by civilians.

Drawn from interviews, oral histories and American, British and German archives, Masters of the Air is the authoritative, deeply moving and important account of the world's first and only bomber war.

What listeners say about Masters of the Air

Dinitively the best coverage of the Americans european bombing war, well balanced and fair. The author has gone to great lengths to include bona fide inclusion from the highest rank to the lowest, first hand experiences in just about every circumstances during the war. The narrator reads flawlessly and in a highly listenable tone. From a British perspective I found this an excellent and informative audio book in high lighting the crucial contributions both countries played in defeating Germany from the air.

Masters of the air

Awesome book, full of detail from the end of ww1 right through to the end of ww2 , you will not be disappointed (even though the narrators voice is a bit drawl at times lol ) 10/10

very well read by the narrator. moving overview of lesser known topics such as Auschwitz, pilots PoW experience, experiences of POWs in Switzerland. by the end you feel you have been on a journey from the beginnings to the first months after the war. in short very recommended.

A comprehensive guide to the incredible story that is the American air war in Europe between 1942 and 45. Well researched and comprehensive. I enjoyed the work on the downed airmen and their particular story. I would thoroughly recommend this major work.

Struggled to get 4 hours into this very comprehensive and detailed book which I'm pretty sure would be a good read, but spoiled I'm afraid to say by the monotone droning of the narrator who uses the same deliberate, robotically dry delivery for all scenes, be they humourous or distressingly emotional.

Only two mistakes that I noticed.

There was a couple of references to the Buchenwald Concentration Camp that were wrong, where he states that Buchenwald received a FIRE STORM, The bombing was very accurate and landed on the Wilhelm Gustuff Werks II. And there was where he visited the Crematorium which had run out of coal about two weeks before the liberation, so the ovens where cold by the time he3 visited. I happen to know this is true because I HAD BEEN AN INMATE SINCE 1942, WHEN I WAS 5 1/22 YEARS OLD

This was an interesting story, no one should take away from the bravery of the crews. Unfortunately to many were lost due to the beliefs of politicians and the bomber hierarchy sending men on foolish missions without adequate protection, believing their own hype.
As shown in the storyline although they professed pin point accuracy this was not achievable with only 2% actually bombing the target. Only made believable by good publicity.
Was also surprised to read of the swiss internment of allied prisoners and their support of nazi’s which i wasnt aware of.

25 hours long and still too short. Good narration too, I loved this book.

Excellent listen. A very, very good book. Only issue I have is with the narrator not knowing how to pronounce some names. 'Willem Shaven' for 'Wilhemshaven' for example.