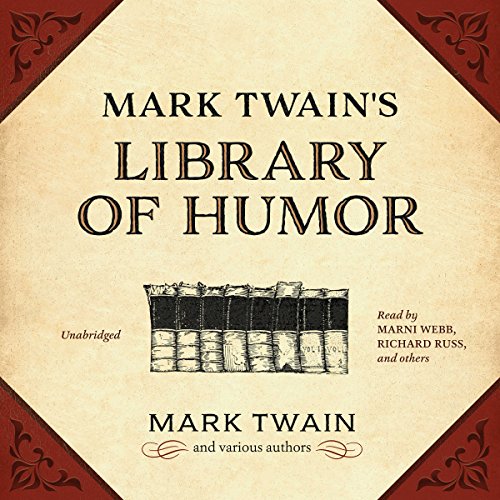 Master wit Mark Twain selected these 27 stories himself by 15 of his favorite 19th-century authors. The order follows that which Twain placed them in in the original anthology, published in 1888. He indulged his comic fancy rather than making a textbook in which all themes or authors are placed together, saying that "This way you will have to peruse the whole thing before discovering that one of your favorites is not included." However, it is no joke that these are the authors represented: Charles Dudley Warner, Thomas Bailey Aldrich, Eugene Field, William D. Howells, James M. Bailey, Joel Chandler Harris, Katherine Kent Child Walker, Robert J. Burdette, Sam Davis, Artemus Ward, Harriet Beecher Stowe, Francis Lee Pratt, Oliver Wendell Holmes, Frederick W. Cozzens, and Twain himself.

What listeners say about Mark Twain's Library of Humor

Good stories, some of which are well narrated, but not as interesting as the title suggests. These are mainly stories by other authors, not Twain. And while some are quite good, others are downright boring. OK for historical perspective.

Kind of a humor anthology

Be prepared to grow your vocabulary a bit, you'll likely need to look some words up. Also the time period is pre-Civil War. These are not criticisms; just so you know this isn't 20th century humor.

The narration is excellent in my opinion. The readers actually understand the material and give life to the characters and voices.

Where does Mark Twain's Library of Humor rank among all the audiobooks you’ve listened to so far?

Twain, talented expression of the times.

Which character – as performed by Marni Webb and Richard Russ – was your favorite?

The guy who slept alone in a warm bed.