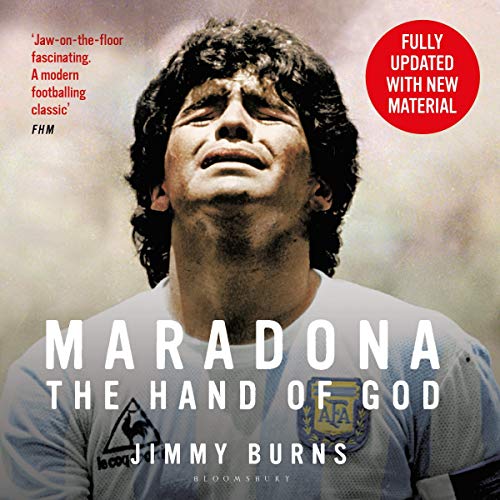 By: Jimmy Burns
Narrated by: Paul Thornley
Try for £0.00

Anyone doubting that Diego Maradona was more than just a football player had only to witness the outpourings after his death on 25th November 2020. During his tempestuous life and career, he played for top clubs in South America and Europe, notably Napoli, where he became an adored hero and adopted son, and grew to be a legend in his homeland of Argentina after leading them to victory in the 1986 World Cup.

Having gained access to his inner circle, Jimmy Burns traces Maradona’s life from the slums of Buenos Aires, where he was born, through his great years of triumph, to the United States from where, in 1994, he was ignobly expelled after undergoing a positive drug test. He also tells of his failed attempt to bring further glory to Argentina as coach in the 2010 World Cup, and ultimately, his tragic decline and recent death.

Widely regarded as the best and most revealing account of the highs, lows, genius and flaws of arguably the greatest footballer of all time, this biography inspired Asif Kapadia’s award-winning 2019 film Diego Maradona.

"Love or hate the man, his is one of football’s greatest stories and so this is the best football book in ages." (Goal)

"If [those interviewed in this book] are my friends, I prefer to have enemies." (Diego Maradona)

"Burns’ forensic skills are to the fore in this deft, perceptive study of politics, corruption, exploitation and the occasional dash of genuine sporting genius." (Time Out)

What listeners say about Maradona

It’s a shame the author too many times ridicules Diego Maradona with childish name calling in relation to his physique. Then pretends to know what’s happening in his head as to why he does the things he does. The delivery of the narration was annoying at times too many mistakes like “San Pablo” stadium. Story is a classic rags to riches just a boy who wanted to play Football.