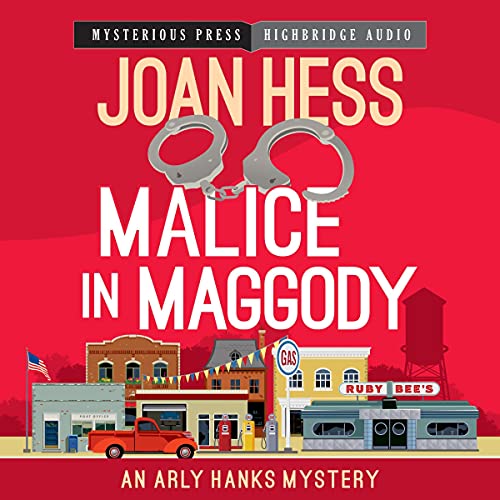 Her marriage over and career gone bust, Arly Hanks flees Manhattan for her hometown: Maggody, Arkansas. In a town this size, nothing much ever happens, so Arly figures she's safe as the town's first female chief of police - until the husband of one of the local barmaids escapes from state prison and heads for town. And that's not all. An EPA official with ties to polluting the local fishing hole has suddenly vanished off the face of the earth.

As if two manhunts aren't enough to contend with, a body has been discovered at the pay-by-the-hour Flamingo Motel, shot clean through the neck with an arrow. For some reason, Maggody's residents - all 755 of them - have gone tight-lipped, stonewalling Arly's investigations, and Arly hasn't a soul to trust but her half-wit deputy. Now, as Maggody's finest, she'll have to show a little muscle and a lot of cunning to curtail the inhospitable mountain malice that's overtaken her town. And she'll have to watch her own back every step of the way.

What listeners say about Malice in Maggody

A bit of fun

A great light read for a Sunday afternoon. Bit of a laugh and buffoonery. The narration is great, the wry tone is perfect.

An amusing, if not memorable book

I was not quite sure what to expect from this first book in the Maggody series. What I got was a light mystery and some amusing characters. Nothing terribly original, but far from bad. The book acts more as an introduction to the small southern town of Maggody and it's local characters. Arly is the police chief and likely the smartest person living in this rather stereotypical hillbilly town of none too bright schemers and people just trying to get by.

Again, the book is not bad by any stretch and I did find myself laughing at a few situations. But personally, I didn't find enough to make me want to come back for the rest of the series. I hope you have a better time visiting Maggody.

Should Ma and Pa Kettle arrive in Mayberry with their family and friends packed onto Pa's wagon
a fine movie would be born. The Egg and I with
Green Acres and the Beverly Hillbillies- we'd be
rolling in the aisles. This Maggedy series is a sweet trip to the American West in the 21st
century.

Part way through chapter 1, I wasn't sure it was going to be my kind of book, but I'm glad I kept listening. Good mystery, funny situations, unique characters. Definitely worth the listen.